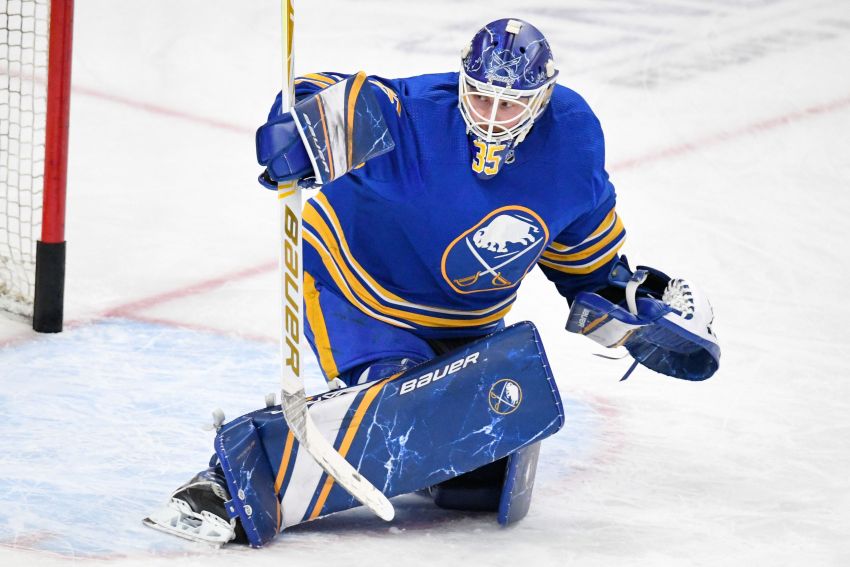 So, does that mean Ukko-Pekka Luukkonen will be recalled? General manager Kevyn Adams said Thursday the top goalie prospect could make his NHL debut this weekend.

Luukkonen, 22, hasn’t been summoned yet. Granato said the Sabres would determine his status later today. The Finn has been recovering from a lower-body injury and missed the Rochester Americans’ last game.

The Sabres need to add a goalie to their taxi squad.

“We’re clearly trying to get him integrated with us,” Granato said on a Zoom call following this afternoon’s practice.

The Sabres host the Pittsburgh Penguins on Saturday and Sunday afternoons at KeyBank Center.

Adams said the Sabres used an emergency backup as their taxi-squad goalie for Thursday’s 5-2 road win over the Washington Capitals.

The Sabres lost all 15 games Ullmark recently missed recovering from a lower-body injury. He has emerged as their MVP and backbone, recording nine of their 11 wins this season.

The Swede left Tuesday’s 3-2 shootout loss to the Boston Bruins after gloving a puck 4:54 into the game.

“It’s week to week and we don’t have many weeks left,” Granato said of Ullmark’s injury. “So that one’s a little touchy.”

The Sabres have 13 games left over the next three weeks.

Goalie Dustin Tokarski played Thursday, earning his first win since Dec. 12, 2015. Michael Houser, who has no NHL playing experience, backed him up.

“As he uses his body more, we’ll be able to tell where he’s at more,” Granato said. “So there’s no real information other than he’s currently skating.”

Granato said Okposo was visiting doctor today and the Sabres will have more information Saturday.

Meanwhile, Granato said Sheahan is day to day with “soreness” after taking a hit Tuesday.