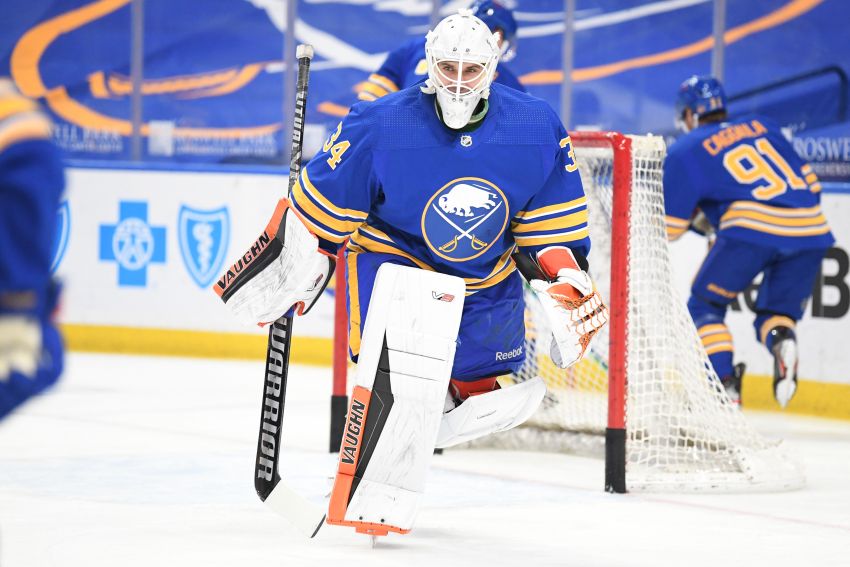 BUFFALO – On April 10 in Fort Wayne, Indiana, goalie Stefanos Lekkas played his last game for the Komets, an ECHL team, allowing five goals in a loss to the Indy Fuel.

Twenty-three days later, Lekkas was in the NHL, serving as Sabres rookie Michael Houser’s backup for Monday’s 4-2 win over the New York Islanders at KeyBank Center.

The memories of the night will forever be seared in Lekkas’ head.

“Just to go through the game day process, go through the warm-up and be part of a win is obviously something I’ll always remember,” an excited Lekkas said on a Zoom call Tuesday morning, hours before signing a one-year, $700,000 contract. “Just being here for however long it ends up being makes you really want to earn more chances and stick around.”

Lekkas, 25, will likely stick around for the rest of the season. With goalie Linus Ullmark still working his way back from a lower-body injury, the Vermont product backed up Houser again in Tuesday’s 4-3 shootout win over the Islanders, the home finale.

Goaltenders, of course, can often be at a premium, and injuries have forced the Sabres to use a whopping six this season.

The Sabres signed Lekkas, who recently joined the Rochester Americans, to a professional tryout Monday because Ullmark, Ukko-Pekka Luukkonen and Carter Hutton are hurt and Dustin Tokarski returned home to deal with a family emergency.

“As I got to Rochester, you kind of see what’s going on up here and I was extremely fortunate to get the call-up here,” said Lekkas, who has played seven games for the Amerks. “Just with all the uncertainty and having to carry so many goalies at this level, you never really know. It’s been a ride this year and I’m just enjoying it all.”

Lekkas said Amerks coach Seth Appert told him after Monday’s morning skate in Rochester he was needed in Buffalo. He said he quickly dried his equipment, grabbed some belongings and arrived in Buffalo at 3:30 p.m.

Like many minor league players, the 6-foot, 181-pound Lekkas has experienced a whirlwind year. He started his rookie season in Fort Wayne, compiling a 7-2-2 record with a 2.15 goals-against average and a .914 save percentage in 11 outings.

His play in the ECHL earned him a PTO from the Amerks in March.

“It’s been pretty crazy,” Lekkas said. “I think I spent a lot of the year just training and waiting for the season to start, and then I finally got things going in Fort Wayne and I had a lot of success there.”

Lekkas made 3,913 saves over his four-year career at Vermont, the most in Hockey East history and the fifth-most in NCAA history.

Houser, 28, said he was born with a form of clubfoot, a condition in which “the tissues connecting the muscles to the bone are shorter than usual,” according to the Mayo Clinic. He underwent 11 surgeries before he was 2 and two more when he was 11, according to to the South Florida Sun Sentinel.

“I don’t think about it too much, to be honest … it’s never really hindered me at all,” Houser said Monday. “I’ve been able to perform, perform at a high level at various times. It’s kept me going, for sure, it’s made me work I think a little bit harder knowing that I have to keep up, that I’m not as naturally, I guess, gifted as some others in terms of maybe footwork or height. …

“In the summer … I have to work that much harder on my footwork and my speed.”

The Sabres made one lineup change Tuesday, inserting defenseman Colin Miller for Will Borgen, who rested for maintenance.

The Sabres on Tuesday recalled forward Brett Murray from Rochester to the taxi squad.