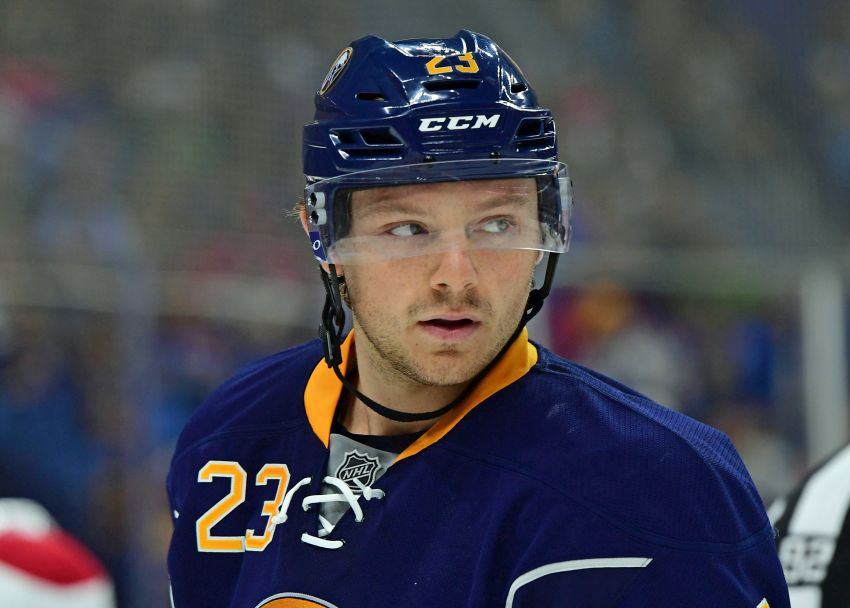 BUFFALO – It was only a matter of time before Sam Reinhart switched positions.

Reinhart, however, produced only two assists in four games. The 1-2-1 Sabres, meanwhile, have just 11 goals as a team, six of them in one outing.

So Bylsma has moved Reinhart back to center, his natural position, for tonight’s tilt against the Philadelphia Flyers, the finale of a four-game road trip. Bylsma said when Eichel was hurt Oct. 12, he anticipated he would eventually switch Reinhart.

“I think we’re looking for Sam to anchor a line and be that guy in the middle,” Bylsma said Monday inside KeyBank Center.

Bylsma also wants Reinhart to showcase more speed. Playing with wingers Tyler Ennis and Zemgus Girgensons should get him moving.

“I think when I’m playing my best, I’m moving my feet, I’m taking my time and space on the forecheck,” Reinhart said.

Through two days of practice together, Bylsma said he has liked the trio’s “jump” and “offensive punch.” So far, only Girgensons has scored a goal this season.

“Sam was a great skater … with those two guys on his line and having that speed with him,” said Bylsma, who watched Team Canada up close as an analyst.

The Sabres, of course, drafted Reinhart as a center second overall in 2014. But with Eichel and O’Reilly entrenched as the top two pivots, Bylsma switched Reinhart to right wing last season so he could play on the first or second line.

“I’m comfortable moving back and forth,” Reinhart said.

Reinhart thrived as a rookie, scoring 23 goals and 42 points in 79 games. Other than a brief run in the middle, he stayed on the side.

“I think it’s hard to say,” Bylsma said. “I think long term, I like seeing him play with Jack Eichel or Ryan O’Reilly, and that means he’s playing wing. He’s a centerman by nature, but I kind of like what I’ve seen from pairing him and Jack on a line.”

Reinhart shares strong chemistry with Eichel, his close friend and roommate. Bylsma was set to reunite the two with winger Evander Kane before Eichel’s injury scuttled that plan. Late last season, the trio morphed into the Sabres’ No. 1 scoring line. A day after Eichel went down, Kane cracked three ribs opening night and is out weeks.

“When Jack comes back, I’m hoping we’ll be put back together,” Reinhart said. “At this point, I like where our group’s at.”

Ennis, who suffered a season-ending concussion Dec. 30, hasn’t scored since Oct. 27, an 18-game drought. The Sabres’ longest-tenured player is a notoriously slow starter.

“I’m just trying to find my game, how it was before the injury,” Ennis said.

How is he trying to find his game?

“Just put the puck in the net,” Ennis said.

Before practice started Monday, goalie coach Andrew Allen, 40, was on the ice in full gear putting a few players through some paces, a sign one of the Sabres’ regulars was unavailable.

It turns out No. 1 goalie Robin Lehner is sick and unavailable for tonight’s tilt, Bylsma said.

“Hoping he would pull through this morning,” Bylsma said.

Bylsma said backup Anders Nilsson will start his first game for the Sabres, who acquired him from the St. Louis Blues on July 2 for a draft pick.

They also recalled goalie Linus Ullmark from the Rochester Americans. In four games, Ullmark is 3-1 with a 2.75 goals-against average and a .926 save percentage. He stopped 72 of 75 shots in the AHL club’s two weekend wins.

But before the Sabres summoned the Swede, Allen, who retired in 2005, practiced fully in leftover equipment from past Sabres goalies.

Nilsson enjoyed a strong preseason, posting a shutout. Tonight will be the Swede’s 53rd NHL appearance and first since April 9.