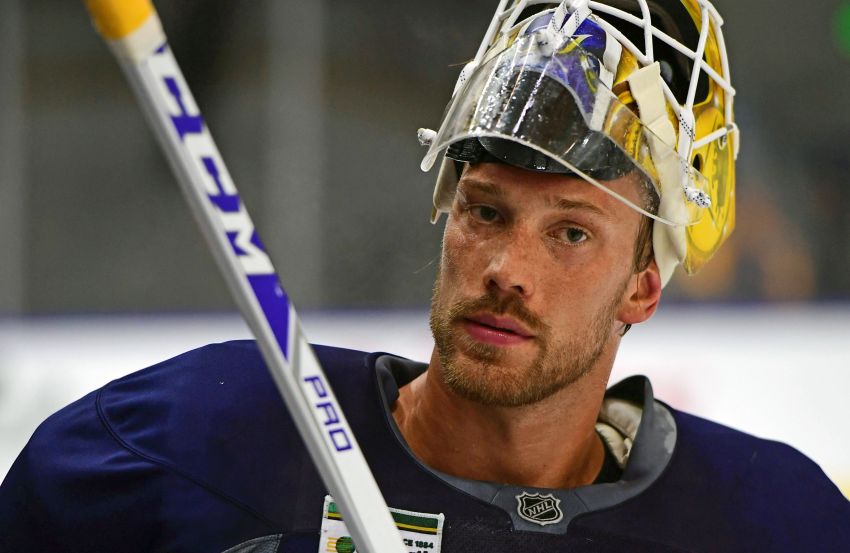 The decision, of course, made Nilsson’s NHL future iffy. But after 23 appearances with the New York Islanders, the Swede said he felt “ready for the next step.” He wanted to develop at a high level, something a fourth straight season in the minors wouldn’t offer him.

“You know, it’s always a risk,” Nilsson, who was acquired July 2, said Friday after training camp opened inside HarborCenter. “But I felt … I was kind of going in the same footsteps. I felt I needed an environment to continue my development, so I felt it was the right way to go for me.”

All along, Nilsson wanted another crack at the NHL.

“My goal before I went to Russia was to come back to North America,” he said. “That was always in the back of my head. I was fortunate to do that.”

Nilsson’s strong play in 2014-15 caught Edmonton’s eye last year. He played 26 games before the Oilers traded him to the St. Louis Blues, who needed a third goalie for insurance.

After a backup goalie, believed to be Jeff Zatkoff, reneged on a verbal agreement hours into free agency, Sabres general manager Tim Murray dealt a 2017 fifth-round pick for the 6-foot-5, 229-pound Nilsson.

“It’s tough to look at him and not see the size of him,” Sabres coach Dan Bylsma said. “To play big … that’s got to be the strength of his game. He’s such a big body.”

Ideally, the Sabres would like Nilsson to play about 20 games behind No. 1 goalie Robin Lehner.

“I’m trying not to think about it that much,” Nilsson said of his playing time. “I know Robin is a really, really good goalie. It’s going to be a competition between him and me.”

Interestingly, the top three goalies in the organization – Lehner, Nilsson and Linus Ullmark – are all Swedish. Nilsson has played with both on national teams.

“They’re both great guys and really good goalies,” said Nilsson, who has a “really good first impression” of the Sabres.

Nilsson handled the bulk of the Oilers’ goaltending duties for the first three months last season. He lost playing time and became expendable when he began slumping and Cam Talbot emerged.

“It’s a lesson, and I learned a lot from last season,” said Nilsson, who has a one-year, $1 million contract.

“Coming into the season I have a lot more experience than I had at this time last year,” he said.

The Sabres open their seven-game preseason schedule tonight against the Minnesota Wild at Pegula Ice Arena on the Campus of Penn State University. A $90 million donation from Sabres owner Terry Pegula helped fund the 6,014-seat facility.