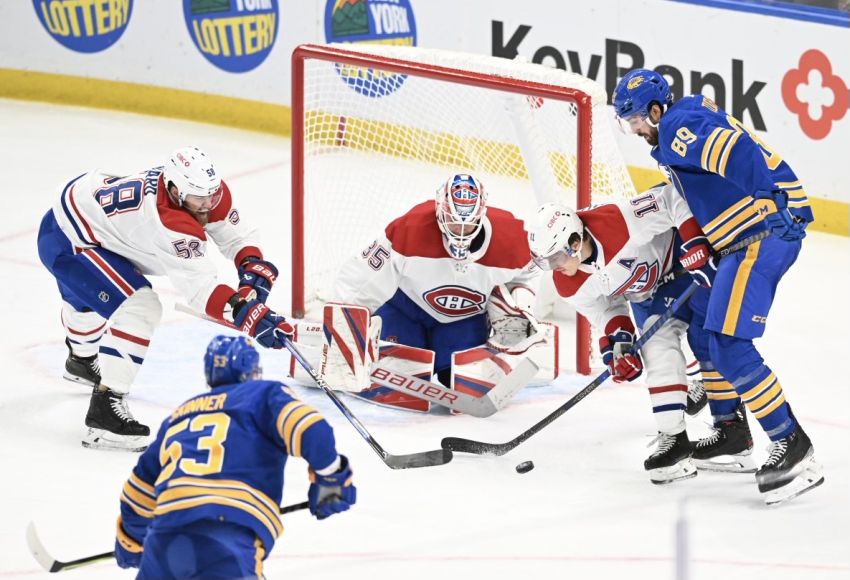 BUFFALO – The Sabres, one of the NHL’s early-season darlings, are suddenly on a two-game skid, having lost to two lightweights.

Then in a three-day span, they dropped games to the Seattle Kraken and Montreal Canadiens. Yikes.

At least the Sabres improved in Thursday’s 3-2 loss to the Canadiens before a bipartisan crowd 12,735 fans at KeyBank Center. After losing 5-1 in Seattle, they outplayed their Atlantic Division rival most of the game, registering a season-high 45 shots, including 18 in the third period.

When center Dylan Cozens scored 12:54 into the third period, it appeared the Sabres might at least eke out a point.

But seconds after Sabres goalie Eric Comrie’s sprawling point-blank save on Josh Anderson, the Montreal winger one-timed a shot from above the left circle for the go-ahead goal at 16:14.

Cozens said: “We score to tie it up with not that much time left, we need to keep coming out harder and keep pushing for that next one.”

If the Sabres keep playing like they did Thursday, they will likely earn more wins. Despite flying back from Seattle on Wednesday, they possessed a high energy level and generated offense

They couldn’t, however, finish their opportunities.

In the second, for example, they spent most of the period in the Canadiens’ zone, outshooting them 12-3 at one point.

“Second period was our big, big opportunity,” Sabres coach Don Granato said. “I think there we complicated some things. We could have been a little bit more intense going to the net, maybe scored a goal. I think we tried to pass the puck into the net. Feeling good about puck movement of possession time and didn’t have the killer instinct that we needed at that point. And it caught up with us.”

Cozens said: “We got lot of shots but we need more bodies around the net to get those rebounds and get those greasy goals. Not every goal’s going to be pretty.”

On Cozens’ goal from the left circle, linemate Victor Olofsson was in front of Montreal goalie Samuel Montembeault wreaking havoc.

“I don’t think that goal’s going in if there’s not a screen in front,” said Cozens, who has scored three times in the last four games.

They also won’t go in if you don’t shoot it. The Sabres might’ve cracked the 50-shot mark if they didn’t pass up so many chances.

“They blocked some shots in some high-dangers areas,” said Sabres winger Jeff Skinner, whose power-play score 31 seconds into the second period, his first goal this season, tied the game. “I think when you see that, that’s why guys are trying to pass up shots, they don’t want to get it blocked or they don’t feel like they have the shot.”

Brendan Gallagher opened the scoring 13:31 into the game, earning credit for the goal after Comrie stopped his shot and the rebound deflected in off Sabres rookie defenseman Owen Power’s skate.

Kaiden Guhle scored Montreal’s other goal in the second period, his first in the NHL.

Power, who moved beside Rasmus Dahlin on the top pairing with two regulars injured, endured a tough night.

“He made an incredible play at the end to set Dahlin up for an opportunity to tie the game with just a few seconds left, and that’s the high-level skill that he has,” Granato said. “But he had a few challenging moments tonight, as did many other guys on our team. So it’s – you hate to say he had them because of his age or he had them because of lack of experience. He had some challenging moments. … He’ll grow from it. He’ll get better.”