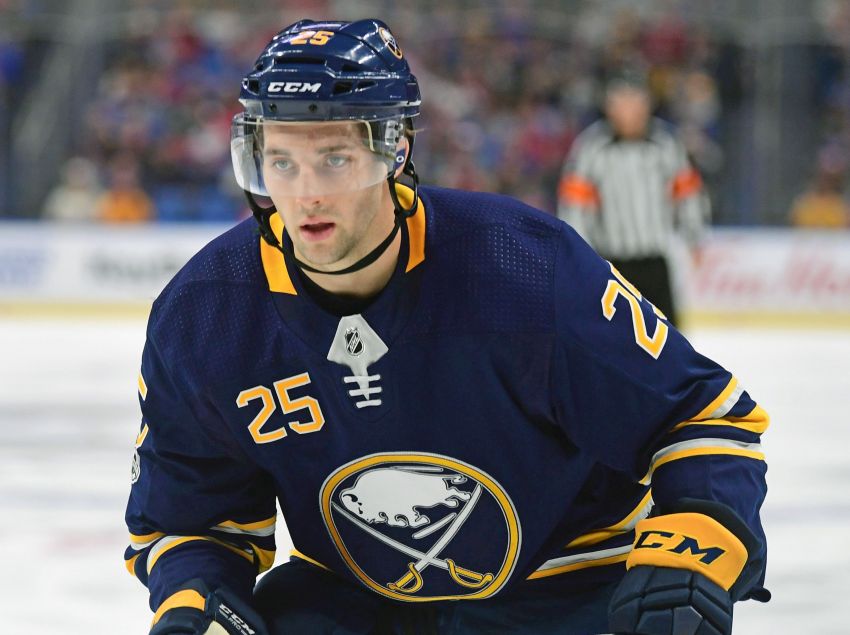 BUFFALO – Up top in the press box, with a view of the entire ice surface, hockey can look pretty simple.

“It’s obviously a lot easier watching games than it is being on the ice,” said Sabres winger Seth Griffith, a healthy scratch the last two games. “You see stuff that you wouldn’t normally see necessarily on the ice.”

Thanks to a glut of injuries, Griffith, the team’s biggest surprise during training camp, should receive a fresh opportunity in Friday’s tilt against Vancouver.

So far, Griffith, a dynamic AHL scorer, has one assist in five appearances. Perhaps taking a step back and watching games from a different perspective can help buoy him.

“When you’re up top, you can see the plays develop, you can see the speed, you can see how much time you really have and how much poise you can have,” Sabres coach Phil Housley said this afternoon inside KeyBank Center. “I think it gives you a different look, and then you can see and try to translate that in my game. ‘Hey, I got more time with the puck than I really do.’”

The Sabres, of course, expect Griffith, whose AHL scoring prowess hasn’t translated to the NHL, to produce offense.

“I feel like I was playing pretty well,” said Griffith, who has six goals and 17 points in 63 NHL games. “I had some chances I should’ve beared down on. … I’m just trying not to think too much about it.”

Griffith, who practiced at right wing with center Sam Reinhart and Benoit Pouliot this morning inside HarborCenter, will likely play because the Sabres returned from their four-game road trip with a long list of injuries.

“There’s a lot of guys that got banged up on this road trip,” Housley said.

The injuries, according to Housley:

– Center Jacob Josefson is week-to-week with a lower-body injury. Josefson is wearing a walking boot on his right foot after leaving Sunday’s 3-1 road win in Anaheim.

– Forward Zemgus Girgensons is day-to-day after blocking a shot in Monday’s 5-4 overtime loss in Vegas.

– Defenseman Josh Gorges is day-to-day with a lower-body injury.

Update: The Sabres have recalled defenseman Taylor Fedun from the Rochester Americans.

Vinz dressed as an emergency backup for a game in 2013-14 after the Sabres traded goalie Ryan Miller.

Housley also said defensemen Zach Bogosian (lower body) and Justin Falk (undisclosed) are week-to-week. Both were injured before the season. Housley had been saying Bogosian, who was hurt Sept. 29, was day-to-day.

Toronto selected Percy in the first round, 25th overall, in 2011. The 6-foot-1, 193-pound Percy played 12 games with the Maple Leafs, compiling three assists.