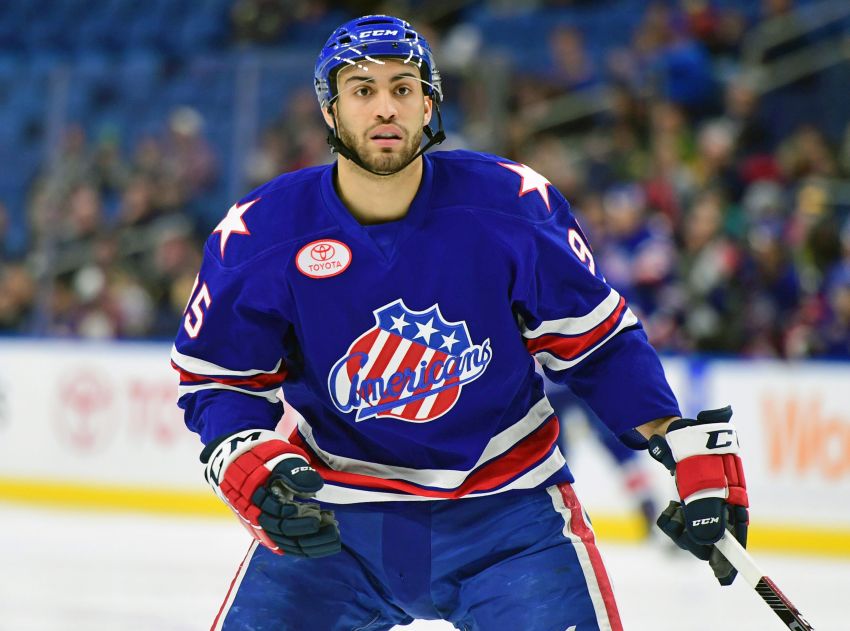 “It’s not as easy as people think, even as I think,” Bailey said Friday following the Rochester Americans’ 2-0 loss to the Utica Comets. “Hitting’s difficult to do.”

Bailey, 22, said he has learned thumping opponents – “Making sure that you’re not killing a guy from behind,” he used as an example – is an art.

“I know they want that up there,” he said of hitting.

Up there, of course, is Buffalo. Bailey has already played 40 NHL games, including 32 last season. This season, his third as a pro, was supposed to be the year the speedy winger finally cracked the Sabres out of training camp.

“I thought I was very, very close,” said Bailey, who was assigned to the Amerks again Sept. 30.

He added: “I know more than anybody how difficult it is going up and down, up and down all the time.”

Bailey said Sabres general manager Jason Botterill and coach Phil Housley gave him a “very positive” message as he left, telling him they “loved” his camp.

“But they want me to come down here and dominate, work on those little things, clean those up, so that when I come up there, then hopefully I don’t come back down,” Bailey said.

Bailey has dominated the AHL at times, occasionally morphing into perhaps the league’s most lethal scorer.

The Williamsville native scored two goals in the Amerks’ season-opening 3-1 win Oct. 6. Overall, he has compiled 45 goals in 125 AHL appearances.

That slick scoring, however, hasn’t translated to the NHL, where Bailey has scored just twice.

So Bailey, a second-round pick in 2013, has been trying to evolve and adapt his game for a different style. His future in the NHL might be as a third- or fourth-liner, a role the Sabres cast him in throughout the preseason.

“I felt like I added a couple tools, penalty kill and trying to play that fourth-line, third-line role where I bring energy, bring speed,” Bailey said. “The small details, sounds a little cliché, but making sure that every single shift, when it’s not top six up there, that I’m doing the little things that guys on the third and fourth line do.”

To thrive as a checker, Bailey must utilize his big frame and showcase physicality.

“It’s something I’m trying to do down here,” he said.

That was evident Friday as Bailey was the Amerks’ most physical presence inside the Blue Cross War Memorial, consistently bumping some Comets.

If Bailey keeps playing that style, he could earn another recall to the Sabres.

“There is still time, I’m still on that first deal of mine,” said Bailey, who just started the final season of his three-year, entry-level contract. “So I can come down here and clean those little things up and try to do everything I can to get back up there and make it very difficult for them to send me back down.”