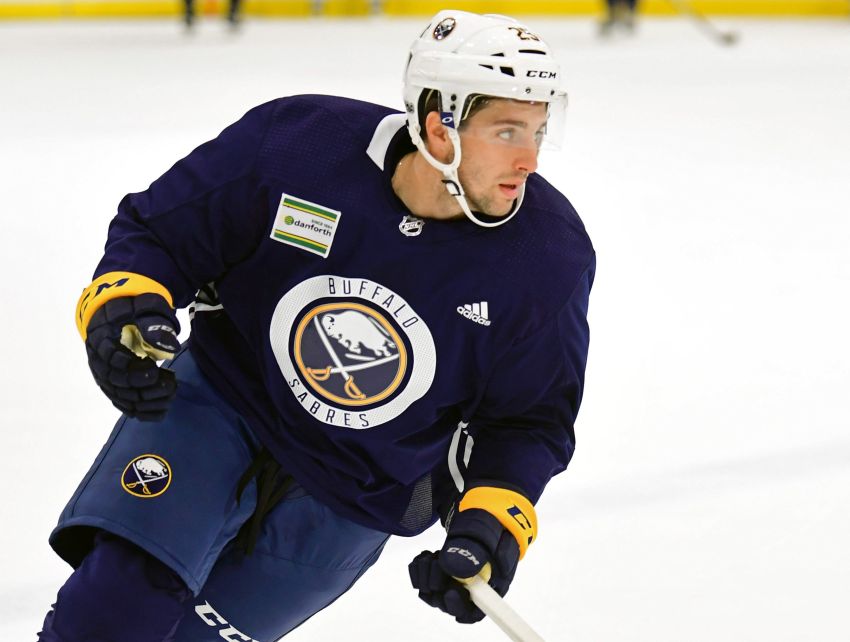 BUFFALO – A season ago, as Seth Griffith bounced around the Atlantic Division, getting waived and claimed three times in a three-month span, the Sabres winger lived a nomadic life out of a suitcase.

So after a long day at the rink or a road trip, Griffith couldn’t simply go home and unwind.

“That was probably the toughest part, just being in a hotel most of the year, not really having that space to call your own to just kind of get away and relax,” Griffith said Sunday following practice inside HarborCenter. “It’s tough with that hotel room every day. It gets a little frustrating.”

Much of the recent spotlight, understandably, has been on the Sabres’ wing prospects, most notably Justin Bailey, Nick Baptiste and Hudson Fasching, and if they can crack the team out of training camp.

But the Sabres, who open their preseason schedule tonight against the Carolina Hurricanes at KeyBank Center, don’t possess a ton of forward depth. Through three days of training camp, coach Phil Housley has been adamant everyone will get an opportunity.

So the 5-foot-9, 191-pound Griffith, 24, isn’t simply an AHL signing for the Rochester Americans. A strong preseason could earn him a roster spot. When the Sabres signed Griffith on July 1, general manager Jason Botterill mentioned be could be in the NHL.

“I’ve proven my worth in the American Hockey League,” said Griffith, who inked a one-year, one-way contract worth $650,000. “It’s time that I prove myself at the next level. Hopefully, I get that opportunity.”

Having compiled 34 goals and 121 points in his last 95 AHL games, Griffith might be the league’s most dynamic player. That skill, however, hasn’t translated to the NHL.

Still, Griffith’s slick talents are enticing, so teams kept grabbing him last season, his fourth as a pro.

Griffith’s whirlwind started Oct. 11, when the Toronto Maple Leafs claimed him from the Boston Bruins. Following three NHL appearances, the Florida Panthers nabbed him Nov. 12. The Panthers played him 21 times, then cut ties.

The Leafs claimed Griffith again Jan. 20 and assigned him to their AHL affiliate, the Toronto Marlies, for the rest of the season.

“Teams want you, but at the same time, you must not have been doing something quite right if you’re bouncing (from) team to team, right?” he said.

In 24 NHL games last season, Griffith mustered only five assists. In 38 contests with the Marlies, he scored 10 goals and 44 points.

Griffith understands to some he has developed the dreaded “AAAA” label, meaning he’s too talented for the AHL but not quite good enough for the NHL.

“I know I’m capable of playing in the NHL,” he said. “No matter what anyone says, I’m just going to focus on what I need to do, let the rest take care of itself.”

So what can make Griffith stand out this preseason?

“The system will make him successful, and that’s just not … offensively, but defensively,” he said. “He’s made some really good adjustments so far … and we’re going to have to continue to pound away on our message as far as five-on-five play goes.”

As tough as last season quickly became for Griffith, he believes it changed him for the better.

“As a young guy, you don’t appreciate, I don’t necessarily think, the value of coming to the rink and playing hockey every day,” he said. “So I think you just learn to appreciate it a little more.”

Notes: Sabres defenseman Marco Scandella, who underwent offseason hip surgery, missed Sunday’s practice. “He hasn’t had a full summer of training, so we’re really being cautious with it,” Housley said. … Housley said new assistants Chris Hajt and Davis Payne will be behind the bench with him. Hajt will run the defense. … Housley shared no information on tonight’s lineup.