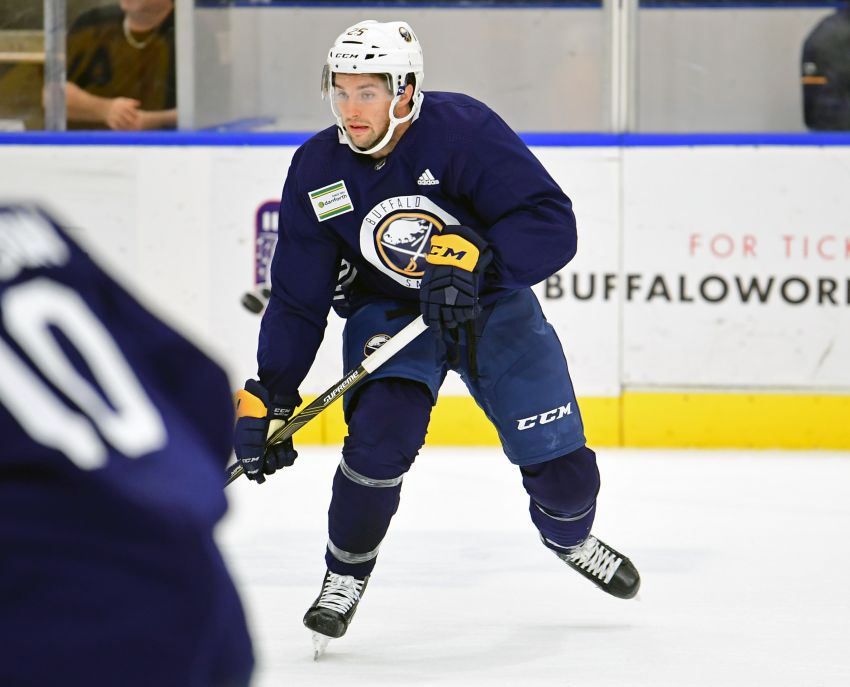 BUFFALO – Among the 38 players the Sabres have used through five preseason games, very few have stood out.

But those Sabres are expected to make notable contributions. What about the bubble players, the AHL guy looking to crack the big club out of training camp?

Up front, winger Seth Griffith, 24, has been perhaps the Sabres’ biggest surprise, making a strong push to remain on the roster for Thursday’s season opener.

After compiling a goal and two points in the first three preseason games, Griffith will play in tonight’s finale against the New York Islanders inside KeyBank Center.

Twelve forward spots are likely set, leaving just one or two open. Griffith, a lethal AHL scorer who has struggled to produce in the NHL, could secure his place with another strong outing tonight. Eighteen forwards are left in camp.

“Coming into a new camp, new system, new coaches, kind of a fresh start for me,” Griffith said this morning. “I was really looking forward to it. I played three games right off the bat. It felt good the first game, I just kind of kept it going.”

The 5-foot-9, 192-pound Griffith, who played with three NHL teams last season (read about his crazy season here), will skate on the right wing with center Sam Reinhart and Matt Moulson tonight.

Why has Griffith thrived this camp?

Here are the rest of tonight’s likely forward lines and defense pairs from left to right:

Goalie Robin Lehner will start and be backed up by Chad Johnson.

In other news, Sabres defenseman Marco Scandella, who has been resting his hip at times during camp and sitting out games, will be scratched tonight. Scandella, an offseason acquisition from the Minnesota Wild, underwent hip surgery in May.

Since Scandella will miss all six preseason games, his Sabres debut will likely come in Thursday’s opener.

While Scandella could’ve played tonight, Housley wanted to be cautious.

“He’s made great strides and great improvement with it every day,” Housley said. “We don’t want to put him into action too early where he has a setback.”