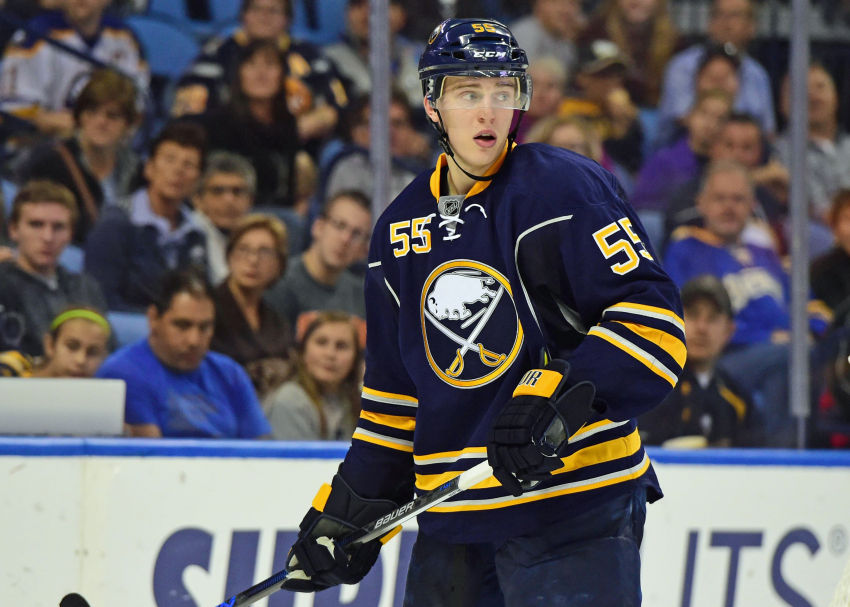 BUFFALO – Just a week ago, it appeared the Sabres would be forced to utilize a blue line by committee early on. Without a proven No. 1 defenseman to gobble up minutes, coach Dan Bylsma had to spread the ice time out evenly, right?

“(He’s) playing in all situations for us, playing against other teams’ best players in defensive situations, so it’s going to result in being out there for the 20-, 25-minute range probably,” Bylsma said Wednesday following practice inside HarborCenter.

The Finn ranks 10th in the NHL in ice time entering tonight’s road tilt against the Florida Panthers, averaging 24 minutes, 56 seconds a game.

“If it’s my choice, I would like to play 60 minutes,” Ristolainen joked. “I think it’s impossible.”

So far, Ristolainen’s three totals – 23:10, 26:41 and 24:58 – have topped the Sabres each game. Only one other defenseman, Josh Gorges, his current partner, is averaging more than 20 minutes a contest.

Ristolainen enjoyed a strong outing Monday afternoon, scoring a power-play goal and adding an assist in the Sabres’ 4-2 win against Columbus, his third effort of two or more points in his last 10 appearances dating back to last season.

“Being able to do what he can at his age is exceptional,” Gorges said. “His ability to continue to grow, to be what he can be in the future is a whole other thing. The future is bright for him.”

Ristolainen has been pegged for stardom since the Sabres selected him eighth overall in 2013, and he occasionally provided glimpses during his first two seasons, using his 6-foot-3, 207-pound frame and smooth skating to be an aggressive presence.

“I think he’s an exceptional talent,” Gorges said. “It’s hard to find guys that are big and strong and can play a physical game when you need to, but can skate, move pucks and be an offensive player. Whether it’s just moving pucks out of his zone or joining the attack and being an offensive threat, it makes him a dangerous hockey player.”

Not surprisingly, he accumulated some terrible statistics. With the emergence of advanced stats, plus-minus has taken a backseat to some other numbers. Nonetheless, the wretched minus-32 Ristolainen registered last season illustrates how much he struggled. Only one NHL player, Edmonton’s Nail Yakupov, had a lower rating.

“Always when you get some years under the belt, some experience, it’s good for you,” said Ristolainen, who missed the first part of training camp with an upper-body injury. “You kind of know what to (expect). I think we and I went through some tough times last year. When you are losing all the time it’s tough, so I think every time when you win you appreciate it more.”

Ristolainen kept playing through those tough times, skating more than 20 minutes in his final 20 appearances in 2014-15. Those minutes, no doubt, are helping him now.

“It’s early in the year … but details, little details in his game that he’s going to continue to get better, and when he starts to get all those little things down, he’s got it all,” he said.

Sabres captain Brian Gionta, out the first three games with a lower-body injury, practiced beside center Jack Eichel and Evander Kane on Wednesday. The winger is questionable for tonight.

Meanwhile, defenseman Zach Bogosian, out with a lower-body injury since the beginning of training camp, practiced for the first time Wednesday in a non-contact role. Bogosian is progressing and accompanied the team for its two-game Florida trip, Bylsma said.

In other news, defenseman Matt Donovan cleared waivers Wednesday and was assigned to the Rochester Americans.