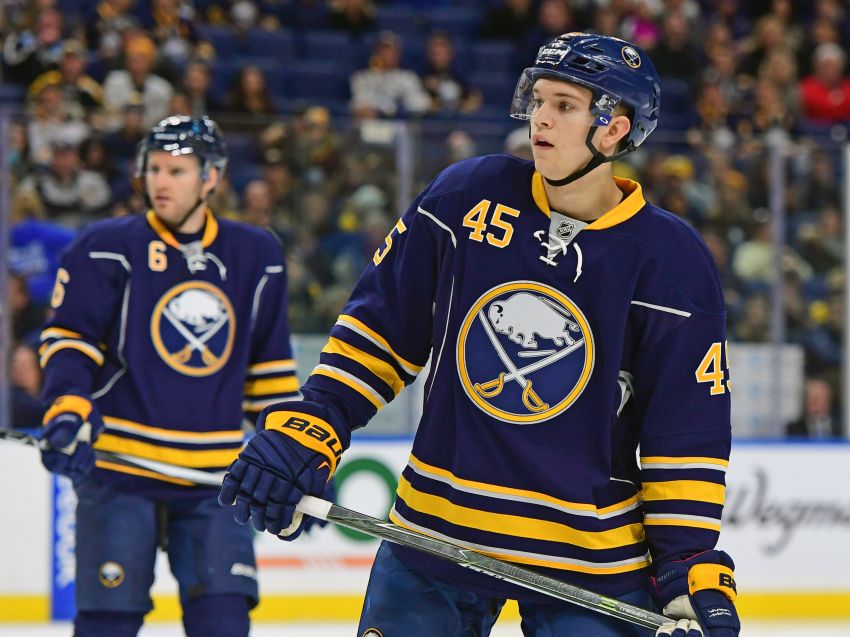 BUFFALO – Early in his NHL debut Saturday afternoon, Sabres rookie Brendan Guhle, like any youngster thrust into the spotlight, said he felt “a lot” of nerves.

Who could blame him? A day earlier, the defenseman was in British Columbia preparing for a junior Western Hockey League game.

On Saturday, after the Sabres made an emergency recall, they threw Guhle headfirst into the action, skating him 16 minutes, 20 seconds in their 2-1 loss to the Boston Bruins.

“First couple of shifts, I really was not sure what to expect,” Guhle, 19, said inside KeyBank Center. “It was a lot like preseason.”

Then, Guhle said, he settled down and realized, “Oh, I can play this.”

Guhle’s seven shot attempts led the Sabres and his four shots on goal tied for the team lead. The 2015 second-round pick showcased his strong skating, consistently moving into the rush. He was a plus-1 and appeared to earn his first NHL assist before captain Brian Gionta’s goal was called back because he kicked the puck.

“He certainly wasn’t shy about using his skating into the play,” Sabres coach Dan Bylsma said.

Guhle also defended well, racing back to poke the puck away from David Krejci as the Bruins center zoomed down the left wing in the third period.

Other than a some early communication problems in the defensive zone, Guhle’s play impressed Bylsma.

“He felt real comfortable stepping in and playing with those guys,” Bylsma said.

Skating with Franson “made it super easy,” Guhle said.

“He was talking to me all game and making good plays and not putting me in bad spots with the puck,” he said.

“He was moving around like he would be in juniors, it felt like,” he said. “Coming into D-zone situations, he was comfortable, he was talking. You can’t ask for more than that for a kid coming out of juniors.”

How long will Guhle stick around? The Sabres have nine games before the first year of his entry-level contract kicks in.

The Sabres recalled Guhle because Josh Gorges blocked a shot in Thursday’s 4-3 win against the New York Rangers.

Gorges’ injury means three regular defensemen – Zach Bogosian (knee) and Dmitry Kulikov (back) – are sidelined. Bylsma said he wanted to talk to the doctor before he gave an update on Gorges.

Guhle never expected to be in the NHL this season. He was warming up with his Prince George Cougars teammates Friday when his coach gave him some unexpected news.

“Told me I was traded to the Sabres,” a smiling Guhle said prior to the game.

He wasn’t aware he could be recalled during the season. He arrived in Buffalo about 1:30 on Saturday morning.

Guhle impressed the Sabres so much early he earned a contract just weeks after the 2015 draft. He has also turned heads in the last two training camps, playing 10 preseason games.

“It’s just maturation for him and his game. We felt like we needed to add some speed on the back end, some skating ability.”

Bylsma said Kulikov has skated for the last seven days, the last two with physicality. The Russian could practice next week. Meanwhile, Bogosian is 10 days to two weeks away.

What about the injuries with the Rochester Americans?

Bylsma said defenseman Casey Nelson has missed two games with a neck/shoulder problem and is day-to-day. Winger Hudson Fasching hurt his groin again and could start skating next week.

Notes: With so many injuries, Sabres defenseman Rasmus Ristolainen skated 29 minutes, nine seconds. … Sabres winger Sam Reinhart, who assisted on Evander Kane’s goal, has a four-game point streak for the second time in his career.

Guhle again with the speed to get back & then broke up the play. pic.twitter.com/MQpbn8kxY5