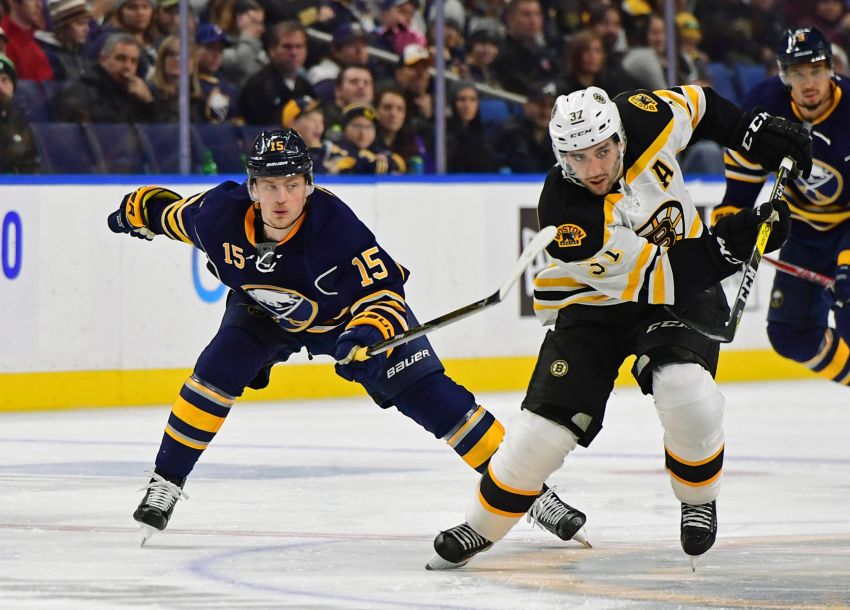 BUFFALO – Back to reality. Following two high-scoring, entertaining wins last week, the Sabres reverted back into their regular form Saturday afternoon, losing 2-1 to the Boston Bruins in a drab affair inside KeyBank Center.

Incredibly, it was the Sabres’ ninth 2-1 game this season. They’ve only played 24 times. It marked the 12th time they’ve scored one goal or less.

After three early shots, the Sabres went the final 15:16 of the first period without registering one.

“I liked our first five minutes of the game, and then it dropped off,” Sabres coach Dan Bylsma said. “We struggled getting out of the defensive, turned the puck over there and gave them momentum, gave them opportunities.”

“I was going through a slump,” said a relieved Kane, who has a three-game point streak.

“This is a goal you typically see from Evander, his shooting spot,” Bylsma said.

But Kane, who possessed a penchant for blasting the puck from anywhere a year ago, hasn’t shot it enough in his 13 appearances this season, Bylsma said.

“The one thing you keep working and Evander to do is shoot the puck,” Bylsma said. “He hasn’t shot the puck this year, I think, the way he does, and he’s had opportunities to do it.

Still, Kane has been more noticeable for the last two weeks.

“He’s started to get more of those opportunities to shoot the puck,” Bylsma said.

With Jack Eichel, Kane’s regular center, finally healthy, he might keep getting those opportunities.

The Sabres thought they had scored late in the second period, but officials reviewed the play and ruled captain Brian Gionta kicked rookie Brendan Guhle’s shot from the point past Bruins goalie Tuukka Rask.

“You start thinking, ‘How we going to get one by this guy?’” Bylsma said.

Patrice Bergeron made it 2-0 7:44 into the third period, racing to the other side of the net after the puck deflected off his arm and into the air.

In his third appearance this season, Eichel registered two shots in 19 minutes, 14 seconds of ice time before the capacity crowd of 19,070 fans, the Sabres first sellout since opening night.

Eichel’s seven-game point streak dating back to 2015-16 ended. He has three goals and four points this season.