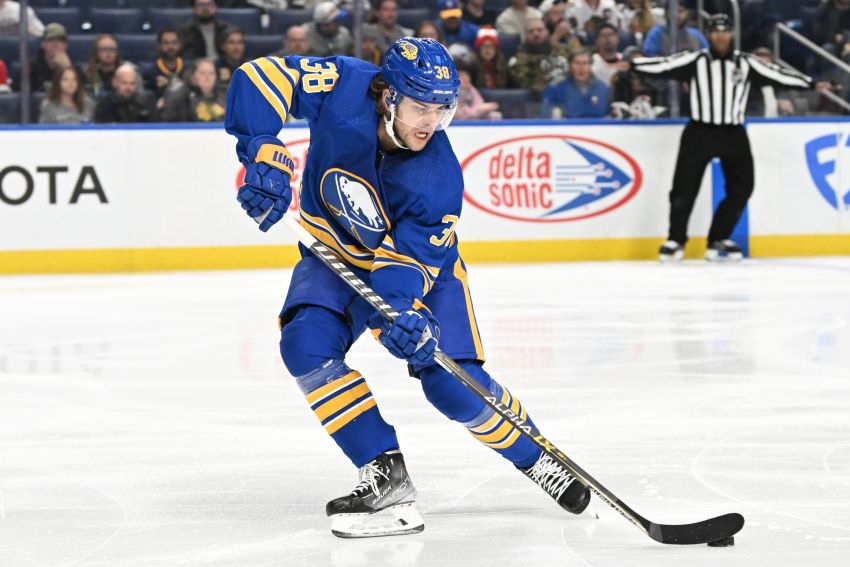 The Sabres, however, want to attack and push the pace. If players make mistakes, coach Don Granato and his staff can live with them.

“The system (here) allows me to be aggressive, whereas maybe some teams prior I’ve been a little bit more on my heels a little bit, based on that,” Clague said hours before Tuesday’s 4-1 loss to the Arizona Coyotes at KeyBank Center.

In his first weeks with the Sabres, Clague, 24, said he has developed a “mindset of being on my toes, being aggressive and trying to play as fearless as I can.”

That has helped him give the Sabres valuable minutes for the last six games as they wait for some injured defensemen to recover.

“This is a great opportunity,” said Clague, who spent last season with the Los Angeles Kings and Montreal Canadiens, playing a career-high 36 games. “It’s exactly what I want.”

When the Sabres beefed up their depth by signing Clague to a one-year, two-way contract on July 13, it seemed likely he would start the season in AHL and serve as a top recall option. After just five games with the Rochester Americans, the Sabres summoned him after losing defensemen Henri Jokiharju and Mattias Samuelsson.

The 6-foot, 190-pound Clague has played almost exclusively beside rookie Owen Power, looking more comfortable each game. Early in Tuesday’s contest, however, they got their wires crossed behind the Buffalo net, and Lawson Crouse scored an easy goal at the 23-second mark.

In Saturday’s 5-3 road loss to the Tampa Bay Lightning, Clague skated a season-high 21 minutes, 14 seconds. Granato said it was his best outing.

“Kale has really made remarkable strides game by game in the last few games,” he said. “Each game and each day even in practice since he’s been up here. He left camp, we kept all the guys we signed this summer on defense longer so they can get more reps with us. Since he’s come back up, we’ve seen immense improvement but steady progress game to game sitting again with (coaches) Marty Wilford and Dan Girardi going over clip after clip.

Granato said Clague’s ability to adapt to the Sabres’ system has also been crucial in his acclimation.

“He went from a system last year that was man-on-man to way different reads, and that’s a challenge for anybody and everybody to switch that way,” he said. “But him, his ability to keep an open mind and adapt fast, a credit to him. He’s done really, really well to continue to focus on him adjusting and him making himself a better hockey player.”

“It was an accident after,” Dahlin of the upper-body injury that sidelined him. “I was hit kind of late. My neck was a little bit off. I don’t know, it was a mix of everything. So it wasn’t that situation.”

The Swede finished Friday’s 5-3 loss in Carolina, playing 26 minutes, 58 seconds and scoring a power-play goal with one second left in the third period. After the game, however, he said he “was kind of feeling a little bit off.”

So he decided to sit out against the Lightning.

“I took the sure before the unsure,” Dahlin said. “When it comes to the head, you got to be careful. So I’m all good now and I’m ready to go.”

Dahlin learned a lesson in Friday’s contest. Over the years, he has developed an edge, getting under opponents’ skin and drawing their ire.

Against the Hurricanes, he shot the puck after the whistle. That’s when Kotkaniemi came in.

“I made a stupid play,” Dahlin said. “I shot after the whistle. You’re not supposed to do that. So I’m blaming myself.”