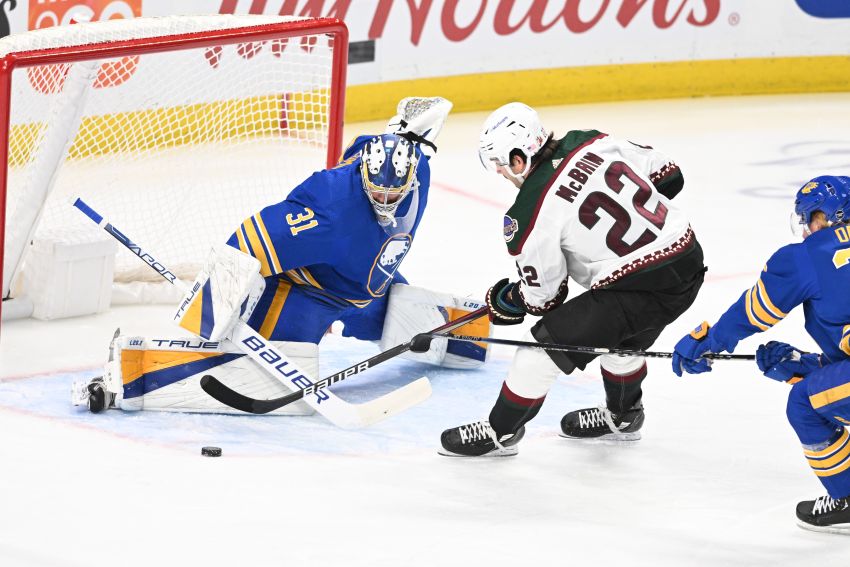 BUFFALO – Barely 20 seconds into Tuesday’s 4-1 loss to the Arizona Coyotes, Sabres defenseman Owen Power left the puck behind the net, and his partner, Kale Clague, overskated it, creating an easy goal for Lawson Crouse.

The gaffe turned out to be a harbinger for the Sabres, who looked disjointed and sluggish throughout the night, often drawing the ire of the announced crowd of 10,296 fans at KeyBank Center.

The Sabres’ third straight loss irked coach Don Granato so much he gave his thoughts on a weak effort before taking any questions from the media.

“I don’t care what the stats said at all,” said Granato, whose Sabres outshot the Coyotes 33-24. “I don’t know what the stats said. I thought … we felt we wanted an easier game. We didn’t do what it took to maybe create more chances or score the goals we needed from identifying how the game was, get to the net enough, get pucks to the net.

“At the end of it, you look at it, we had three goals and one off the foot. The first one starting off Owen off a reverse and the next two off of us into our own net. That’s an indication of us not being ready like we should’ve been.”

Following Monday’s practice, Granato noted how the Sabres did not look sharp, an ominous sign.

“Yesterday’s practice was not good,” he said. “It happens, but I do think our guys will look in the mirror on this one. It’s just frustrating in the moment and we got to take it to heart.”

A week ago, the Sabres won their third consecutive game, roaring out to a 7-3-0 start. Now, they’ve lost three straight contests in regulation for the first time April 7 to 10.

The Sabres’ schedule is only getting tougher. The Vegas Golden Knights visit Thursday and the Boston Bruins on Saturday. The teams are a combined 23-4-0 this season.

In dropping back-to-back games 5-3 to the Carolina Hurricanes and Tampa Bay Lightning on Friday and Saturday, the Sabres played two of the NHL’s heavyweights tough. Tuesday’s home loss to the Coyotes, a perennial lightweight, stings.

The Coyotes played the second contest of a 14-game road trip. As their new rink, Mullett Arena, is being finished, they’ll be away until Dec. 7.

The Sabres did tie the game, getting a power-play goal from center Tage Thompson 14:26 into the first period. But Matias Maccelli’s power-play score – his pass deflected off Sabres center Dylan Cozens’ skate in the slot – put the Coyotes up 2-1 17:30 into the game.

“Their first three goals went off of us, and don’t be fooled by us,” Granato said. “We didn’t play hard enough in the areas we need to play hard. We were too slow that we hit goalposts. Their goalie (Karel Vejmelka), I thought, played real well. But the bottom line is we could’ve won a game but we didn’t go attack a game like we needed to.

“We certainly could’ve won the game, but did we play the way we needed to play? No, we didn’t.”

Sabres winger Rasmus Asplund said: “You have to put pucks to the net. Just try to find ways and get screens and all that sort of stuff. I thought we had a lot of good chances today. They just didn’t end up in the back of the net.”

The game was delayed about 20 minutes because a Zamboni broke down while resurfacing the ice during the second intermission. The other Zamboni towed it off the ice before returning to finish the resurfacing.