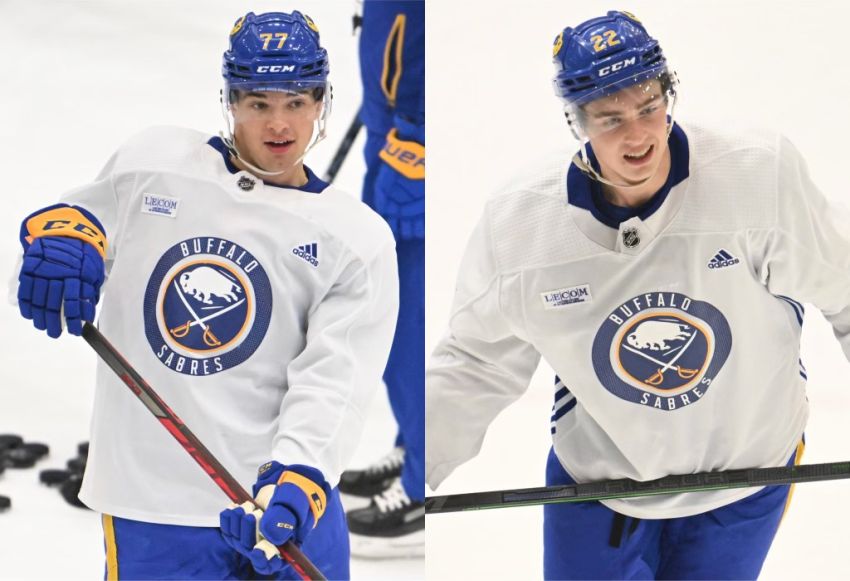 The Sabes are confident JJ Peterka (left) and Jack Quinn will keep developing in the NHL. ©2022, Micheline Veluvolu

BUFFALO – Sabres rookie JJ Peterka stood before the media in his sweat-soaked practice uniform, a smile etched on his face.

On Monday, general manager Kevyn Adams called Peterka, 20, and Jack Quinn, 21, and informed them they had earned a spot in the Sabres’ opening night lineup.

Two years ago, after drafting Quinn eighth overall, Adams moved up to take Peterka with the 34th pick after the German surprisingly fell out of the first round.

Adams, having used his first selections as GM on the high-scoring wingers, will always be tied closely to Quinn and Peterka.

Naturally, the past two years have been whirlwinds for the youngsters.

Peterka spent the 2020-21 season ravaged by COVID-19 playing at home and in Austria. Last year, he struggled early with the Rochester Americans, often looking like a raw prospect adjusting to North American hockey.

But he caught fire around Christmastime and, over the final five months, he developed into one of the AHL’s most dynamic talents, registering the most points (68) by a player in his under-20 season since 1975-76.

Quinn, meanwhile, had a brief taste of the minors in 2020-21 before developing into a lethal scorer with the Amerks last season and earning the league’s top rookie honors.

In Peterka and Quinn, both of whom played their first two NHL games last season, the Sabres had arguably the AHL’s two best forward prospects.

Now, they’ve cracked the NHL and are expected to play in Thursday’s season opener against the Ottawa Senators at KeyBank Center.

“I was just super, super happy,” an excited Peterka said following Tuesday’s practice of learning he had made the team. “I mean, that was the thing I was working for the whole summer. Yeah, to have made the team is just an unbelievable feeling for me.”

Peterka said he had an emotional FaceTime conversation with his parents following Adams’ call. Quinn also said he phoned his parents.

“Just a lot of excitement,” Quinn said of his reaction to Monday’s news.

Quinn clearly had a better training camp than Peterka, who acknowledged he was overthinking things at times.

“I’m kind of a player who if he’s not thinking, he’s playing at his best,” he said. “So, yeah, I think because like so much new stuff came I kind of like had to think it. But, yeah, I think as the preseason went on it went like better and better for me.”

Peterka and Quinn, of course, are still raw talents. The Sabres understand they’ll need time to adjust to the rigors of the NHL.

“We know their potential skill,” coach Don Granato said. “We know they’re a talent and they’re dedicated to improvement. If they weren’t, they wouldn’t be here because they need to improve. They need to get better, they need to acclimate to the size, strength, speed of NHL players.

“They’re behind right now and it’s going to take them a bit, but we know their talent base. And the things I mentioned, the characteristics, intelligence of them, they will acclimate. We just need to get them in there.”

That’s why the Sabres plan to throw them headfirst into the fray and put them in positions to succeed.

“It’s almost like you can’t learn to swim without getting wet, right?” Granato said. “So they need to jump in the pool and swim. And we’re going to provide them that opportunity. We feel we have surrounded them with great support by the players that returned. So instead of bringing in the veteran guy to fill those slots, we want to bring in the young guy to fill those slots.”

With an average age of 25, the Sabres are the NHL’s youngest team, according to capfriendly.com. Still, many of their 20-somethings have been around for years.

Fielding such a lineup filled with neophytes has its pros and cons. But Granato said his young players possess the right makeup to succeed.

“Just young is not good enough, but talent, we know we have young talent,” he said. “And we know we have young players that compete. Just think of Dylan Cozens and lots of young guys with that real feisty, competitive attitude. So the three elements together, I’m really excited about. What that means is we’ll develop more game by game, we’ll take more from a game. We can recover faster game to game.

“But … you do have the opportunity to get better faster than many other teams in the league. … There’s a lot of excitement for the season, but the realization is we’re actually younger than we were last year, which is less experience. And it’s gonna take us a little bit to gain that experience, but I’m happy with the makeup of our roster.”