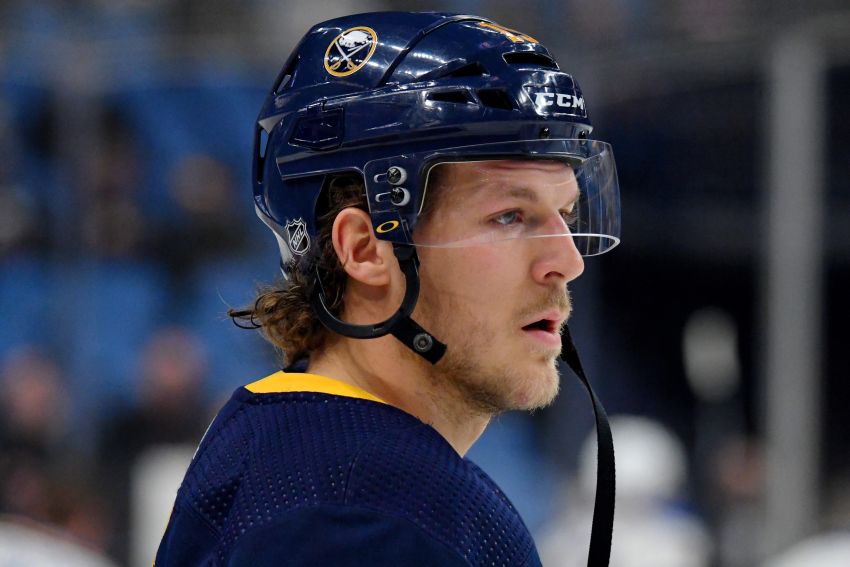 BUFFALO – Seven years ago, Sabres defenseman Jake McCabe had no idea he would be named captain of Team USA’s entry at the World Junior Championship.

The team, after all, had some returning players. McCabe, then 19, was participating in his first tournament.

“It was one I was surprised about because I was a first-year player,” McCabe said prior to Friday’s 3-0 loss to the Boston Bruins at KeyBank Center. “But I took it with great respect, there were a lot of great players on that team, a lot of great leaders, too.

“So I just went about my business the right way. I didn’t change who I was.”

Having captained the Americans to the gold medal in Russia, McCabe has a unique perspective into what Sabres defense prospect Mattias Samuelsson will experience at this year’s tournament in the Czech Republic.

Team USA named Samuelsson, 19, its captain earlier this week. The 6-foot-4 Samuelsson, a second-round pick in 2018, 32nd overall, is a sophomore a Western Michigan.

Samuelsson’s squad fell to Canada 6-4 in its opener Thursday.

McCabe, one of the Sabres’ alternate captains, said his advice to Samuelsson is simply “be yourself.”

“They give you a letter for a reason, it’s just because of the way you perform on and off the ice,” he said. “There should be nothing to change.

“If anything, it should elevate his play and give him more confidence. I know that’s what it did for me. I gave myself a lot more confidence in my play and I had a great tournament.”

Samuelsson is one of four Sabres prospects participating in the World Junior Championship. Center Dylan Cozens (Canada), forward Matej Pekar (Czech Republic) and goalie Erik Portillo (Sweden) are the others.

After skating with his teammates Friday morning, an upper-body bruise sidelined Sabres center Johan Larsson for the third straight game.

To replace him, the Sabres recalled center Curtis Lazar from the Rochester Americans on Friday afternoon.

Lazar moved into Larsson’s spot between Zemgus Girgensons and Kyle Okposo, who returned after illness kept him out of Monday’s 3-1 road loss to the Ottawa Senators.

These days, 30 is often considered “old.” Still, the Slovak is thriving in his 22nd NHL season.

In 2016, Krueger got an up-close look at Chara when he led Team Europe’s entry to the World Cup of Hockey final.

Krueger, who has spent most of his coaching career in Europe, said Chara’s intense year-round training habits made him a “pioneer.”

“He leaves a mark anywhere he is ever in an environment where teams are involved because of his attitude, first of all, always thinking about the team first,” he said. “But then how he leads with his fitness, his nutrition, his mindset. All of that whole package is just an amazing example for anybody to ever be around.

“I was honored to be around that for a month for the World Cup and be able to see that, because I had heard it lots of times from many coaches all over.”

He added: “He was doing all that (training) before it was trendy to do it, and that makes him special.”

Sabres winger Tage Thompson, out since suffering an upper-body injury in his season debut Nov. 17, is “still a ways away,” Krueger said.

“We’re happy to see him continuing in what’s a very difficult process for him,” he said. “But he’s still a long way away.”

Thompson, one of the Sabres’ top forward prospects, scored six goals and 12 points in 16 games with the Amerks earlier this season.