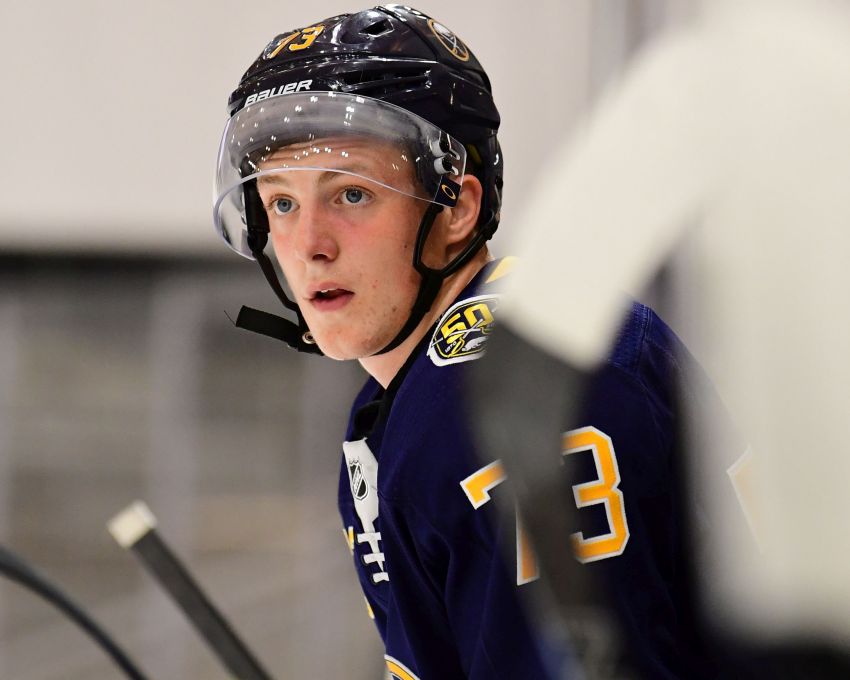 BUFFALO – Matej Pekar couldn’t stop smiling. After eight months anxiously waiting on the sideline, the Sabres prospect was just hours away from playing a game again.

“It definitely feels like forever,” Pekar said prior to Friday’s 6-4 win over the New Jersey Devils in the Prospects Challenge opener. “I haven’t played a game since January.”

Still, Pekar’s rookie campaign solidified his place among the Sabres’ top prospects. The forward’s mix of skill and grit often makes him the most electrifying player on the ice.

The 6-foot-1, 185-pound Czech loves thumping and agitating opponents, and he didn’t waste any time showcasing his regular aggressive style in the rookie tournament.

On Friday, Pekar was his usual tenacious self inside Harborcenter, hounding pucks, banging bodies and generally being a pest.

In the second period, Pekar hit Michael McLeod near the benches, got into a shoving match and nearly fought the Devils center.

Then early in the third, Pekar finally dropped the gloves, scrapping with Devils defenseman Michael Vukojevic.

The bout ignited the crowd and Buffalo’s bench.

“That’s unbelievable to see,” Sabres winger Victor Olofsson said. “He’s a pain in the (butt) for the other team. He’s a lot of fun to watch.”

“It’s his first game in a while,” Cozens said. “I know he wants to make an impression. He’s a scrappy guy, a tough guy.”

Pekar also spent about a month this summer working out in Buffalo, where he roomed with Cozens, the seventh overall pick in June.

The youngsters, who played on a line together Friday with Lukas Rousek, got to know each other well.

The Sabres annihilated the Devils early before a packed house, opening up a 6-0 lead.