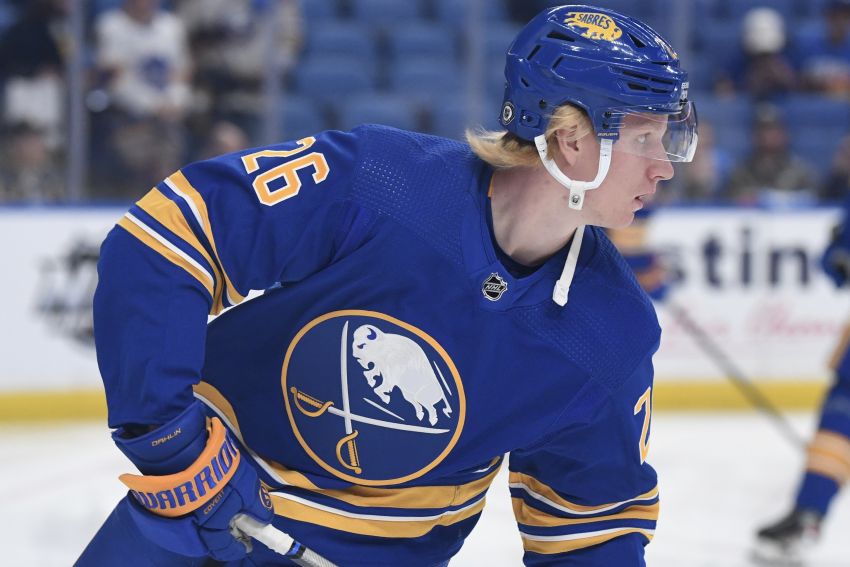 BUFFALO – Sabres coach Don Granato doesn’t see a large talent gap in the 20 players he dresses each game. A first-line forward or top-pair defenseman isn’t much better than a fourth-liner or third-pair defender.

“We don’t have any wide range in discrepancy in our player pool,” Granato said prior to Saturday afternoon’s 2-1 shootout win over the Arizona Coyotes at KeyBank Center.

So Granato utilized every skater throughout the first two games this season, rolling four lines and three defense pairs.

In Thursday’s 5-1 win over the Montreal Canadiens, everyone except center Casey Mittelstadt, who suffered an upper-body injury halfway through the contest, played at least 12 minutes, 20 seconds. Even with Mittelstadt absent and six power-play opportunities, Granato found time for everyone.

Only one player, defenseman Colin Miller, cracked the 20-minute mark.

Granato said a balanced attack is “a significant goal of ours.”

“I don’t believe it’s right to separate guys at this point,” he said. “I guess I look at my roster and I’m confident to spread ice time around. I think it’s a necessity. We need to play with a lot of energy. … They all have to play important situations.

Granato used 10 players, including eight forwards, for at least one shift during Saturday’s three-on-three overtime. For years, only former captain Jack Eichel and a few other forwards usually received shifts in overtime.

But on Saturday, Zemgus Girgensons, Kyle Okposo and Jeff Skinner – three wingers who have usually been spectators for the extra session – received shifts.

“We’re an evolving team,” Granato said. “I cannot find it in my being right now to say, ‘This guy’s better than that guy.’ There’s just too much. The ceiling’s too high for too many guys. And I do not want to separate guys that this guy can’t play in this situation because you’re not good enough. I won’t believe that in our locker room. They’re all evolving players.

“Any philosophy will be based on personnel and in any realm,” he said. “In that one, we’re just learning our personnel. Craig didn’t play a lot games last year and we’ll read and react with that information as it comes. But if there was a hot– guy, it would make sense to stay with that hot guy … not break that rhythm.”

Tokarski said he rolled the confidence he generated while playing 13 games last season into the new year.

“Just (the) confidence level to show that I can show a stretch of games at a high level and not just a flash in a pan, that coaches and players can count on you when you’re in net is a big thing,” he said.

That empty-net goal was just his second point of his miserable season.

This year, Eakin, 30, has already registered one goal and two points. He scored the Sabres’ lone goal Saturday in the second period.

Eakin said the Sabres’ up-tempo, aggressive style has buoyed him.

“You play this way as a team and … chances that weren’t there when you’re skating in sand, they’re opening up,” he said. “It allows you to be gritty and get to those areas.”

The Sabres, who host the Vancouver Canucks on Tuesday, had Sunday off.