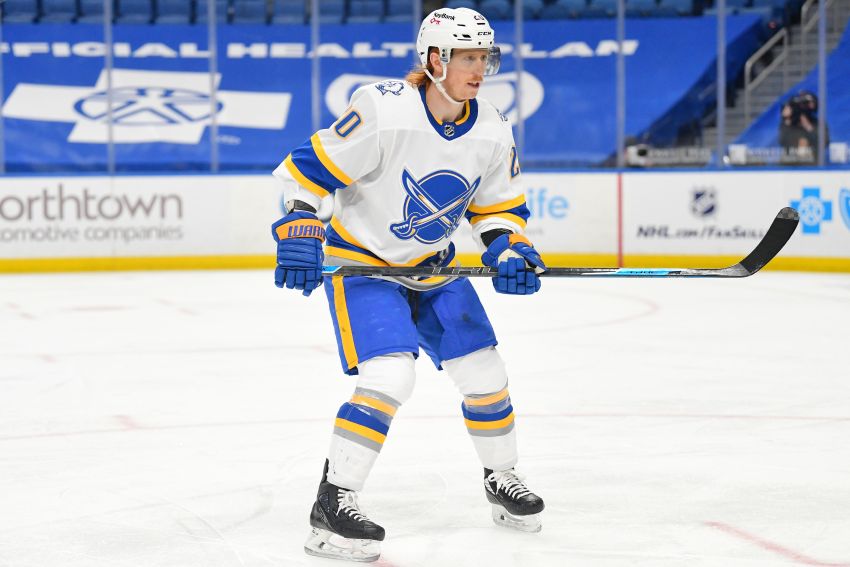 BUFFALO – Sabres center Cody Eakin, who has scored just one goal in 26 games this season, an empty-netter, will be a healthy scratch tonight against the Washington Capitals.

Rasmus Asplund, who hasn’t played since Feb. 25, will replace Eakin between Tobias Rieder and Kyle Okposo.

Eakin’s penalty-killing prowess has helped the Sabres improve from 30th last season to fifth this year. His 57.5 faceoff percentage ranks first among Sabres who have taken at least 100 draws.

But Eakin, who scored a career-high 22 goals in 2017-18, hasn’t produced much offense. Overall, he has compiled four points and a minus-7 rating this season.

“Certainly, his role with us is clear, that maybe not as much of late, but I would say through the first 20 games, multiple games, where he would be matched up against top lines of the other team, would’ve neutralized possibly some of his offensive risk and or attacking ability,” Sabres coach Ralph Krueger said on a Zoom call this morning. “But he has been a good penalty killer for us. He has been a good faceoff man for us. He’s a character player for us. …

“We will be speaking to him more about that type of (scoring) input. Moving forward, we do need depth scoring and he can be a very valuable source of that. So we’re looking at the different ways that we can bring into the game.”

Asplund has scored one goal in four NHL outings this season. The Swede also registered two assists in three games with the Rochester Americans. He has spent most of the year skating with the taxi squad.

“He left a good mark last time he was in and we need any percentage point of energy we can find and get right now,” said Krueger, whose Sabres play a road game Tuesday against the New Jersey Devils.

Asplund, 23, has tried to use the extra time to hone small details in his game. He mentioned he has focused on becoming stronger along the walls and keeping the puck longer.

“Usually you don’t get the opportunity during the season to really work on stuff,” he said. “Even when I play some games, we have a lot of video to watch, really get into what the small details are that are going make a difference in my game. So I’m just trying to enjoy it.”

In other lineup news, goalie Carter Hutton will face the Capitals inside KeyBank Center, marking the first time he has started consecutive games since Jan. 18-19.

The Sabres will make one change on defense, inserting Matt Irwin for Brandon Davidson. An upper-body injury will sideline center Dylan Cozens for the second straight game.

Capitals superstar Alex Ovechkin, who scored his 716th goal on Saturday, needs one more to tie Phil Esposito for the sixth-most in NHL history.

Update: The AHL announced today it has postponed Wednesday’s Rochester Americans home game against the Syracuse Crunch “out of an abundance of caution in accordance to league COVID-19 protocols.”

The Amerks have multiple positive COVID-19 cases, according to The Buffalo News.

COVID-19 problems have forced the league to postpone three Amerks games in the last week. No makeup date was announced for Wednesday’s contest.