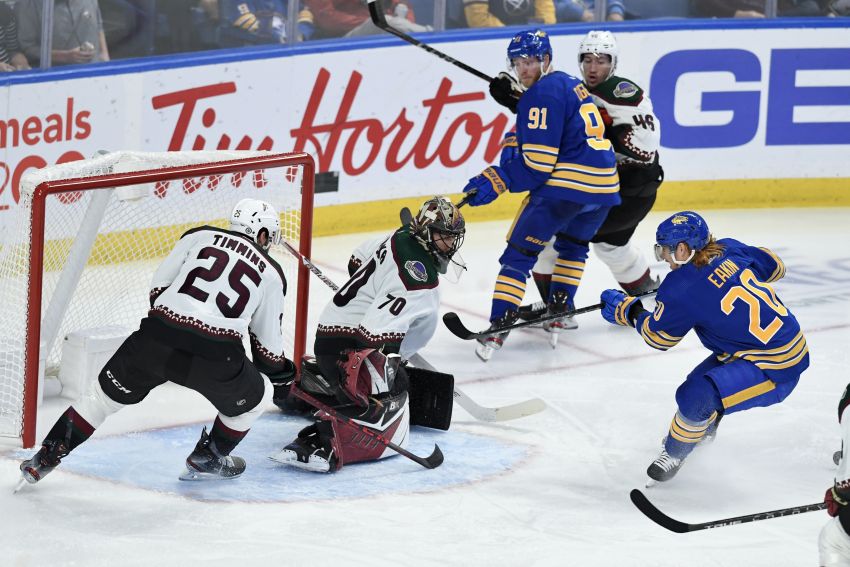 The identity the Sabres have started to establish within those games under coach Don Granato is the important part. So far, they’re playing an up-tempo, tenacious brand of hockey.

It proves those victories could be a harbinger.

“We are harder to play against,” Sabres center Cody Eakin said after scoring a power-play goal in Saturday afternoon’s 2-1 shootout win over the Arizona Coyotes. “We are always playing with speed on the forecheck, the backcheck, and it just kind of gets annoying, I think, to other teams.

“Not that there’s a big number of games that we’ve showed it, but consistently play like that, just playing as a team with speed, moving pucks up, funneling back, really just cutting off their rush to before it starts – we’re going to be hard to play against.”

The Sabres, of course, haven’t been hard to play against in recent years. They’ve often looked downright soft, rarely annoyed their opponents.

This new group, however, appears to be different. Most of the Sabres’ top talent was traded or left during the offseason. The roster is mostly comprised of 20-somethings looking to prove themselves. Many of the players are close friends off the ice.

“We do the job for each other and it’s easy to play,” Sabres defenseman Rasmus Dahlin said. “We’re a tougher team, but it doesn’t feel like we’re putting in that much effort because we’re playing together. It’s easy to play when it’s fun.”

It’s also easy to play in front supportive fans. While the crowds have been perhaps the smallest in franchise history – 7,872 watched Saturday – they’ve been loud.

Clearly, the fans – like in Thursday’s 5-1 win over the Montreal Canadiens, they broke into the “Shout Song” on Saturday – have buoyed the Sabres.

“It’s nice to start at home, it’s nice to have the crowd that we had engaged the way it was,” Granato said. “We had a lot of energy in the building. I thought our players fed off the energy and excitement in the building and that pushed us through with good momentum.”

The Sabres carried the momentum throughout Saturday’s game, pumping 33 shots on goalie Karel Vejmelka in his NHL debut, including 14 in the first period.

Still, the Sabres fell behind when Andrew Ladd scored 13:51 into the game. Eakin tied it 1:05 into the second period, capitalizing after winger Drake Caggiula zoomed to the net.

Sabres center Tage Thompson and Nick Schmaltz traded goals in the first round of the shootout before center Arttu Ruotsalainen’s third-round winner.

Then Sabres goalie Dustin Tokarski, who made 19 saves in his season debut, stopped Clayton Keller to secure the victory.

The Sabres have limited their opponents to two goals in their first two games for the first time since 2008-09.

Instead of breaking up his defense pairs, Granato put Butcher beside Dahlin, who usually plays beside Jokiharju.

Dahlin, a left-handed shot, has always skated on the left side. But he and Butcher, another lefty, both played on the right, their off side, against the Coyotes.

“If that side needed to be filled, they did it,” Granato said. “I’m sure (they had) a lot of confidence and they made a lot of nice plays. I was very happy with that. That’s a little bit of an unknown, obviously. That’s a big difference when you shift to the off side for a defenseman. I thought they did great today.”

While the second line of Thompson, Rasmus Asplund and Victor Olofsson did not score Saturday, the trio was dominant, generating a Corsi For – the percentage of shot attempts by the team while the line is on the ice five-on-five – of 100 percent.

The line generated 15 attempts and gave up zero, according to NaturalStatTrick.com.

Some of the chemistry can be traced to the season Asplund and Olofsson spent together as linemates with the Rochester Americans.

“They’ve had a long friendship and they just embrace it,” Granato said. “They have had time to feed off each other. And Tommer’s a nice complement to that. Obviously, he can hang onto pucks, extend possessions. They found a rhythm the first couple nights here.

“And Victor looked great to me, better than he did preseason at any point. I was concerned with him preseason. He was taking a little bit longer to get to his game. But the other night and tonight he really looked like himself.”

Olofsson played 21 minutes, 6 seconds Saturday, the most of any Sabres forward.