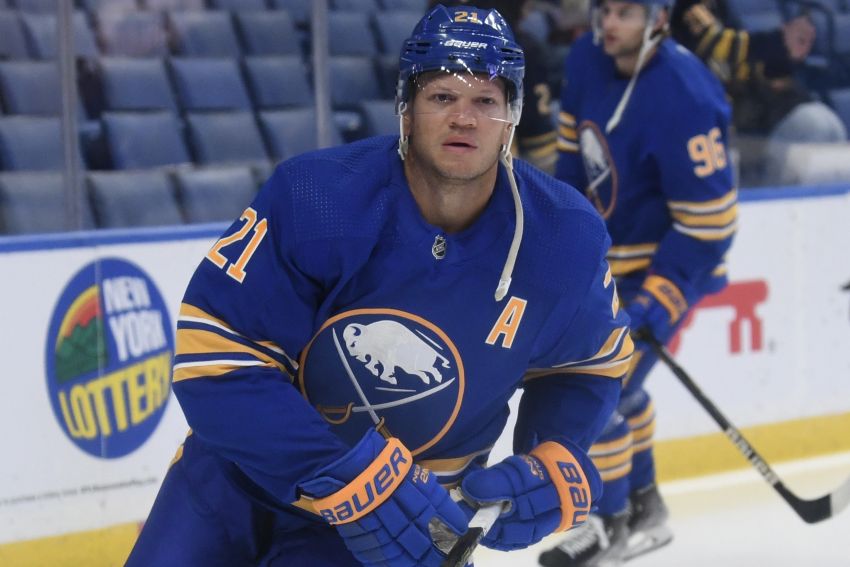 BUFFALO – During Thursday’s 90-minute practice, some Sabres raised their voices and told coach Don Granato to put away his whistle. They wanted to keep the drill going.

“You’re about to blow the whistle, and they want one more rep, one more rep,” Granato said inside KeyBank Center.

To Granato, his players’ enthusiasm two weeks into training camp reassures him he and his staff are giving them what they need and want.

This camp, the first under Granato, has been intense. Part of that can be attributed to Granato, who understands the Sabres must raise their standards after a decade of futility. Some of it can also be traced to the infusion of new players, many of whom are prospects or young journeymen who have often fought for roster spots.

“The guys that we have in there, they just love the game,” Sabres winger Kyle Okposo said. “Everybody just wants to play. We just had a practice out there and guys are saying, ‘No, let’s keep going, we want to keep going,’ and then everybody’s staying on the ice after. Guys just want to play hockey.

“That’s going to be pretty infectious for our room and for me as an older guy, it’s a lot of fun to see.”

Okposo smiled as he talked about Thursday’s session. At 33, he’s the Sabres’ second-oldest player behind goalie Craig Anderson, who’s 40.

For years, Okposo has been the Sabres’ most authentic voice, offering a blunt take through all the losing he has endured. On paper at least, this is the team’s weakest roster since he signed his seven-year, $42 million contract in 2016.

Still, Okposo sounds energized by what he has seen this camp. He understands many preseason prognosticators have picked to the Sabres to finish last again.

Okposo will likely serve as a third- or fourth-line checker again, a role he has embraced and grown into over the last two seasons. On Thursday, he practiced at right wing beside center Zemgus Girgensons and newcomer Axel Jonsson-Fjallby.

After being utilized in a top-six role for most of his career, Okposo realized he needed to adapt and make a difficult transition into less-glamorous job as he entered his 30s.

“Players, as their career evolves, they have to keep reinventing themselves because they’re losing the athleticism they had when they were 21, 22, 24 as you age,” Granato said. “He’s in that elite category of players who keeps finding a way to reinvent his game.

“And some players, it becomes a real challenge because they still try to do what they did five years ago, and it just causes a lot of trouble. … But Okie, he’s evolved his game and it’s working.”

Two years ago, Okposo established himself as one of the Sabres’ most reliable forwards. Last season, however, it took him months to find a groove.

Following the 10-month layoff for COVID-19, a lower-body injury he suffered late in camp sidelined him the first five games. He also dealt with an undisclosed ailment early in the season.

As a result, Okposo suffered through the worst start of his career.

“It was a very difficult year for me last year,” he said. “I didn’t start the way that I wanted to. I just couldn’t turn the engine on, it seemed like. A long time off without playing hockey and it took me a little bit longer to get going.”

Okposo mustered just one shot on goal in his first six games. He recorded only one point, an assist, in his first 18 outings. He scored his first goal March 18, his 24th outing.

He was a non-factor.

After a neck injury shelved him, Okposo returned and caught fire, recording one goal and eight points over the next nine contests.

Then an errant puck broke Okposo’s cheekbone April 15, forcing him to undergo season-ending surgery. He played only 35 of the Sabres’ 56 games.

“He definitely was in the zone when he got injured,” Granato said of the groove Okposo had found. “And he looks great out here from a standpoint. He’ll never lose being strong on his skates, but he’s absolutely quicker and lighter on his skates – his agility, mobility. And that, he pushed it hard in practices last year, and I felt that was key to him producing more before he got injured. So it just seemed like a trajectory to me.”

Granato said Okposo internalized what he experienced and “found a way to elevate even more.”