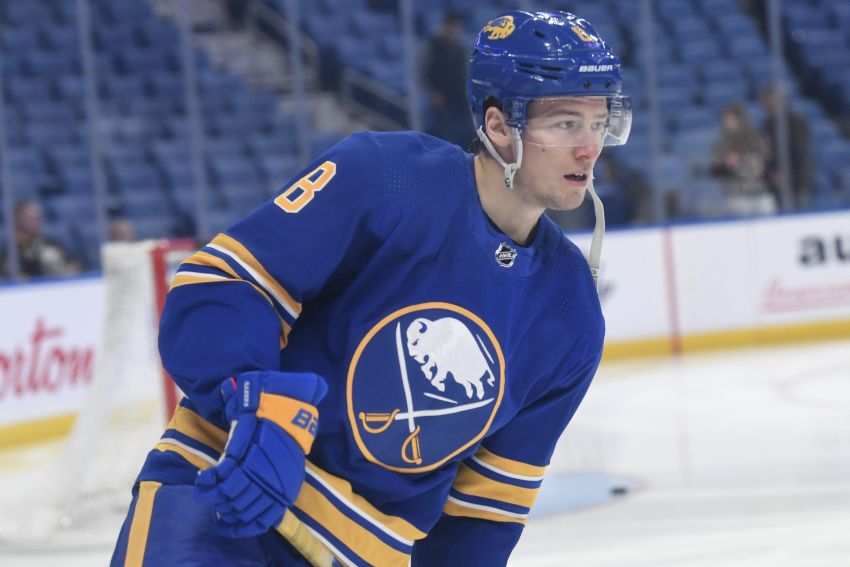 In his first months in Buffalo, Robert Hagg established himself as the Sabres’ premier shot blocker and one of their steadiest defensemen. At the same time, the Swede’s affable personality endeared him to his coaches and teammates.

So losing Hagg, who will be sidelined month to month with a lower-body injury, the Sabres announced this afternoon, leaves a significant hole in their lineup.

“We’re gonna miss him,” Sabres coach Don Granato said on a Zoom call this afternoon. “He gives us a shot blocker, he has some grit. So there’s areas within his game and his identity that we will miss, obviously. And as a personality, we’re going to miss (him) a little bit here.”

Hagg, 26, has compiled one goal, five points, a minus-12 rating and a team-high 56 blocked shots in 25 games this season. He missed three games earlier this month before leaving Tuesday’s 4-2 win against the Winnipeg Jets early.

This is Fitzgerald’s first in-season recall. The Sabres briefly summoned him to practice a few days before the season opener. He also spent time on the taxi squad last year.

The 5-foot-11, 188-pound Fitzgerald, 24, has compiled four goals and seven points in 21 outings with the Amerks this season. Fitzgerald, a right-handed shot, has spent most of the campaign playing on the top defense tandem beside Mattias Samuelsson, one of the Sabres’ top defense prospects.

“Those two guys have been paired down there, they’ve been great,” Granato said. “And I would imagine they’re both back up playing games here at some point. So we made a decision to bring Casey up and that has to do with dynamics, a lot of different dynamics that we’re kicking around, talking about.”

Granato said Fitzgerald, a third-round pick in 2016, 86th overall, will be scratched tonight but should eventually play. The Sabres close their three-game road trip Friday against the Pittsburgh Penguins.

Having coached Fitzgerald two seasons – 2013-14 and 2014-15 at the U.S. National Team Development Program – Granato knows him well. Those teams featured deep defense corps and a lot of future NHL players.

“He was a lot of fun as a teenager,” Granato said. “He was in a D group that we had (Noah) Hanifin, (Zach) Werenski, (Charlie) McAvoy, Caleb Jones, Fitzy. So pretty good group to practice with every day. Up front, we had Matthew Tkachuk and Auston Matthews, (Jordan) Greenway, who’s playing tonight, tons of forwards in the NHL.

“And he got two years against lots of NHL forwards head to head.”

Since turning pro late in the 2018-19 season, he has played only 72 games in the AHL. Two seasons ago, he was sometimes scratched or used as a forward.

“His road to the NHL has been a little bit longer, but he’s been impressive and effective throughout his entire career and really been in the top pairing in Rochester now for a while,” Granato said. “So I look forward to him, I’m excited. He’s put the work in, so he’s earned it, probably earned it a while ago. …

“And he knows our system very well, which is a bonus for me as a coach and, obviously, for him, coming in there’s not much he has to figure out in what to expect out of our players and systematically.”

In other news, Granato did not reveal tonight’s starting goalie. He said the netminder hadn’t been informed yet. He said Wednesday goalie Ukko-Pekka Luukkonen, who has played four straight games, and Malcolm Subban would split the next two games.

Update: Luukkonen will be making his fifth consecutive start, according to The Buffalo News.

Meanwhile, Granato winger Anders Bjork has a non-COVID illness and will be a game-time decision. Bjork missed Wednesday’s practice for maintenance. If Bjork can’t play, Mark Jankowski would replace him.

Update: Jankowski is in for Bjork.

In injury news, center Casey Mittelstadt, who underwent surgery last week to repair an upper-body injury, is listed as month to month on the team’s injury report.