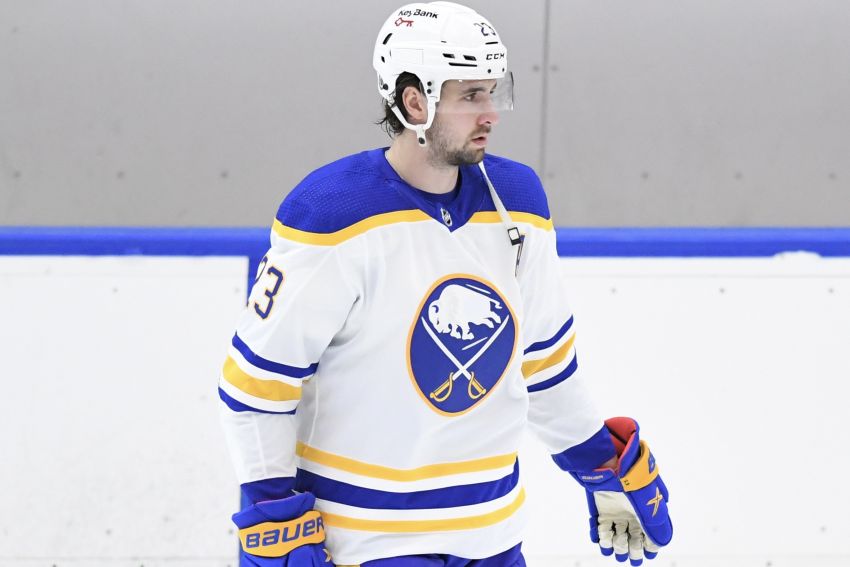 Samuelsson, who skated with his teammates Friday morning for the first time this season, hasn’t played since blocking a shot in the Prospects Challenge opener Sept. 17.

“You come into camp, your body feels great, you’re ready to compete, show what you have and unlucky timing for that one,” Samuelsson said prior to Friday’s 4-1 loss to the Boston Bruins at KeyBank Center. “To sit out the whole camp, yeah, it was hard mentally. You obviously want to be out there competing and trying to build something for this team.”

Granato said he tried to encourage Samuelsson, one of the organization’s top prospects, telling him he “did everything he should’ve done” to prepare for the season. He was often the best player on the ice at rookie camp before getting injured.

“It’s a bummer, it’s part of our business unfortunately,” Granato said. “But he did everything great to that point and he earned a lot of respect from us. He showed us in the games he played at the end of last year, he internalized those, he went to work over the summer and came back bigger, stronger, better. And that’s why I’m excited.”

The Sabres don’t have a timeline for the 6-foot-4, 227-pound Samuelsson’s return. Considering his long absence, he could be sent to the Rochester Americans to play games.

Samuelsson won’t accompany the team to New Jersey for tonight’s road game against the Devils.

The Sabres host the Tampa Bay Lightning on Monday before beginning a four-game road trip.

“I felt I was actually in the running for pushing for a spot on the team on a nightly basis,” said Samuelsson, a second-round pick in 2019, 31st overall. “Not that the chance was taken away or anything, but I just have to earn it in a different way now.”

Samuelsson said during some outings as a rookie he thought to himself, “I can be a full-time NHLer.”

“There are some games where maybe you don’t feel too good,” he said. “You know you have to do better over the summer. This last year, it’s a lot easier to prepare for something when you’ve had a taste of it. It was huge for me in summer training.”

How has it improved so quickly?

“We’re more comfortable being aggressive, I think,” Granato said. “That’s one thing that jumps out. There’s a different confidence and feel. And, obviously, when you get in a groove and you’re killing them, you feel better and better.”