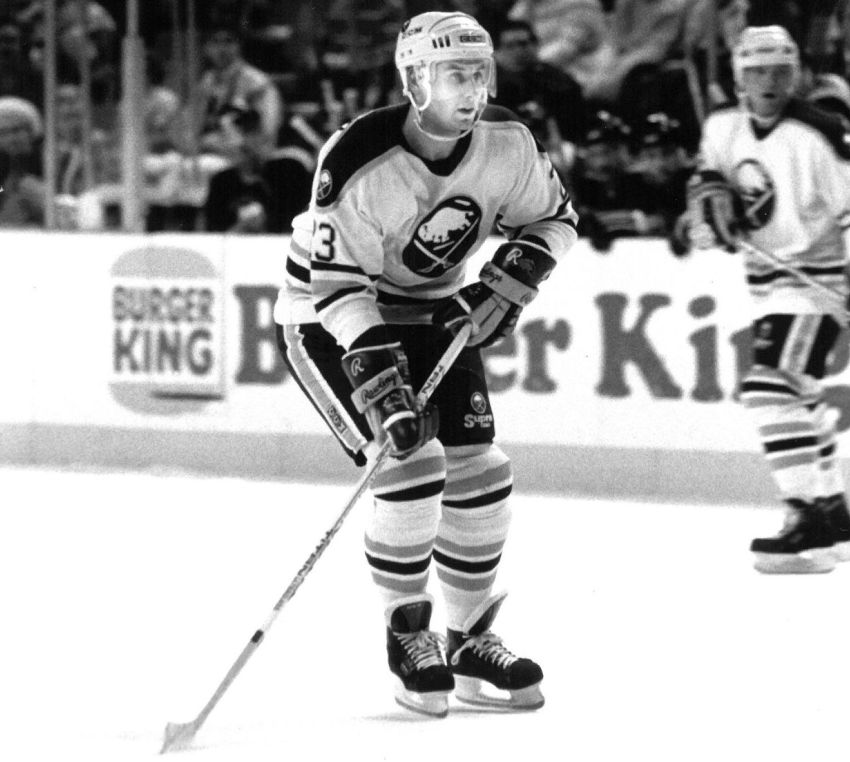 BUFFALO – As Sabres rookies Jack Eichel and Sam Reinhart put the finishing touches on two outstanding, high-scoring seasons, one name from the team’s past keeps popping up: Ray Sheppard.

Each week, it seems, the young forwards become the team’s first rookies to reach or approach milestones since Sheppard, who scored 38 goals and 65 points in 74 games in 1987-88 before fizzling out and re-emerging as one of the NHL’s most dangerous scorers.

Sheppard’s name has also been coming up, ironically, because he coached slick Philadelphia Flyers defenseman Shayne Gostisbehere, one of the NHL’s other top rookies, in Florida for years before he left for prep school.

If Eichel, who’s questionable for tonight’s road tilt against the New Jersey Devils, leads the team in goals (he currently has 23), he will become the Sabres’ first rookie to do so since Sheppard.

“I’ll tell you, they’re impressive,” Sheppard said about Eichel and Reinhart by phone Monday. “The skill level nowadays is just incredible, I think. Those two are going to go off and have unbelievable careers.”

In their 45-year history, the Sabres have had a slew of dynamic rookie campaigns.

Gilbert Perreault scored 38 goals and won the Calder Trophy in 1970-71, the franchise’s first season. Rick Martin scored 44 goals in 1971-72, then an NHL rookie record and still the franchise mark. Goalie Tom Barrasso won the Calder and Vezina Trophy as an 18-year-old in 1983-84. Tyler Myers quickly became one of the NHL’s best defensemen in his 2009-10 Calder campaign.

While Sheppard scored 357 NHL goals, including a career-high 52 with the Detroit Red Wings in 1993-94, the winger’s rookie season is probably the most overlooked of the bunch. He only mustered 26 more goals in his final two years with the Sabres. By 1989-90, he was in new coach Rick Dudley’s doghouse and, incredibly, back in the AHL with the Rochester Americans.

For one season in Buffalo, however, everything clicked.

“It’s hard not to be nostalgic, and where you start, you always remember where you start,” Sheppard said. “I’ve always in my heart appreciated the Buffalo Sabres for giving me the opportunity to play in the National Hockey League.”

That opportunity materialized after the Sabres bottomed out in 1986-87, finishing dead last in the 21-team league. Following an 18-goal campaign in Rochester, a 21-year-old Sheppard earned his first NHL promotion.

“They probably expected me to make the team and score (in the) 15 to 20 range or whatever,” Sheppard said. “I had been a goal scorer my whole life. My last year of junior (in the Ontario Hockey League) I scored 81 goals. … I just happened to have a really, really good first year.”

“I just remember it was such a talented team,” said Sheppard, who mostly played with Turgeon.

Being able to watch Andreychuk, a 640-goal scorer, was vital for Sheppard, who wasn’t exactly fleet afoot.

“Skating was always a tough thing for me,” he said. “I wasn’t very fast. … Being on the same team as (Andreychuk), he wasn’t a fast skater, either. But the way he positioned his body in front of the net, the way he could score goals, I tried to be like that.”

The smarts Sheppard developed around the net, coupled with a soft pair of hands, buoyed him.

That unexpected season “solidified that I could score in the National Hockey League,” Sheppard said. He finished second in the Calder voting behind Calgary Flames star Joe Nieuwendyk, who scored 51 goals, and earned All-Rookie Team honors.

Still, Sheppard never replicated his early success until he left Buffalo. After scoring 22 goals in 67 games in 1988-89, coach Ted Sator was fired. Dudley didn’t like Sheppard’s style, and he sat out regularly, scoring only four goals in 18 games before the Sabres jettisoned him to Rochester.

“I wasn’t a good enough player in my own zone,” Sheppard said. “I didn’t grind enough. When that happens, you sort of fall out of favor.”

At the end in Rochester, Sabres great Craig Ramsay, the club’s director of player personnel, told Sheppard to “believe in your abilities and keep doing what you’re doing.”

“(General manager) Gerry Meehan pretty much really didn’t want me there,” he said.

But Sheppard, who loved the local fans, was grateful for Ramsay’s words.

“When I did get to New York, I had that in my mind that I could still play,” Sheppard said. “I had a good year.”

Sheppard scored 24 goals in 59 games in 1990-91. He scored 187 goals – more than legends Joe Sakic and Steve Yzerman – over the next five seasons, the eighth most in the NHL over that stretch, according to hockey-reference.com.