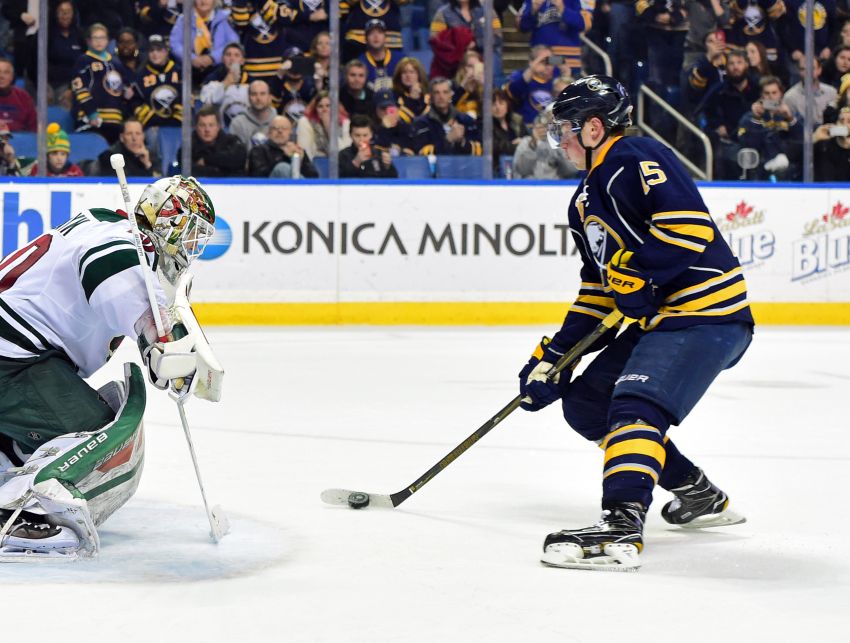 BUFFALO – Thanks to a scheduling quirk three months ago, the Sabres enjoyed a six-day Christmas break, a rare opportunity to recharge during the rigorous six-month, 82-game season.

At that point, 33 games into his career, Sabres center Jack Eichel had nine goals and 16 points, terrific numbers for a 19-year-old. Still, those statistics ranked nowhere near the NHL’s elite.

Eichel used the time to go home to Boston and relax. Having played only 55 total games over eight months as a college freshman last season, the professional grind was a new experience.

That short layoff ignited Eichel, drawing a line in his season. There’s the pre-Christmas Eichel and the post-holiday one.

“Yeah, I think it was huge for me, getting to go home and recharge the battery, take a little mental break for the first time in a while,” Eichel said last week inside the First Niagara Center. “I think it was nice, see some family and friends. It’s almost like a weight’s lifted off your shoulders when you go home. You’re just back home. It’s nice.”

On Dec. 26, in his first NHL appearance in Boston, the youngster dazzled in front of his hometown crowd, scoring a career-high two goals and four points in the Sabres’ 6-3 comeback win at TD Garden.

His most memorable NHL outing helped buoy Eichel, who has 13 goals and 33 points – as many points as Washington superstar Alex Ovechkin – in 38 post-Christmas contests. That’s 18th in the league over that stretch. The second overall pick has five goals and eight points in his last eight games entering tonight’s road tilt against the Carolina Hurricanes.

Three strong months have worked Eichel back into the Calder Trophy conversation for top rookie. Eichel ranks second among first-year players with 22 goals and 49 points in 72 games, trailing only Chicago winger Artemi Panarin, who has 25 goals and 63 points.

Eichel, of course, wants to join center Gilbert Perreault (1970-71), goalie Tom Barrasso (1983-84) and defenseman Tyler Myers (2009-10) as the only Sabres to win the award. His main focus, however, is simply on the final three weeks of the season.

“I think we’re hockey players, right?” Eichel said. “So you want to be the best in everything you do and really competitive, but I think more than anything you kind of just want to play well these last (nine) games.”

A fast finish could help Eichel, who will likely play tonight after battling what was believed to be food poisoning, receive strong Calder consideration. He needs one more point to become the first Sabres rookie with 50 points since Derek Plante in 1993-94.

“I think he’s got to be considered,” Sabres defenseman Josh Gorges said. “He’s had a pretty outstanding year.”

While the crop of talented rookies might be the best in years, there’s no clear-cut favorite, especially given Panarin is 24 years old and played 263 games in the KHL over parts of seven seasons. The Russian debuted in what is widely considered the world’s second-best league when Eichel was in seventh grade. His age and experience could turn off some voters. So could the spot he’s had on a line all season beside Patrick Kane, the league’s leading scorer.

Connor McDavid likely would’ve ran away with the award if he hadn’t suffered a broken collarbone in November. The Edmonton center could still win given he’s the most electrifying young player since Sidney Crosby and the only rookie over a point a game with 14 goals and 40 points in 38 appearances.

Some other top candidates:

– Philadelphia defenseman Shayne Gostisbehere, who spent a chunk of the season in the AHL, has 16 goals and 39 points 52 games. His wild 15-game point streak, a record for a rookie defender, helped the Flyers roar into the playoff race.

– Detroit center Dylan Larkin has 21 goals, 43 points, a plus-18 rating and ranks fourth in rookie scoring.

– Sabres winger Sam Reinhart, Eichel’s linemate, is the only other 20-goal rookie.

“This is a decision I’d like to make,” Bylsma said about the winner. “It’s a good one.”

Partial, of course, to Eichel.

A strong argument can be made for Eichel, whose 27 assists rank behind only Panarin and Domi.

Eichel has pumped a rookie-high 215 shots on net, 25 more than anyone else. He has averaged 19 minutes, eight seconds of ice time a game, more than any rookie forward in the top 10 in scoring.

Since Christmas, Eichel has one more point than Panarin in three more appearances. Remember, Eichel has played with different wingers all season, only occasionally settling into a regular line. The Sabres’ offense ranks 27th out of the 30 teams. Eichel has scored 13 percent of his team’s 171 goals.

Eichel, it should be noted, is also a minus-13, the worst rating among the players mentioned.

While Eichel missed practice Monday because of a doctor’s appointment, he’s improving from the “quick bug” that kept him out of a loss 4-1 in Toronto, Bylsma said. He accompanied the Sabres to Raleigh.

Bylsma said Eichel got to the hotel in Toronto early Saturday morning and ate the same food some of his teammates did, Bylsma said. By 4 a.m., Eichel wasn’t doing well.

“I’m not quite sure it was food poisoning,” Bylsma said. “That’s what it looked like.”