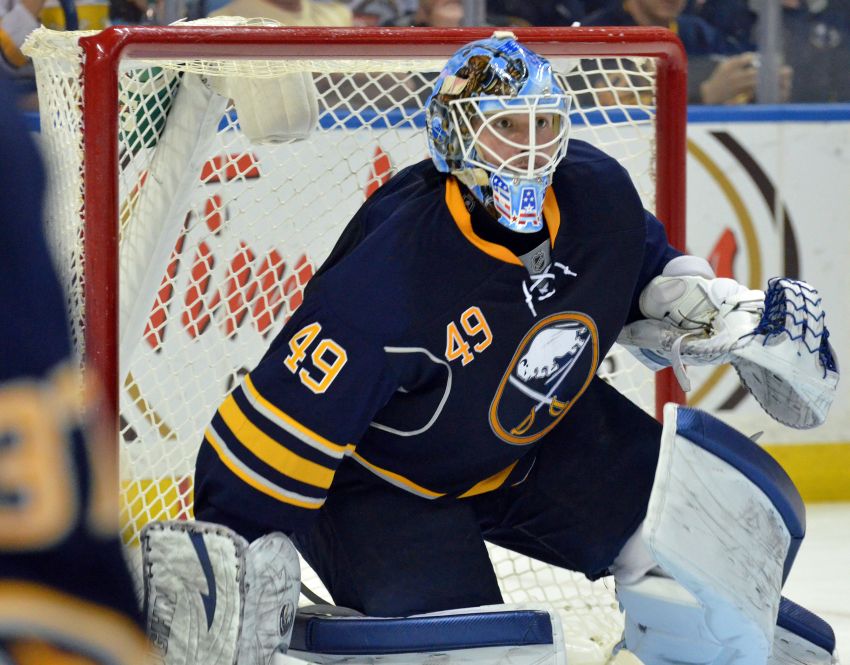 BUFFALO – On March 15, more than 4,000 miles from Buffalo, Sabres goalie Connor Knapp stopped 24 shots in the Alaska Aces’ 4-2 win against the Colorado Eagles in Anchorage.

Twenty-nine days later, Knapp, the sixth goalie on the organization’s depth chart, made his first NHL start in the Sabres’ 4-3 shootout loss to the New York Islanders.

Knapp grew up in York, a small town about 30 miles from Rochester.

“It’s crazy,” the 23-year-old told a throng of cameras and reporters after making 22 saves in the Sabres’ season finale Sunday. “I grew up watching Dominik Hasek play here. I used to watch Ryan Miller and Marty Biron practice with the Amerks and then play with Buffalo. It’s surreal, to be honest. Quite a moment in my life.”

The Sabres recalled Andrey Makarov to dress behind Matt Hackett last week. But the Sabres wanted Makarov to help Rochester’s playoff fight. So they sent the Russian back to the AHL on Friday.

Knapp was then summoned from the Americans to be Hackett’s backup.

When Hackett suffered what Sabres coach Ted Nolan called a “severe” right leg injury in Saturday’s 4-1 loss in Boston, Knapp subbed late. The Sabres recalled Makarov again Sunday, but Nolan wanted to rest the 20-year-old since he had just played two straight games with the Amerks.

“A whirlwind,” he called the last 24 hours. “It’s been crazy. Awesome, too. I had an inkling it might happen when I heard they would send Macky down.”

“Just getting the star struck mindset out of the way,” he said. “I think starting at home was big, too. This is a rink that I’m real comfortable with, development camps, training camps, working out in the summer here. So it was real familiar surroundings.”

Naturally, Knapp, who played for three ECHL teams before getting promoted to Rochester, hopes he made a strong impression.

Knapp stopped the first 11 shots. Anders Lee’s goal 17 second into the third period was a weak backhander from the right circle. Brock Nelson’s late tying goal was whistled under the crossbar from the slot.

“I handled myself well in a strange situation,” Knapp said. “I feel like I’ve developed quite a bit this year playing in the minors. That’s one of the downfalls of being in the Coast is you’re probably not seen as much by the organization. But it was definitely good to get here, get some exposure and show them how much I’ve improved.”

The difference between an ECHL and an NHL goalie isn’t much, he said. He wants to focus on making little adjustments.

“Those are the hardest to make,” Knapp said. “You really got to bear down in summer training and really fine tune your game after practice and with goalie coaches.”

Nolan will join the Latvian national team for the upcoming world championship in the beginning of May. Right now, the team is playing pre-tournament games throughout Europe.

“I’m going to take a little break,” said Nolan, Latvia’s coach since 2011. “It’s been a hectic year for all of us coming here in October and basically going non-stop from that point on. So I’ll take a little time to reassess what we have here, look at what we’re doing.

“(General manager Tim Murray) and I will discuss future plans. I won’t go over until I really have to, which is probably the beginning of May.”

Nolan will give updates on the team’s injured later, he said.

Sabres tough guy John Scott pummeled Isles enforcer Justin Johnson early during their first-period fight before the unknown rookie sent the 6-foot-8 veteran to the ice with one punch.

The 6-foot-1 Johnson was just minutes into his second NHL game after nine seasons in the minors. The winger played five ECHL seasons before cracking the AHL in 2010-11.

Scott was smiling in the penalty box following his fifth scrap of the season. The two played against each other in college and chatted during the pregame warm-up.

The Sabres honored retiring broadcaster Mike Robitaille with a pregame video montage and a watch. The crowd roared as Robitaille left the ice.

2 thoughts on “Sabres goalie Connor Knapp on first NHL start: ‘Quite a moment in my life’”