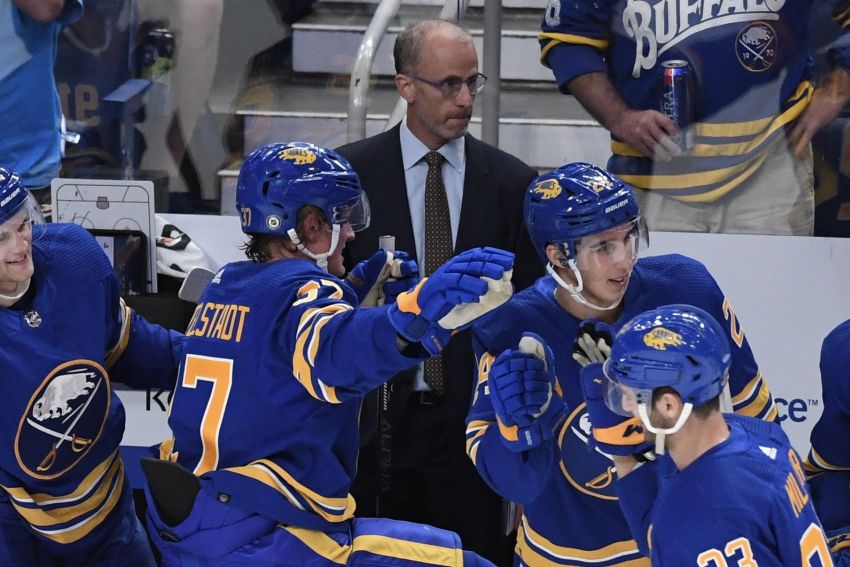 Don Granato knows he must help his current group of players grow together. ©2021, Micheline Veluvolu

BUFFALO – Through the first 18 games this season, Sabres coach Don Granato has exercised patience rarely seen in these parts over the last decade, often fielding the same lineup while keeping his forward lines and defense pairs intact.

Granato, whose Sabres were 2-7-1 in their last 10 games entering Monday’s 7-4 loss to the Columbus Blue Jackets at KeyBank Center, said he understands the reflex is to “change everything” when a team battles adversity.

“But has our organization had any stability?” Granato said on a Zoom call prior to Sunday’s 5-4 road loss to the New York Rangers.

The answer, of course, is no. The Sabres haven’t made the playoffs since 2011, an NHL record-tying streak of futility.

Granato is their sixth coach in the last eight years. Kevyn Adams is their fourth GM in that span. Meanwhile, their roster has constantly been overhauled.

So other than occasionally inserting a fresh body or tinkering with his trios or combos, Granato usually leaves his lineup alone.

“We need stability, and stability is in some part confidence,” Granato said. “So I don’t want to appear erratic, to bend to just immediate pressure, because there’s pressure all the time. So if you just keep responding to pressure by changing everything, you’re going to lose yourself, you’re going to lose your base. And I don’t want that to happen. We know what we are.”

Right now, the Sabres are a rebuilding team. The roster is filled with journeymen. Two of their best players – No. 1 goalie Craig Anderson and top center Casey Mittelstadt – are hurt. Two of their other biggest assets – defenseman Henri Jokiharju and winger Victor Olofsson – just returned from injuries.

“We’re going to be challenged and we can’t keep trying to change things every time we’re challenged,” Granato said. “We need to at some point just stop all the changing and fight through it. And that’s more of my underlying approach to things. Now, the entire time, yeah, we’re looking at it, we’re saying, ‘Yeah, we could change that or tweak that.’

“But … we have to learn how to execute better and become better. And when you keep changing things, you lose focus of that. You think the solution is in changing things. The solution is looking at what you didn’t do and fix it. And that’s where’s we’re pushing our guys. So I don’t want massive change.”

“That said, when guys come back in the lineup, there is going to be change.”

Having Jokiharju and Olofsson healthy again forced Granato to make some changes.

After Butcher was on the ice for three second-period goals against Sunday, Granato benched him for the entire third period.

“I didn’t feel he was playing as well as he could play and … he’s a better player than he’s played recently,” Granato said prior to Monday’s game.

“We’ve missed the right shot, obviously, had to put a lefty there for 17 games,” Granato said. “I think it was a challenge for those guys … that did shift over there.”