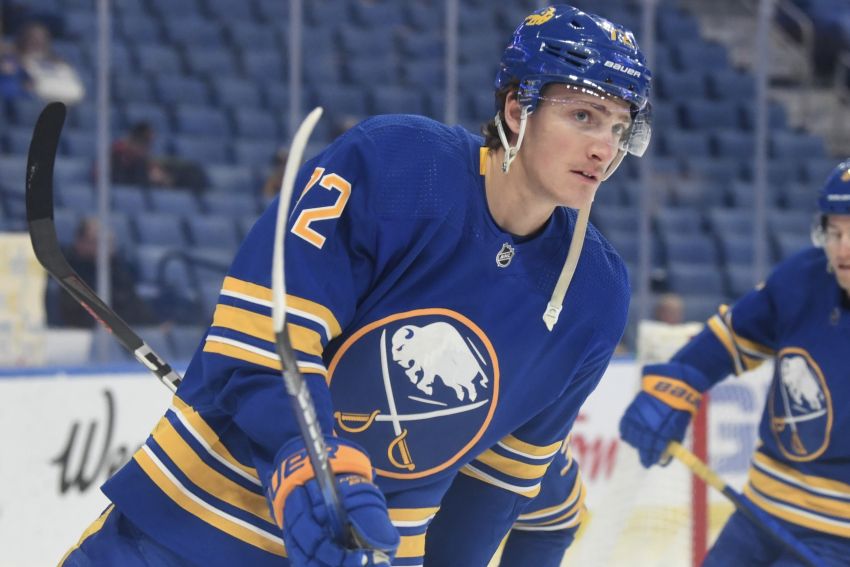 Tage Thompson scored Sunday and had the puck in the waning seconds. ©2021, Micheline Veluvolu

For the second time in nine days, overtime felt imminent. After blowing three leads against the Rangers, the Buffalo Sabres would leave New York with at least a small reward, a well-deserved point, or perhaps a victory.

Sabres center Tage Thompson just had to keep the puck pinned against the boards behind his net for another half second or so.

“Everybody in the building knew the scenario and the clock, the situation,” Sabres coach Don Granato said on a Zoom call after Ryan Lindgren scored with 0.4 seconds left in the third period, giving the Rangers a dramatic 5-4 win inside noisy Madison Square Garden. “We were no longer in a situation to score a goal, so the primary focus should have been on being in a defensive posture to make sure we didn’t get scored against.”

Even after Adam Fox pried the puck from Thompson with about two seconds left, the Sabres should’ve been able to stymie the Rangers’ last-ditch attempt.

“We lost inside position,” Granato said.

As Fox fed Mika Zibanejad in the right circle, no one noticed Lindgren sneaking in from the point. Lindgren’s uncontested shot beat Sabres goalie Aaron Dell.

Sunday’s loss was the Sabres’ second in the waning seconds in barely a week. On Nov. 13, Morgan Rielly scored with 11.8 seconds left in the third period, giving the Toronto Maple Leafs a 5-4 triumph.

Still, the gut-wrenching loss to the Rangers represents progress after the Sabres’ wretched effort in Thursday’s ugly 5-0 home loss to the Calgary Flames.

Against the Rangers, the Sabres played more aggressively than they did Thursday. The teams combined for four game-tying goals in the first 40 minutes.

During a wild second period, four goals were scored in a span of 1:22. The third one, defenseman Rasmus Dahlin’s third score in seven games, put the Sabres up for the third time.

Then in the third period, Granato said the Sabres tightened up.

“We need to be assertive,” he said. “When we struggled in the third, we hesitated, maybe took a step back. There was much less of it, obviously, but much, much (more) improvements since the last time we were in that situation.

“But … we just have to make sure this doesn’t take away from progress and make us hesitate. These situations that happened to us in the last few days, when you’re not getting what you want, you tend to be more hesitant, and we can’t have that happen.”

Dell made 31 saves in his second start and third appearance this season.

Olofsson, 26, hadn’t played since Nov. 2. The Swede skated at right wing beside Thompson and Jeff Skinner.

“I felt OK,” said Olofsson, who played 17 minutes, 2 seconds. “The timing, the legs were a little bit off in the beginning but … I felt pretty good.”

Olofsson, the Sabres’ leading scorer when he was injured, recorded an assist on Dahlin’s goal, his 10th point in nine games this season.

With Olofsson back, the Sabres scratched center Arttu Ruotsalainen for the first time since opening night. Asplund, who subbed for Olofsson beside Thompson, moved to left wing beside center Zemgus Girgensons and Kyle Okposo.

Girgensons shifted over from left wing.

Notes: Sabres defenseman Will Butcher did not play in the third period but was on the bench. He skated just 11 minutes, 31 seconds. … Asplund’s power-play goal ended zero of 16 drought. … The Rangers pulled goalie Alexandar Georgiev after the second period and replaced him with Igor Shesterkin.