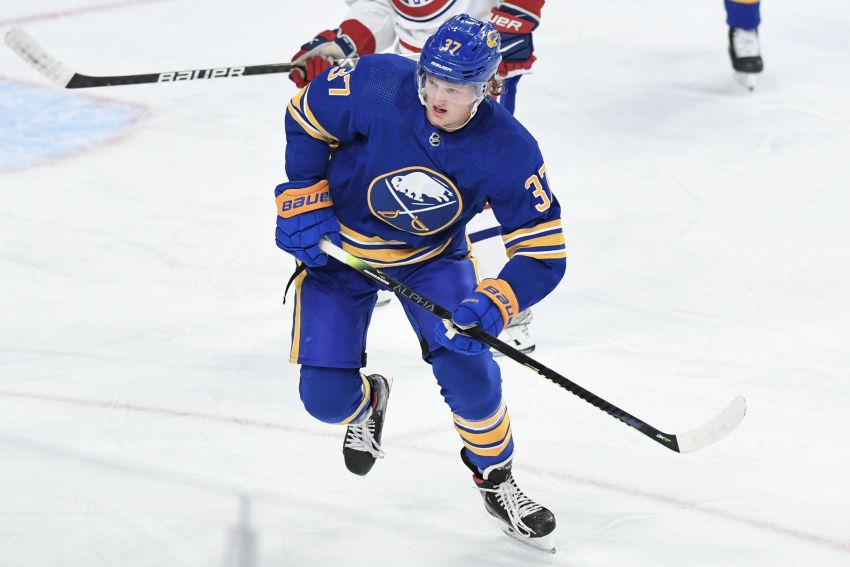 Mittelstadt, 22, has missed the last 13 contests recovering from an upper-body injury he suffered Oct. 14, opening night.

“With Mittsy, it’s still progressing, which is good news,” Granato said following this morning’s practice inside KeyBank Center. “That might mean it’s less than a couple weeks or around there (until he returns) if he continues to progress. But with the type of injury he has, we still need to see that progression. That’s a very optimistic timeline.”

“He can do everything else, but when it comes to pulling the trigger, it’s affecting him,” Granato said. “So … that’s the tedious nature of it, because it’s just a little, little thing that just won’t stop nagging him and prevents him from shooting the puck the way he can shoot it.”

He added: “You can wake up tomorrow and Victor’s injury could be completely resolved. It’s that close but it’s also that impeding to him shooting the puck.”

Granato said Olofsson, 26, has been skating since he left the lineup Nov. 2. The Sabres originally thought the Swede would just miss a game or two.

“The injury he had, the assessment has not changed,” Granato said. “What’s changed is we’ve tried to get more data on it, more information through X-rays, MRIs, different scans to see if there’s anything more in there, and there’s not. So the healing process is just way slower than anticipated.”

In other injury news, Granato said defenseman Henri Jokiharju, who suffered a lower-body injury opening night, has started skating. Jokiharju, 22, was recently wearing a walking boot and using a scooter around the rink.

“Joki’s injury is there should be no hiccups now,” Granato said.

The Sabres don’t want to rush the Finn back.

“It’s getting him back into enough reps on the ice gradually, unfortunately, because there’s some atrophy there,” Granato said. “We’ll reevaluate that and have a lot more information now that he’s starting the process on the ice.”

“It’s another delicate injury that’s gray from guy to guy and situation to situation from context to that injury,” Granato said. “Whereas if you look at a broken bone, you look know the exact heal time. You can calculate with a degree of accuracy those injuries. His is just a little bit different in that respect, as is Victor’s.”