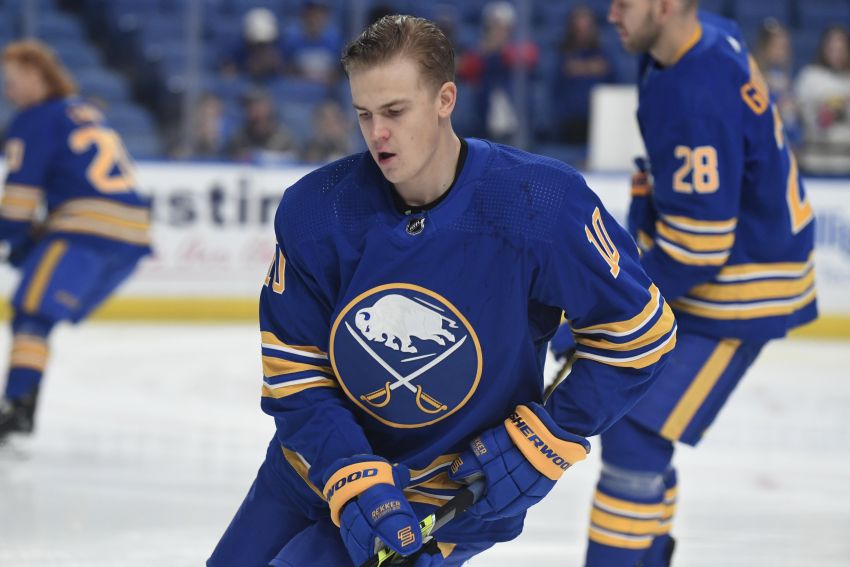 BUFFALO – When a puck hit Henri Jokiharju’s right ankle early on opening night, he knew he was injured. Still, the Sabres defenseman left his skate on, tightened the laces and finished the game.

“That helps you play through the game but if you take that boot off, it’ll swell and you can’t put it back on,” Jokiharju said Friday after practicing for the first time since breaking his ankle Oct. 14.

Sabres coach Don Granato said Jokiharju, 22, likely won’t return for Sunday’s road game against the New York Rangers but should play later in the week. The Sabres also Monday, Wednesday, next Friday and next Saturday.

“It’s a matter of strength and making sure we give him the time to get back to strength,” Granato said. “But he looked great and the only concern going forward would be how he may fatigue. But I was happy with the first day. He skated hard in his rehab skates and he certainly had no problem with the pace today.”

He added: “It usually takes a guy two to four practices before they get back going because they’ve had so many skates beforehand.”

The Sabres sorely need Jokiharju, one of their steadiest presences, back in the lineup. The Finn’s return will give them three right-handed defensemen, meaning they can balance their pairs.

“It’s gonna be big,” Sabres winger Kyle Okposo said of Jokiharju’s return. “He’s been so solid for us the last couple years since he came over here. I really liked the way he looked in camp and that first game.”

Jokiharju, who has missed the last 15 games, practiced beside Jacob Bryson on Friday inside KeyBank Center.

“It looked like he stumbled before the hit, which left him more exposed when he was going back,” Granato said. “If you look at the end zone replay, you can see him trip up before he takes the hit so he couldn’t defend himself as well. But he’s fine.”