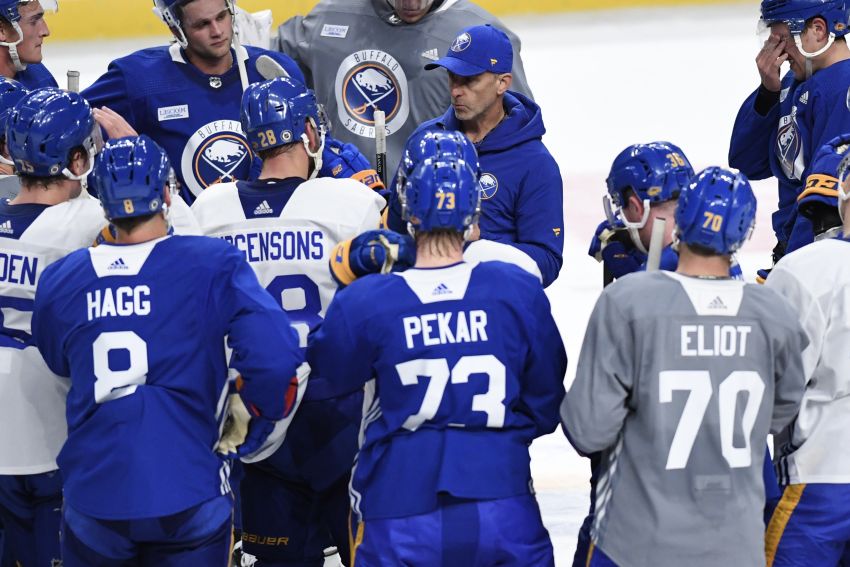 Don Granato believes it’s important to have clarity with his players. ©2021, Micheline Veluvolu

BUFFALO – In his early days behind the bench in junior hockey and in the ECHL, Sabres coach Don Granato was one-man show. He had no assistants to help him.

“So I had to be close to players,” Granato said prior to Thursday’s 5-0 loss to the Calgary Flames at KeyBank Center. “I had to get a feel for the team and a beat on the team.”

Right away, Granato learned he must separate the personal and professional sides. He told his players he cared about them and wanted them to succeed. Still, they all had a job to do. So he laid out some parameters.

“Here’s what you have to do well, here’s what I see and my decisions are going to be based on A, B, C here,” Granato said. “You’re going to get ice time or not based on this criteria. I think it’s really important for players and their confidence to know what’s expected by me as their head coach and what’s demanded. Then they can clear their mind and they have a sense of objective. It’s all getting to that clarity.”

Granato, 54, said he never had a regular assistant – he had some player-coaches, including Jason Christie, who’s on his current staff – until his fifth or sixth year.

These days, Granato still strives for clarity. Even with a large staff, he believes it’s important to make himself available. Not all head coaches, of course, do that.

“We have meetings as a staff and there are some guys I feel like, ‘I’ll take that guy, these guys, this line, or the D today,’” Granato said. “Based on what I just watched in film or what I wrote down on the bench, then reviewed later. It’s a feel day to day and when you are in the position of a head coach, obviously, you are changing lines and making all those decisions.

“Sometimes it’s better for the guy to hear directly from you in certain cases. You factor all that in and there’s no set pattern. It’s more of a read and react for me.”

Sabres winger Anders Bjork, who recently busted out of a long slump, texted Granato last Thursday and asked him if they could watch video together.

“That’s a huge strength of his,” Bjork said Tuesday in Pittsburgh. “He’s very approachable and guys feel comfortable doing that like myself. I talked to some other guys and they were like, ‘Yeah, talk to him because he’ll give you good insight and show you things that you don’t see by yourself when you’re watching it.’

“I mean, I’ve done it with other coaches as well, but it’s great to be able to approach the head coach. It was very helpful and having that relationship with him is really cool. And I think he makes it a point to have that with all his players. I think it’s inspiring for us and guys want to improve and work for him because of that.”

Notes: Having sent winger Brett Murray back to the Rochester Americans on Wednesday, the Sabres had just one healthy scratch Thursday, defenseman Christian Wolanin. … The Sabres hadn’t played Calgary since Dec. 5, 2019, a 4-3 Calgary win. … Ex-Sabres defenseman Nikita Zadorov played Thursday. The Flames are the Russian’s third team in the last three seasons.