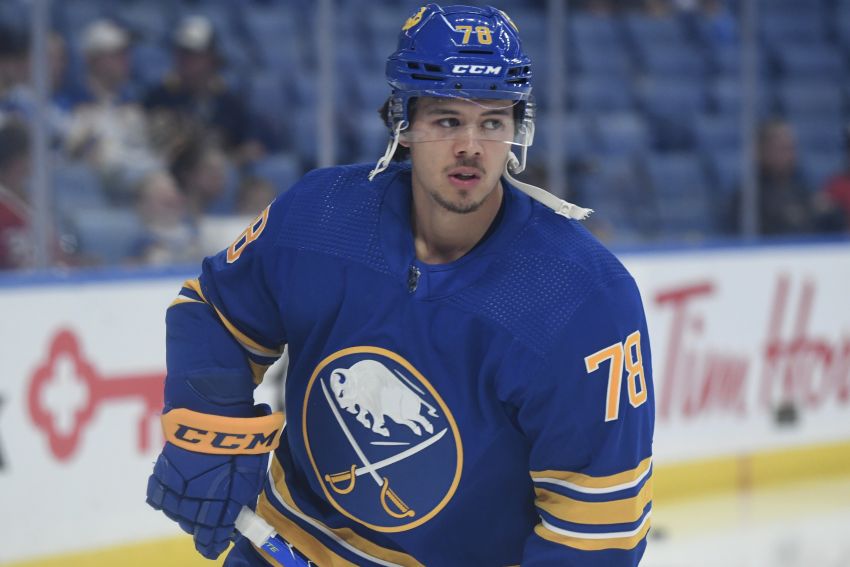 PITTSBURGH – For a second or two, it looked like trouble was imminent. Connor McDavid, hockey’s most lethal scorer, had a head of steam as he zoomed toward Buffalo Sabres defensemen Jacob Bryson and Colin Miller late Friday.

After grabbing a 3-2 lead late in the second period, the Sabres endured an offensive onslaught from the Edmonton Oilers over the final minutes. McDavid, who had mostly remained quiet at even strength, seemed ready to explode.

But as McDavid roared into the zone and attempted to split the defense, the 5-foot-9 Bryson calmly drove him to the outside, nullifying his scoring chance with about two minutes left. The Sabres held on for the victory inside KeyBank Center, ending their five-game winless skid.

“That helps with confidence,” Bryson said Monday of stymieing the NHL’s biggest superstar. “You end up stopping those guys and then you come back to the bench and you’re like, that’s one of the best players, I can do that to anyone. You feed off that.”

Bryson’s defense of McDavid illustrates his growing confidence and, according to Sabres coach Don Granato, offers “a glimpse of his potential.”

“He is intelligent enough, competitive enough and he will do those things more and more with greater calm as he gets more reps,” Granato said after the Sabres prepared for tonight’s game against the Penguins at PPG Paints Arena.

With his parents, Dean and Nancy, watching him play in the NHL for the first time, Bryson skated 23 minutes, 19 seconds against the Oilers and a career-high 24 minutes, 23 seconds in Saturday’s 5-4 loss to the Toronto Maple Leafs.

The Providence College product will likely eclipse the 20-minute mark for the fifth time in sixth outings tonight. Expect Granato to match Bryson and Miller, his partner all season, up against another superstar, Sidney Crosby.

Bryson’s ability to quickly process and implement into his game has helped accelerate his development and showcase a maturity that belies his age. So has his willingness to play a fearless style. Granato often tells his players they must play freely.

“As Donny preaches, he always tells us, ‘Don’t be afraid to make mistakes,’” Bryson said. “That’s the biggest thing. You can’t be scared to go out there and make a mistake and think the coach is going to be mad at you. Donny understands that mistakes are going to happen for each individual. Nobody’s perfect.

“I think with that being said, just have that in the back of your mind. When I go out there, I’m not scared to do things on the ice that make good plays. My game is taking chances sometimes. When I come back to the bench and I do make a mistake, I know he’s not going to yell at me or rant me out.

“I think the strong suit of my game is just taking chances out there and to make those small and smart plays is big thing for me. I think that just comes with confidence. The more games I play, I’m feeling more and more comfortable as the years have gone on.”

Bryson, a fourth-round pick in 2017, 99th overall, has been in the big leagues less than nine months. But even last season, as the Sabres struggled and finished dead last, Granato could see his confidence growing.

Granato said Bryson’s first defense partner, Rasmus Ristolainen, who was traded during the summer, mentored the rookie and “just gave him the calm to do what he wanted to do.”

“And before long, he’s in the NHL and he’s giving heck to Risto, even chirping him and things like that fun-loving way,” Granato said. “So you could see, immediately, the confidence that he had. And what that shows you as a coach is the opposition is not overwhelming them. When the opposition and the pace of the game – size, strength, speed of the opposition – is overwhelming you, the player tends to lock up and tighten up and even absorbing new information is tough. That might be when you have to send a guy to the American League, for example.”

Bryson, who played 66 games for the Rochester Americans, will likely never play in the AHL again. If he makes an error and is given information, he can go out and correct it right away .

“Brys can recalculate or recalibrate really quick because of that intelligence and his confidence,” Granato said. “And so … even mistakes, he sees that these are, OK, potential areas to get better because I can find the solution and it’s not a fear. So there’s a lot of that in his game, which is going to help him just continue to improve.”