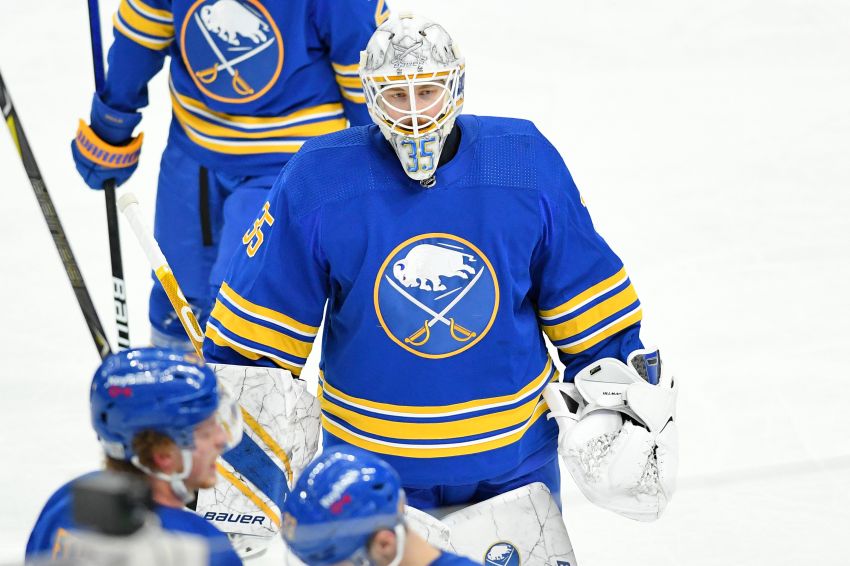 The days of the Sabres trying to lure big-name free agents to Buffalo are over. When the market opens today, they’ll likely be bit players, focusing on filling some of their many holes and adding depth while attempting to re-sign goalie Linus Ullmark.

Ullmark’s departure would be a massive blow to the Sabres. The Swede, their backbone and MVP, earned nine of the team’s 15 wins last season in only 20 outings.

They don’t have a replacement for him.

Top goalie prospect Ukko-Pekka Luukkonen needs more seasoning in the minors. The graying Carter Hutton is an unrestricted free agent and likely won’t be re-signed. Dustin Tokarski, who subbed admirably for 13 games last season, could be considered for the vacant backup role. Still, it’s more likely he ends up in the AHL with Luukkonen.

So even if Ullmark returns, the Sabres must find at least one netminder in free agency or through a trade.

But could you blame Ullmark, who turns 28 on Saturday, for bolting town? If he posted a 2.63 goals-against and a .917 save percentage for the Sabres, he might be a star for even an average team. He has plenty of suitors.

Meanwhile, center Jack Eichel, their captain and most dynamic player, could be dealt in a matter of days or weeks.

The Sabres are in full rebuilding mode, and general manager Kevyn Adams doesn’t want to look for stopgap measures. He feels the team’s young players must be thrown into the fray. So expect them to sign role players.

“What … I believe is critically important with our team makeup right now is not boxing young players on our roster right now out of crucial situations and crucial minutes,” Adams said Saturday inside KeyBank Center after the NHL Draft ended. “One of the best ways to learn in this league is by doing it, by experiencing it, being out there at the end of a game up a goal or down a goal, having that feeling of taking a faceoff when the game’s on the line.

“If you’re a Casey Mittelstadt or a Dylan Cozens, that’s important. So we want to make sure we put the right pieces around the young core of players that we have, but you want to make sure they’re also getting out there and having the opportunity to grow and learn.”

Of course, given the Sabres’ sorry state, the top free agents – defenseman Doug Hamilton and winger Gabriel Landeskog, for example – probably have zero interest in the team anyway.

Less than a year ago, the Sabres stunned the hockey world by signing the biggest name on the market, winger Taylor Hall, to a one-year, $9 million contract. Then Hall endured an awful 37-game run in Buffalo, scoring just two goals before being traded.

Here’s more of what could transpire for the Sabres in free agency:

– The Sabres sorely need to beef up their blue line depth. Counting their restricted free agents, they have just six defensemen with NHL experience. Only two – Henri Jokiharju and Colin Miller – are right-handed shots, which are tougher to find.

Not long ago, with Ristolainen, Will Borgen (lost in the NHL Expansion Draft) and Brandon Montour (traded last season), they had a surfeit of righties.

– Not surprisingly, the Sabres possess weak depth up front. Counting Eichel and their restricted free agents, they have just 13 forwards with NHL experience.

The Sabres have become woefully thin down the middle. After Eichel, three of their four centers – Cozens, Mittelstadt and Rasmus Asplund – spent much of last season playing wing.

The other pivot, Cody Eakin, struggled in the first season of his two-year, $4.5 million contract, compiling more healthy scratches (10) than points (seven).