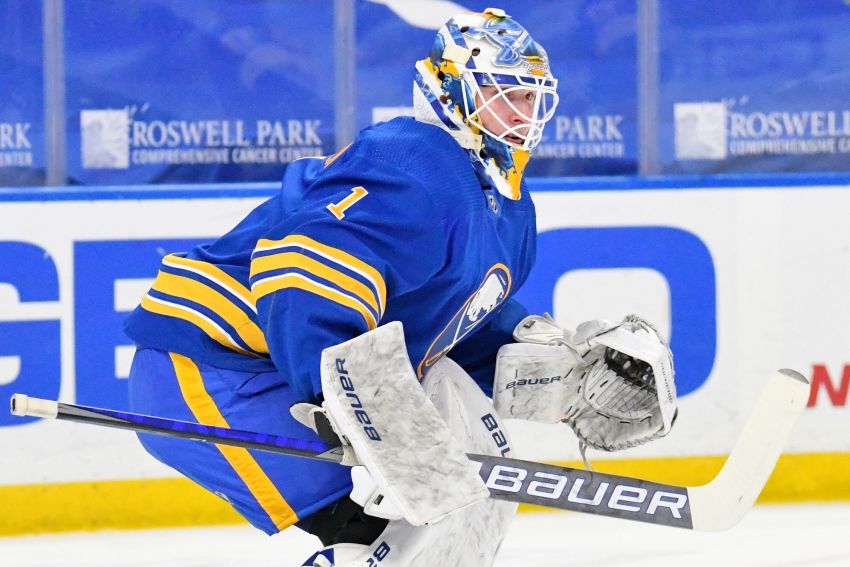 Nothing, it seems, can frazzle Luukkonen. The rookie looked sharp again throughout his second NHL start, stopping 38 shots in Tuesday’s 3-1 loss to the New York Rangers inside Madison Square Garden.

The 6-foot-4 Luukkonen challenged shooters, tracked shots through traffic and stood his ground as players whacked at second chances – all signs of the Finn’s confidence, according to Granato.

“That’s everything, as we know, to be confident,” Granato said on a Zoom call. “You can see that in a player’s posture and how he carries himself.”

When the Rangers blitzed the Sabres in the second period, pumping 20 shots on goal, Luukkonen, 22, thrived under the heavy workload. He even stopped Adam Fox’s opportunity halfway through the period with his head.

“He embraced it, he’s looking forward to pucks coming toward him,” Granato said. “The great goalies I’ve been around, I can cite Corey Crawford – there’s three breakdowns and if a goal went in on him, he was upset at himself, not at the three breakdowns. Ukko looks like that.

“It doesn’t matter what happens around him. He wants to make a save. So great concentration, great focus, and clearly that’s a good trait if you’re a goaltender.”

Luukkonen said he doesn’t think about the intense action. He faced 19 shots during the third period of his debut, Friday’s 6-4 win over the Boston Bruins.

“Sometimes it’s actually even easier to play in periods like that when there’s a lot of stuff happening,” he said. “So your mind kind of automatically just is on the game all the time, you don’t really have time to count the shots.”

Sabres center Casey Mittelstadt said he hasn’t seen many young goalies enter the NHL and possess “calmness and poise in the net” like Luukkonen.

“There was a long shift there in the second, he just stood his ground and made some big saves and he gets right back up and he’s ready for the next one,” he said.

The Sabres have helped Luukkonen out at times. Like Friday, they clamped down in front of him early, allowing him to ease into the game.

The Sabres carried the play, outshooting the New York Rangers 9-1 in the opening minutes and 16-6 in first period.

“Maybe I feel like control the game,” Luukkonen said of the tight defensive play in front of him. “Usually it makes your game easier, you kind of get to make a couple of control saves at the start and can get a bit relaxed from the start of the game and comfortable without battling all the pucks from the start.”

But the Sabres couldn’t convert their early chances, and Brendan Smith put the Rangers up 1-0 2:22 into the second period before center Sam Reinhart’s power-play goal at 19:56, his team-leading 22nd goal, tied it.

The Rangers had a man advantage because Sabres winger Drake Caggiula was penalized for delay of game. Replays, however, showed the Rangers deflected the puck over the glass.

Reinhart continued his tear, scoring for the third straight game, a torrid in which he has recorded five goals and six points in the last three games. He has registered nine goals and 14 points in 15 outings this month.

“He’s really stepped up lately,” said Mittelstadt, who assisted on Reinhart’s goal. “Yeah, I think that’s pretty much as simple as you get him the puck and he’s been finishing and making plays. It’s not even so much the points, it’s making small plays all over the rink.”

The Sabres have scored power-play goals in three straight contests for the first time since a five-game streak from Feb. 18 to 25.