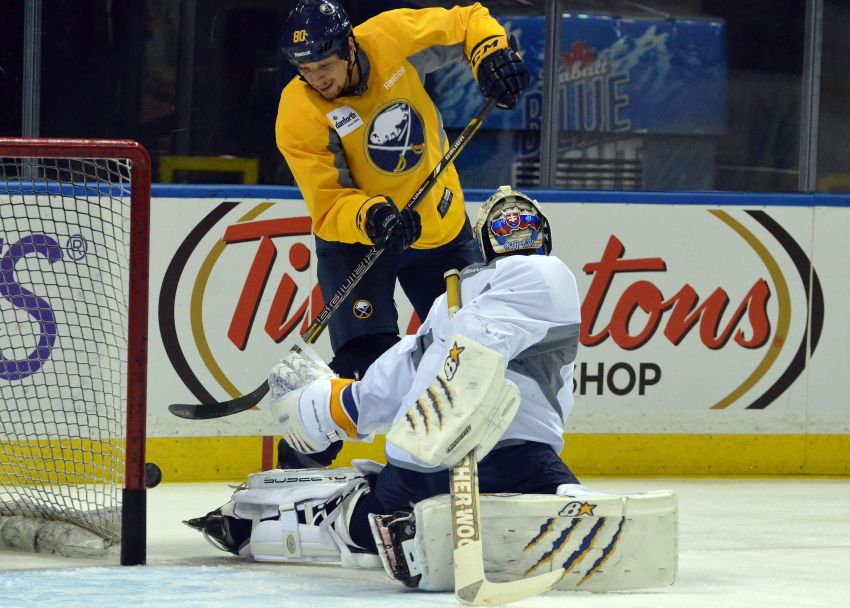 Rumors are swirling the Sabres will flip them before Wednesday’s trade deadline. Halak, an unrestricted free agent following the season, is believed to be wanted by a couple of playoff teams.

“Anything can happen for now on,” Halak, who won’t play tonight in Dallas against the Stars, said Sunday inside the First Niagara Center following their first practice with the Sabres.

Stewart added: “I don’t really know what to think. You hear about all the rumors.”

The two had good gigs going in St. Louis.

Stewart, who said he’s endured a “roller coaster” season, had 15 goals and 26 points in 58 games.

“I’d be lying if I said if I wasn’t disappointed at first,” Stewart said about the trade. “If you think I’m going to come in here and pout and feel sorry for myself, that’s not the kind of person I am. So I’m going to make the best of the situation and look at the positive. They got a good, young team here. I grew up born and raised in Toronto. I’m happy to be back on the East Coast.”

“It’s not easy,” Halak said. “Obviously, you build something during the season.”

Contenders rarely trade their starting goalie during the season. But the 28-year-old Slovak knew he could be dished. The Blues are built to win the Cup now.

“There’s been a lot of talk this season already,” Halak said. “I’m not saying I knew, but I kind of expected that something was going to happen. I was really shocked when that happened right before the game. I thought if something would happen, it would happen on (Wednesday).”

What awaits Miller, the Sabres’ MVP this trying season, in St. Louis’ net?

“I think my time there I definitely learned to play at all ends of the rink,” said the 26-year-old, the 18th overall pick by Colorado in 2006.

At 6-foot-2 and 231 pounds, Stewart provides size the Sabres need badly. He should skate beside center Cody Hodgson and Matt D’Agostini tonight.

“You got to play to your strengths,” he said. “As you can see, I’m going to use my big frame to my advantage and finish checks and get to the net, just go score those ugly goals and bang some bodies around.”

He added: “I think I’m your typical power forward who likes to play that physical game. I like to use my speed to my advantage. … I have no problem sticking up for teammates.”

Both players know one new teammate, D’Agostini, a former Blue, well. Halak also played with him in the minors and in Montreal.

“I told him we might meet again, and here we are,” Halak said.