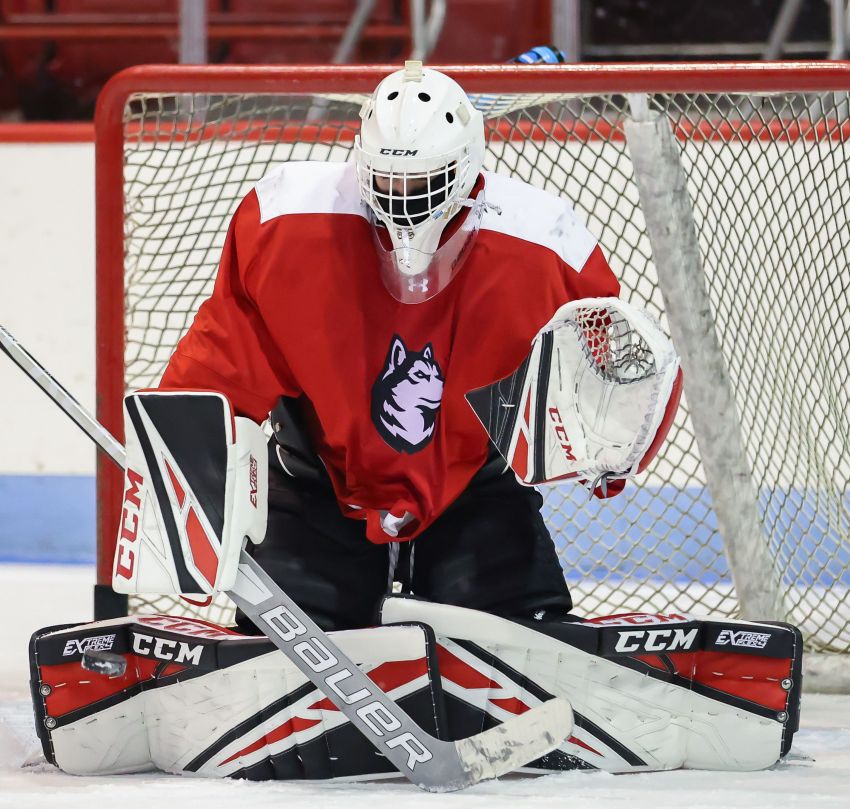 On his bedroom door, Buffalo Sabres goalie prospect Devon Levi has a small whiteboard he writes two numbers on every morning.

If everything goes as planned, Levi, who was acquired by the Sabres from the Florida Panthers in Saturday’s Sam Reinhart trade, will make his NCAA debut in early October and begin his tenure as Northeastern’s No. 1 goalie.

“He’s itching, yeah,” Northeastern coach Jerry Keefe said of Levi’s desire to play. “He’s excited. You can tell in his voice when you talk to him on the phone.”

Levi, of course, was supposed to be a major part of the Huskies last season. Then, seemingly out of nowhere, Team Canada summoned him to its World Junior Championship training camp in November. A season-ending rib fracture came later.

In between, Levi enjoyed what he called “the best time of my life,” backstopping his country to the gold medal game against Team USA on Jan. 5.

Levi, 19, hadn’t even been invited to the country’s summer camp months earlier. But goalie coach Jason LaBarbera watched video of Levi’s dynamic performance for Canada at the World Junior A Challenge in 2019 and decided he deserved a look.

While the Panthers drafted Levi in the seventh-round in 2020, 212th overall, he had never played hockey above Junior A. His chances of cracking the World Junior team appeared to be slim.

Still, the 6-foot, 185-pound Levi beat out four other goalies and earned the starting job for the tournament, which was held in a bubble in Edmonton because of the COVID-19 pandemic. Within days, he morphed from an unknown into Canada’s backbone.

“It was unreal,” Levi said of his experience at the tournament. “I was honestly living like in a dreamland. We were in a little bubble like isolated from the rest of the world. It was like we were in our own world just playing the game we love with all these great guys, great hockey players.”

After suffering his only loss of the tournament and settling for silver, he returned to Northeastern, where he was preparing to play his first NCAA game.

“That’s when the injury got a bit worse,” Levi said.

Levi, who’s from Dollard-des-Ormeaux, Quebec, a Montreal suburb, had been injured in Canada’s opener but did not think much of it and kept playing.

“I had so much adrenaline that it wasn’t even a question to step out,” he said.

Following the World Juniors, he said “the adrenaline went down a little bit.”

“I realized that the body was a little bit beat up just from the tournament and I knew I needed a little bit of a break,” he said.

That break would last the rest of the season. Levi had suffered a stress fracture in a rib.

But it was hardly a lost year. Levi’s dazzling performance in Edmonton could be a career-changing two weeks.

“I felt like I got a year’s worth of experience at the World Juniors and I got a lot of practice time before heading the World Juniors, so I still do think I got a really good amount of development last year,” Levi said.

“People really didn’t know of him that much, even going back to the World Juniors last year,” Keefe said of Levi. “They had no idea, they just wanted to get him to camp and kind of see what he can do. … He’s flown under the radar.”

Levi’s proud of the nontraditional path he has taken in his career. Instead of chasing a spot in a high junior league, he said he “focused on becoming the best goalie I could be.”

“He’s a really mature kid, really focused,” Keefe said. “I mean, I think he wakes up every day thinking about how he can become a better hockey player and better person.”

Levi parlayed those extra years into a stellar Junior A season in 2019-20 with the Carleton Place Canadians, a Central Canada Hockey League team, and a breakthrough performance at the 2019 Junior A Challenge.

“It was sort of like an underground path where not many people were watching, but I was doing my fair share of work and I made sure when I got my opportunity I would take advantage of it, I’d be ready for it,” he said. “That’s what ended up happening.”

Levi had no idea a trade was happening until Panthers general manager Bill Zito called him around midnight Friday.

“It was a shock, but once I let it sink in, I was super excited,” Levi said.

The Sabres needed another goalie prospect. Now they have Levi and Erik Portillo in the pipeline behind Ukko-Pekka Luukkonen, who’s expected to be the Rochester Americans’ starter next season.

“It’s a great opportunity in Buffalo and they’re a great organization and they’re looking to rebuild,” Levi said, “and I’m really excited to hopefully be a part of that in the future.”