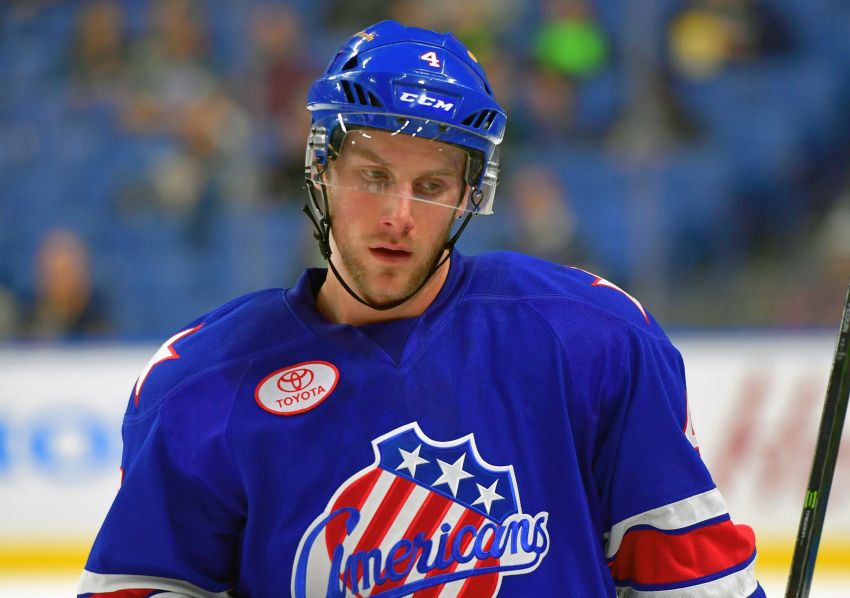 BUFFALO – The Sabres’ rash of injuries forced them to recall Taylor Fedun this morning. Will the defenseman play tonight against the Vancouver Canucks?

“I was the odd man out in practice today, so I assume I will not be,” Fedun said this morning after skating inside KeyBank Center.

The 1-4-2 Sabres are so banged up, they summoned Fedun from the Rochester Americans just so they have an extra player tonight.

“We’re pretty banged up,” Sabres coach Phil Housley said. “We got to get some bodies up here just in case something happens. Feds had a really good, strong camp.”

Still, the Sabres will use rookie defenseman Victor Antipin to replace Josh Gorges, who’s day-to-day with a lower-body injury. The Sabres scratched Antipin, who spent his entire career overseas before this season, the last four games.

“It’s good for me,” Antipin, who’s still learning the North American style, said of sitting out.

The Sabres will also scratch forward Zemgus Girgensons, who’s day-to-day after blocking a shot early in Tuesday’s 5-4 overtime loss in Vegas. Winger Seth Griffin will move in after sitting out two games.

In other news, Housley will give goalie Chad Johnson his third straight start. No. 1 goalie Robin Lehner felt sick and missed Thursday’s practice, although he skated this morning.

Tonight is the Sabres’ first home contest since Oct 9. They went 1-2-1 on their four-game road trip.

What can help the Sabres, notoriously slow starters, open the game well?

“Details,” Sabres winger Jason Pominville said. “I think you’ve always heard first game back from a road trip sometimes might be a little sloppy, some teams might have a tougher time. We got to … jump on a team that played last night. They should be the tired. We should be the team that’s ready to play and desperate.”

The Canucks lost 6-3 on Thursday in Boston.

In other injuries news, Housley said center Evan Rodrigues, out since hurting his hand four weeks ago, should start skating soon. Rodrigues is week-to-week.

After a wretched start at center, Reinhart, who has scored in two straight games, finally got going last week when Housley moved him to right wing. Injuries, however, forced him back to the middle.

“He found his niche going back to the wing and was contributing,” Housley said. “Going back to the middle, he’s still going to be effective, he’s going to play a 200-foot game. I really like the net-front presence he’s provided for us on our power play.”