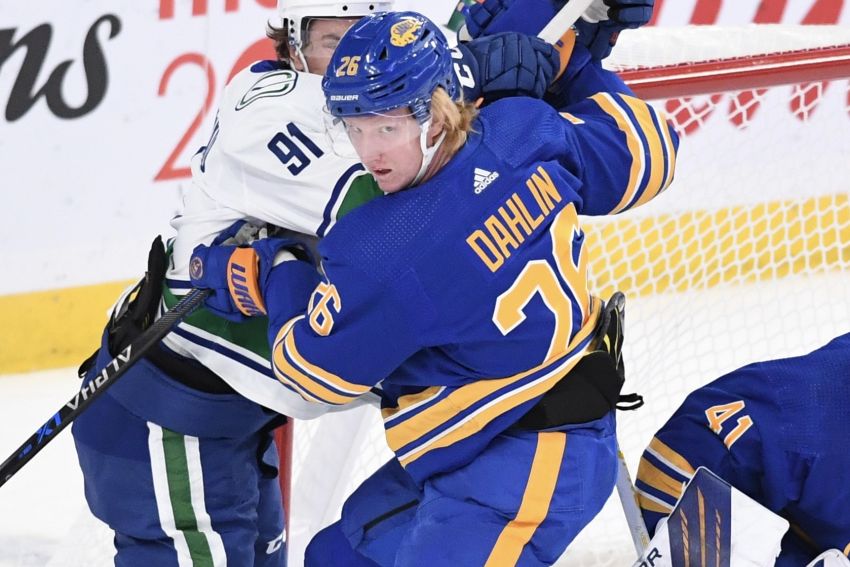 BUFFALO – This season, Rasmus Dahlin’s fourth in the NHL, the Sabres defenseman has been trying to calm down a little.

Earlier in his career, Dahlin’s competitiveness often overwhelmed him, and any mistake he made stayed with him.

“This is probably the first year I’ve been thinking about it more and more, so it’s a learning process,” Dahlin said after the Sabres prepared for tonight’s game against the Calgary Flames at KeyBank Center.

Dahlin, 21, has also had some help. The Swede’s defense partner the last four games, the affable Mark Pysyk, is perhaps the Sabres’ most calming presence.

“On the bench, off the ice, he’s such a nice and fun guy,” Dahlin said of Pysyk. “He makes me relax. I’m a competitive guy and he’s like, ‘Dude, relax, have fun,’ stuff like that. So I like playing with him.”

Since being partnered last week, Dahlin and Pysyk have been on the ice for six five-on-five goals for and zero against, according to NaturalStatTrick.com.

Pysyk’s no-frills, defense-first style has also rubbed off on Dahlin, who has often tried to do too much with the puck and created more trouble. During a recent game, Dahlin simply flipped the puck to center ice, making a safe play to get the Sabres out of danger.

“Playing a lot of minutes, I figure you can’t be perfect all the time,” Dahlin said. “You have to make those plays sometimes. That’s why I’ve been trying to learn the most this year to play a more complete game. Doing the right stuff out there, it’s not going to be flashy all the time. … I’m trying to play more like a D and be a guy you can trust.”

In Tuesday’s 2-1 win in Pittsburgh, Dahlin and everyone else on the Sabres’ power play couldn’t be trusted to score or defend. Not only did the Sabres go scoreless in five chances against the Penguins, they gave up a slew a chances up a man in the third period.

Coach Don Granato said he wants the Sabres to possess a five-on-five mentality on the man advantage.

“Obviously, just a shift in focus. I don’t think it’s a tactic thing because if you just played like you were five-on-five you would have broke the pressure needed, but a lot of times on the power play simply, if you want a visual, you go to your spots on the power play, even though you haven’t broken the pressure yet.

“So it might still be a one-on-one or a two-on-one on the puck and you’re spreading out to go to a setup and it’s something as simple or subtle as that. … For us, it’s focus, concentration and work. Those are foundation elements of our five-on-five game that for some reason have disappeared on the five-on-four.”

In lineup news, goalie Dustin Tokarski will be starting for the sixth time in seven games. He has never faced the Flames in his career.