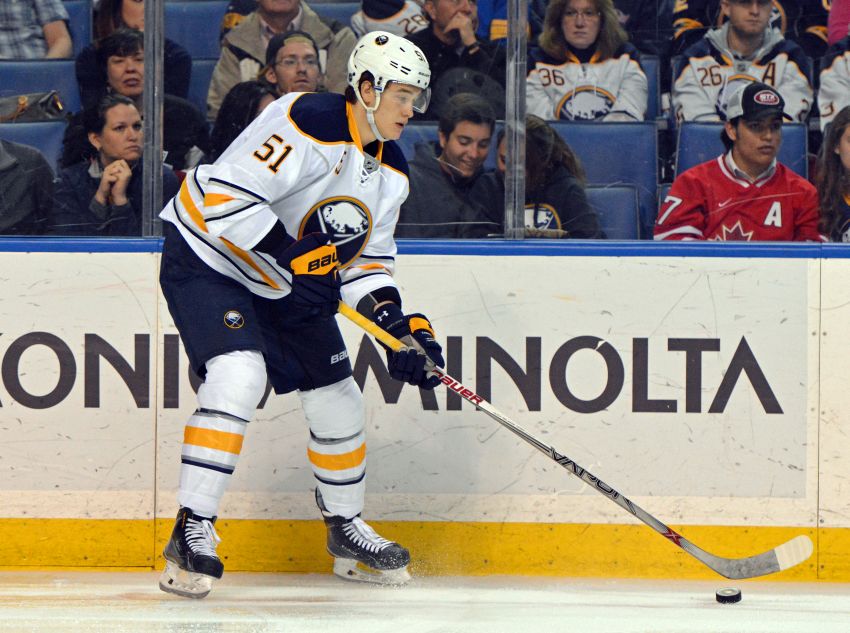 BUFFALO – Tim Murray called his end-of-season meeting with 19-year-old Sabres rookie Nikita Zadorov, whose maturity was an issue all year, an “interview.” In reality, the general manager’s chat with the defenseman was probably more of a lecture.

“A big part of … our talk today was me putting the onus on him to grow, to get better to get fitter and become a man,” Murray said Sunday inside the First Niagara Center. “We’ll see how that goes.”

Former Sabres coach Ted Nolan, who was fired Sunday, scratched Zadorov 11 of the first 12 games as he worked to develop better habits.

The Sabres started winning shortly after Zadorov earned his first regular action in early November. At times, the Russian looked like a future star, showcasing a slick, aggressive style. Still, he couldn’t stay in the lineup long.

The team formally suspended him Jan. 26 after he got stuck in the Dominican Republic following the NHL All-Star break. Nolan then benched him three games for being late to a team meeting again Feb. 22, a decision that was totally the coach’s.

“Whether I agree 100 percent with that or not, that was his call,” Murray said about Nolan. “Everything we do every day goes into decisions about our futures. So he thought what he did was right, and that’s fine by me.”

Zadorov, who had three goals and 15 points in 60 games, was scratched again a few times late in the season when bad habits crept back into his game.

The rough season appears to have taught Zadorov, who’s brimming with confidence, some lessons.

“Now I’m not going to make them anymore,” he said about his mistakes. “I think it’s in my head. I got more mature. Those guys, they helped me with everything. I just want to say thanks to them.”

Murray, of course, understands youngsters have some growing pains.

“So it’s how you handle those mistakes,” he said. “This does not pertain to Teddy at all. This is like you can’t expect a kid to come and talk to you at 19 years old. He’s not coming to you; you have to go find him and you have to seek him out and you have to offer advice and see how he accepts that.”

The 6-foot-5, 220-pound Zadorov hardly plays a simple game. He loves chasing the big hit. When asked if he felt he had established himself this season, he replied, “Maybe, like, if I hit (an opponent), probably they know that.”

That cockiness can’t creep into the dressing room, however.

Sabres defense prospect Mark Pysyk, who collapsed during a pickup basketball game Feb. 28, will likely return to game action this weekend with the AHL Americans, according to the Rochester Democrat and Chronicle.

Pysyk told the paper he apparently suffered a seizure related to dehydration the morning after playing two straight games with Buffalo.

The 23-year-old’s season appeared to be over. But after undergoing a battery of tests, Pysyk received the go-ahead to play.

“I’ve been to enough doctors hopefully for the rest of my life,” Pysyk told the paper Tuesday. “They did tests of my heart, on my head, nothing.”

Sabres goalie prospect Linus Ullmark, the 163rd pick in 2012, might need to undergo surgery on both of his hips, according to a report in a Swedish newspaper.

The rehab would be four-to-six months, so the 21-year-old Swede, who’s expected to join Rochester next season, could miss the start of his first North American campaign.

Ullmark is in the U.S. being evaluated. He just finished a season with MODO in the Swedish Hockey League.