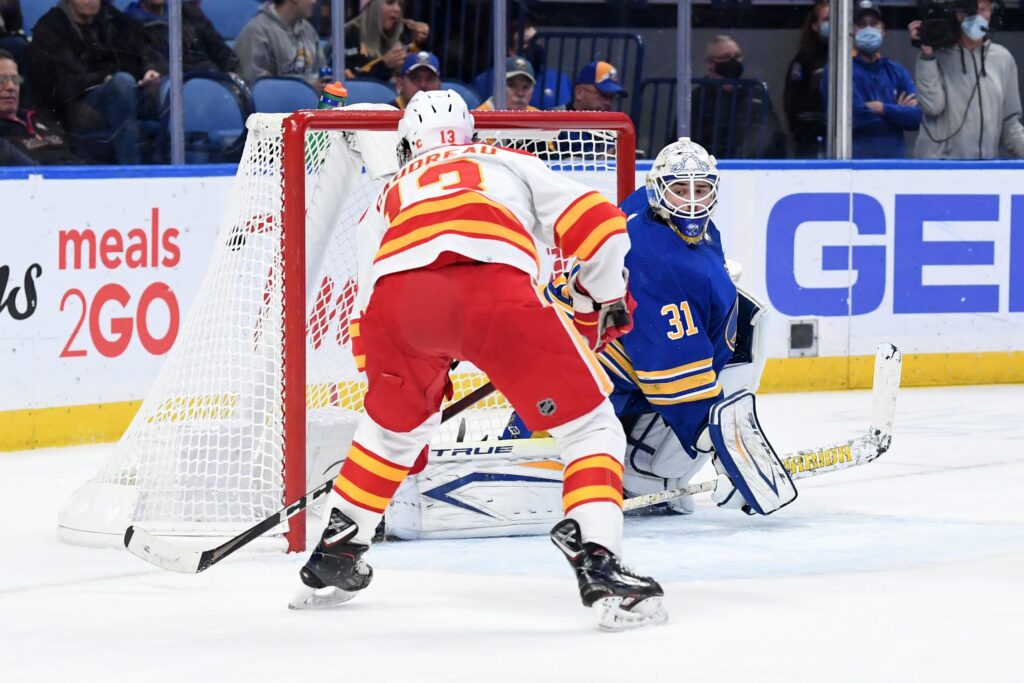 BUFFALO – After years of futility, there’s no denying the Sabres have started moving forward this season.

They entered Thursday a game over .500. At times, they’ve showcased a fast, aggressive style and executed a rigid system. They’re competitive most nights.

Still, the Sabres, as they did throughout Thursday’s ugly 5-0 loss to the Calgary Flames, can remind you they’re a rebuilding team short on talent.

The Sabres looked downright awful. After a weak first period, they imploded in the second, allowing two goals in a 36-second span to fall behind five goals.

“You look around the room tonight, everyone is pretty rattled,” Sabres winger Vinnie Hinostroza said. “I don’t think anyone played up to their potential and we’re the ones that know that.”

He added: “Kind of an embarrassing effort at home.”

Luckily, only 7,753 fans watched the game inside KeyBank Center.

“We lacked some of it today,” he said. “Not throughout the whole game, but definitely in parts.”

“We didn’t react competitively from that point and that tells me it was the whole mood of the night,” Sabres coach Don Granato said. “The guys just didn’t feel themselves. Those moments deflate you when you don’t feel you have your energy or you don’t feel your game. They just deflate you and that’s what I felt happened. I don’t think it was we didn’t want to respond.”

Girgensons acknowledged the Sabres’ wretched third period in Tuesday’s 2-1 road win over the Pittsburgh Penguins – they allowed 20 shots – carried over.

“Dustin was not the issue,” Granato said. “In front of him was the issue.”

The Sabres, who were shut out for the first time this season, have five games in seven days coming up, starting with Sunday’s road game against the New York Rangers.

While the Sabres aren’t expected to be a playoff team, at 7-7-2, they’re still in the race. The next week could decide if they stay in it.

“You’ve all seen us play our best this year, and it’s shutting guys down in the D zone, supporting each other, moving up the ice and getting by their D,” Hinostroza said. “That’s something we didn’t do in the first period and it kind of carried over throughout the game. We just have to find a way to get to our game as quick as we can because sometimes it’s just too late.”

He added: “That’s time for our group to make a statement.”

Sabres defenseman Colin Miller left the game after taking a hit from Milan Lucic in the corner with 11 minutes left in the third period and did not return.

Flames goalie Jacob Markstrom made 27 saves in his fifth shutout this season. The Sabres hadn’t been blanked this season.

One thought on “Sabres implode during second period, lose to Flames: ‘Embarrassing effort’”