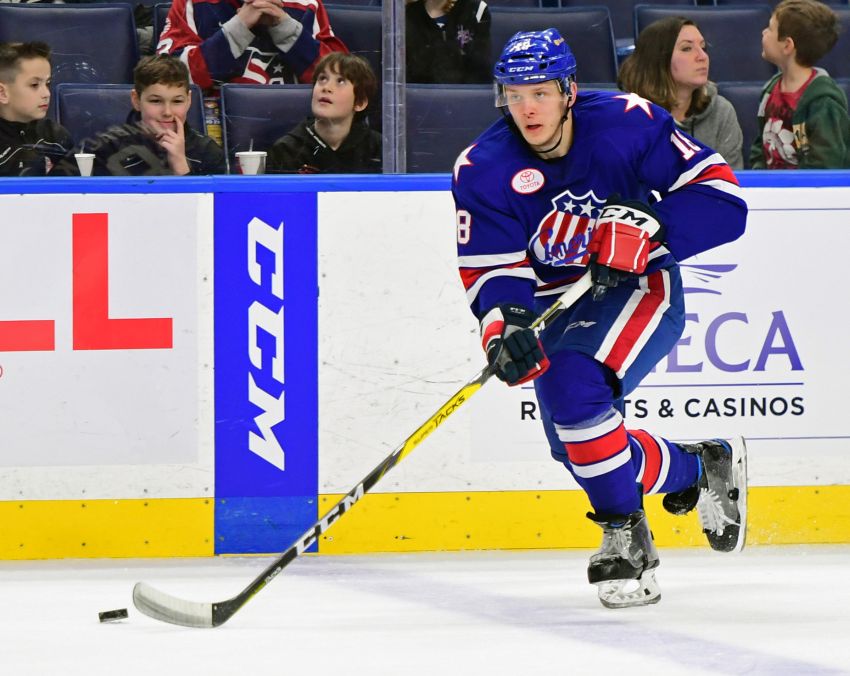 BUFFALO – For an AHL team mired in 13th place in a 14-team conference, the Rochester Americans possess some impressive young forward talent.

Justin Bailey, Nick Baptiste and Evan Rodrigues just returned from successful NHL stints. Hudson Fasching made the Sabres out of camp. If he hadn’t suffered a groin injury early on, he likely would’ve earned more NHL action. And while Alexander Nylander, 18, has struggled recently, the eighth overall pick is still an elite prospect.

Then there’s rookie Vaclav Karabacek, a winger the Sabres selected 49th overall with their third second-round pick in 2014.

Karabacek, who scored his third AHL goal in Wednesday’s 3-2 overtime win against the Utica Comets inside KeyBank Center, has rarely been mentioned as one of the Sabres’ top prospects over the last year or so.

A lower-body ailment he suffered in a preseason game and an injury-filled end to his junior career in the QMJHL helped the Czech lose some of his luster.

After starting his pro career late – he scored five goals and 11 points during an impressive nine-game stint with the ECHL Elmira Jackals – Karabacek made his AHL debut Dec. 14.

“He went to Elmira, found his game a little bit, played real well there,” Amerks coach Dan Lambert said. “We called him up and he was in and out at first. Now it seems like that line of (Tim) Kennedy, Dupuy and Vaclav have some nice chemistry.”

What has changed recently for Karabacek? Not much, really.

“I got work ethic,” he said. “I know that about myself, so I’m always working. I just keep a good attitude. I always go in with energy and smiling.”

He added: “It doesn’t get easier. It just gets more comfortable on the ice, I make more plays on the ice and stuff. But I still got a lot to learn.”

“He’s a guy that can finish around the net,” he said. “I didn’t realize those little plays that he can make – passes under the stick, he finds that open ice very well.”

Amerks captain Cal O’Reilly scored the winner 24 seconds into overtime. Fasching opened the scoring in the first period, capitalizing after the puck took an odd bounce behind the net to him alone in front.