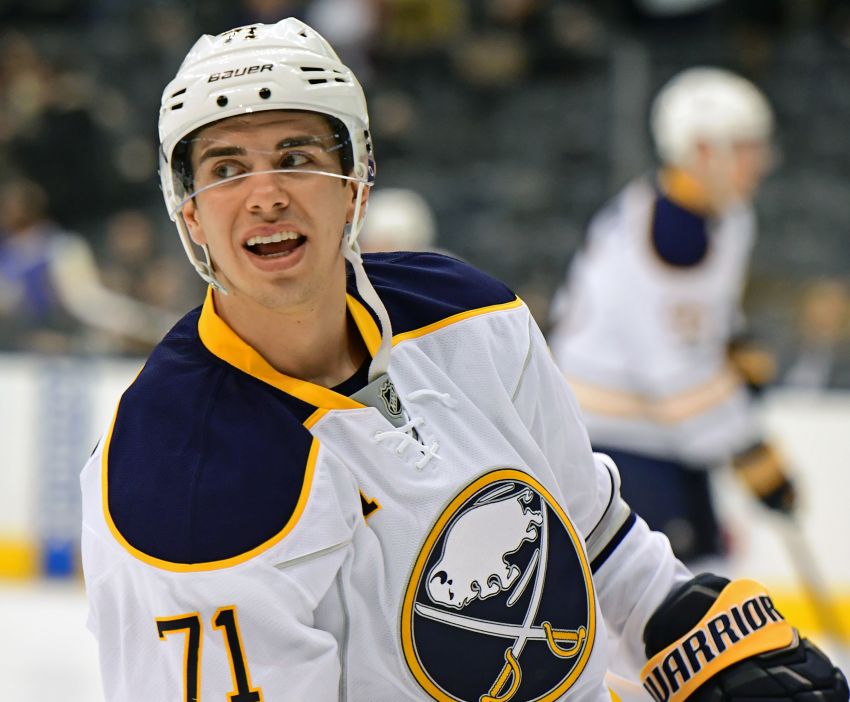 By the early 2000s, long after his dynamic 76-goal season with the Sabres in 1992-93, Mogilny was still an electrifying presence for some strong Maple Leafs teams.

“He was always trying something new,” Rodrigues said Saturday prior to the Sabres’ 3-1 win against the Leafs. “He always made some real fancy plays. He was an exciting player to watch.”

Rodrigues, 23, sounded happy recalling his warm memories of Mogilny. The second-year pro couldn’t stop smiling prior to his first NHL appearance in his hometown.

True, Rodrigues always seems to be grinning. But Saturday’s tilt, which was broadcast across Canada on “Hockey Night in Canada,” was extra special for Rodrigues, who, of course, grew up a Leafs fan.

“Watching ‘Hockey Night in Canada’ growing up, now playing, it’ll be a cool feeling,” Rodrigues said. “But I’m trying not to think about it too much and just prepare like any other game.”

The Sabres wanted a speedy center, so they recalled Rodrigues from the Rochester Americans on Saturday morning. They summoned him on an emergency basis Thursday but he sat out a 5-2 loss to Anaheim because winger Evander Kane was healthy enough to play.

Rodrigues played for the Amerks in Friday’s 3-2 loss to the Albany Devils, then took a car to Toronto.

Bylsma joked Rodrigues should’ve worn No. 22 instead of 71 on Saturday because he was occupying Johan Larsson’s spot between Marcus Foligno and Brian Gionta.

“That’s really what he’s got to do for us going into that position between those two guys,” Bylsma said about emulating Larsson. “He’s had a good amount of experience in the American Hockey League and done a real good job with it, really kind of earned this opportunity.”

It could be an opportunity to stick around for Rodrigues, who played his fifth NHL game. With Larsson out for the season with a dislocated elbow and wrist, the Sabres have struggled to find another center.

The 5-foot-10, 183-pound Rodrigues, a free agent from Boston University, has nine goals and 27 points in 44 AHL games this season.

A bone bruise will sideline Sabres defenseman Cody Franson two to three weeks, Bylsma said. Franson blocked a shot Thursday and had a walking boot on his left foot Friday.

Taylor Fedun replaced Franson against the Leafs and skated beside Justin Falk, his partner in Rochester earlier this season.

The injury could affect the Sabres’ plans for Franson, an unrestricted free agent following the season, before the March 2 trade deadline.

Defenseman are always in demand down the stretch, and as an established veteran with four seasons of 29 or more points, Franson figured to fetch at least a draft pick.

But if Franson, 29, hasn’t recovered by then, will there be any interest?

Franson has three goals and 16 points in 53 games this season.

Leafs coach Mike Babcock said Detroit owner Mike Ilitch, his boss 10 years with the Red Wings, “made you want to be a better man.”

Ilitch, widely considered one of the NHL’s premier owners, died Friday at age 87.

“He was committed to doing things right and what he touched to in business turned to gold,” Babcock said. “But he had that presence about him that he made you want to be better. He looked after all of us, gave us all the resources to have all the success you could ever ask for. But he had an appreciation of the hard work and stick-to-itiveness and getting things done.”