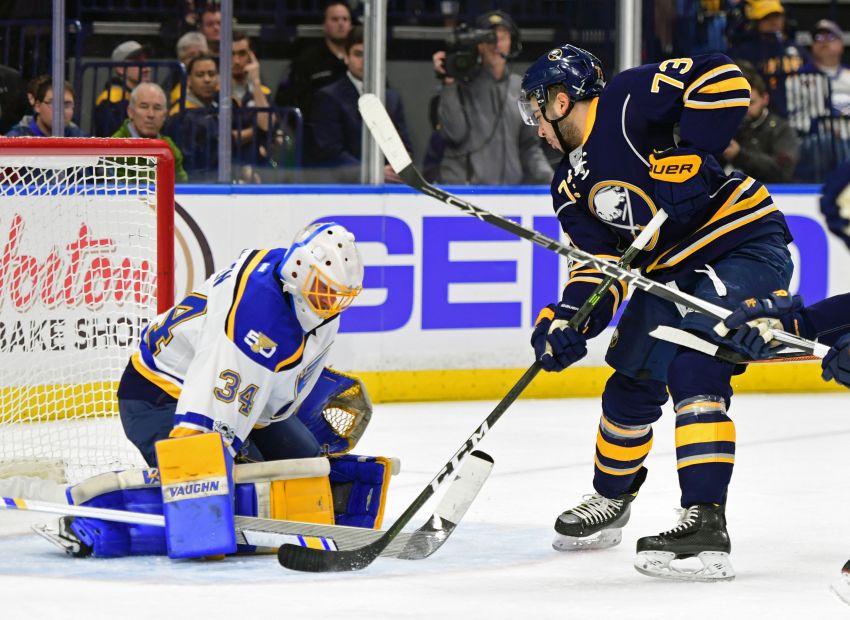 BUFFALO – A positive trend has developed in the last few months for the Sabres. Each time they recall one of their forward prospects from the Rochester Americans, the youngsters make a strong case to stick around.

After speedy winger Nick Baptiste’s impressive performance in Saturday afternoon’s 3-2 win against the St. Louis Blues – he scored his third NHL goal and recorded his first assist – the second-year pro could join that group.

“That’s kind of the development process we have started in Rochester,” Sabres coach Dan Bylsma said. “The coaches down there have done a great job of getting these guys ready to come up and play and be prepared to add, and you can see that with almost every call-up we’ve had.”

The Sabres summoned Baptiste prior to the tilt because winger Sam Reinhart was ill. Baptiste got the call about 9 in the morning, and instead of busing to Binghamton with his AHL teammates, drove 75 miles to KeyBank Center.

Baptiste was on the ice for St. Louis’ goal 91 seconds into the game, but he tied it at 9:34, taking Eichel’s nifty pass and backhanding the puck between St. Louis goalie Jake Allen’s legs.

“It was a great play,” Baptiste said of Eichel’s dish. “He does it all the time. He made a good move to the inside. I was able to kind of read it, get inside the D’s shoulder and he made obviously a great backhand pass to me.”

He added: “When I play with Jack, I want to just open up space for him, give him the puck and get to the net and use the shot to my advantage.”

“It’s Nick’s speed pushing the pace through the middle, it opens up some space,” he said.

“It gave me a confidence boost,” said Baptiste, who skated 11 minutes, 52 seconds.

Still, after the Sabres sent Baptiste back to the Amerks in mid-November, he didn’t sulk when he was bypassed for recalls.

“We’re young guys, just 21 years old,” Baptiste said. “There’s a lot of time. This is the process for a lot of guys, and it’s going up and down and how you kind of handle it. You got to go down there and play with confidence and work your way back up.”

“When you can have guys come up here and contribute like that, it shows the depth in the organization,” Sabres center Ryan O’Reilly said.

“We’re doing everything we can to get him ready,” Bylsma said.

With defenseman Cody Franson back Saturday after a bruised left foot sidelined him four games, the Sabres waived Taylor Fedun prior to the game.

Defensemen are always in demand at this time of year.

Update: Fedun has cleared waivers and been assigned to the Amerks.