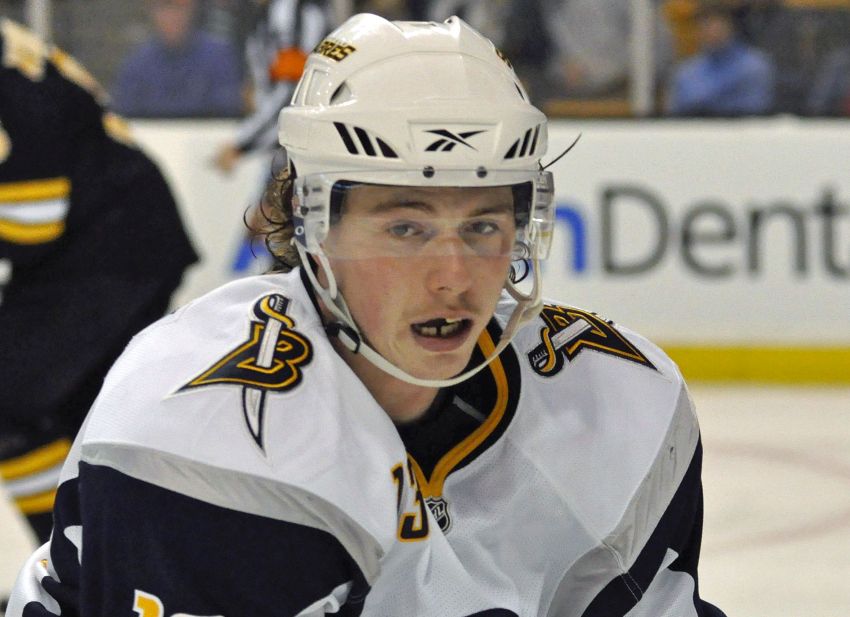 ROCHESTER – After a difficult few months in Sweden, South Buffalo’s Tim Kennedy was excited to return home and resume his career in his hometown organization.

Kennedy, 30, was waiting at a hotel Saturday before the Amerks’ game against the St. John’s IceCaps when the phone rang. Some Buffalo higher-ups informed Kennedy the Carolina Hurricanes’ affiliate, the Charlotte Checkers, had claimed him on re-entry waivers, which players returning from Europe must pass through.

“Then I went home to Buffalo, had a few conversations with Carolina about my situation,” Kennedy said Monday after playing in the Amerks’ 5-1 loss to the Binghamton Senators inside the Blue Cross War Memorial.

Kennedy and his wife, Janelle, have a son, Jackson, who was born Aug. 24, and twin toddler girls. He told the Hurricanes he wanted to stay close to his family.

“They did a very nice thing and they loaned me back here,” Kennedy said.

Technically, according to the Sabres, the Hurricanes transferred Kennedy’s AHL rights to the Amerks on Monday.

“I knew I’d have opportunities back here, but this is the place I wanted to play,” Kennedy said. “I’m from Buffalo, this is the farm team. My wife’s at home with the kids. It’s just a good situation. I hope I have a good second half here.”

Kennedy began his career in the Buffalo organization, playing 79 games. He spent all of 2009-10 with the Sabres. But the team bought out his contract following a large arbitration award, and he shuttled between the AHL and NHL for the next five years.

He spent last season in the KHL, splitting time between a Russian club – he had a difficult time adapting to some different expectations and eventually agreed to a buyout – and Jokerit, a team in Helsinki, Finland.

He never really found his footing in Sweden. After joining the team a month and a half late because of Jackson’s birth, he was injured. He played only 18 games, compiling two goals and four points.

It just wasn’t a good fit.

“It became a mutual choice,” Kennedy said of terminating his contract. “They wanted me to stay, but I thought it was time to leave and I just came back home.”

Kennedy, who has played 162 NHL games, should help the Amerks. The Michigan State product has 71 goals and 267 points in 335 career AHL appearances. He was an AHL All-Star in 2014-15 with the Hershey Bears.

He centered prospects Justin Bailey and Alexander Nylander on Monday.

“That was the first time I saw him play,” Amerks coach Dan Lambert said. “I believe that he’s a guy that has a lot of experience and he’s a guy that is able to provide offense for our hockey club.”

Kennedy played 14 games with the Amerks in 2010-11 when they were affiliated with the Florida Panthers.

The Sabres have assigned Nylander, the eighth overall pick in June, to Team Sweden for the upcoming World Junior Championship. Nylander, 18, has five goals, 17 points and a minus-11 rating in 29 games with the Amerks.