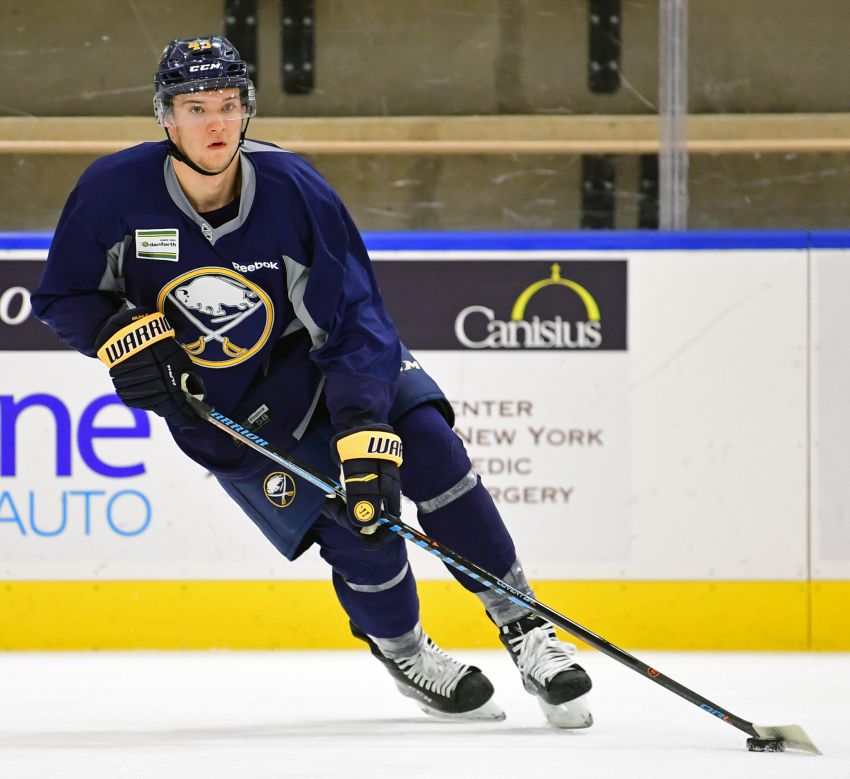 The Sabres are in no rush to promote Brendan Guhle. ©2017, Hickling Images, Olean Times Herald

ROCHESTER – The Buffalo Sabres have a plan for Brendan Guhle.

That’s why one-quarter into another miserable season, their top prospect is still developing in the AHL. That’s why after a stunning rash of injuries – the Sabres, incredibly, are 12 defensemen down the depth chart – the slick Guhle is playing big minutes in Rochester, not Buffalo.

The Sabres’ new regime wants Guhle, 20, to pay his dues with the Americans.

So Guhle, a second-round pick, 51st overall, in 2015, might stay in the minors a few more months, even all season. Remember, he looked ready for NHL duty during his three-game emergency recall from junior early last December.

“I’m happy where I’m at and I would be happy if I was up there,” Guhle said. “They did what they think is best for me and I totally believe in that.”

Taylor said: “He understands the process of it.”

Guhle’s short NHL stint raised expectations considerably. In fact, before the Sabres fired general manager Tim Murray, many observers believed Guhle would be a regular in Buffalo this season.

But new GM Jason Botterill, whose Sabres host the Columbus Blue Jackets tonight at KeyBank Center, retooled Buffalo’s weak blue line, adding more puck-movers and depth. Guhle hardly helped himself during training camp. After nearly cracking the Sabres twice as a teenager, he never seemed in the mix for a roster spot this year.

“I was definitely disappointed, not necessarily because they sent me down, just more my play,” Guhle said. “I didn’t think I played as well as I could’ve, that was the frustrating thing.”

Guhle, of course, sees his Amerks teammates going up ahead of him. So far, the Sabres have summoned defensemen Taylor Fedun, Casey Nelson and Zach Redmond.

“You see it and you hear about it, but I just try not to focus on it too much,” Guhle said of the recalls. “There’s nothing worse than getting in your own head, having it distract you from working on your game.”

Guhle’s game is usually fast and smooth. He often jumps into play and leads the rush, showcasing a veteran’s poise. He did that a few times Wednesday, another outing in which Taylor awarded him more than 20 minutes of ice time.

“His ice time is growing every day and he’s learning by his mistakes he’s doing and he’s also learning by his achievements, how well he’s doing by his skating,” Taylor said. “You see him a couple of those shifts how he flies and he gets on a two-on-one, you can’t teach that, and his instincts, those are the instincts that we want him to have.

“We want him to be in the offensive rush even though he’s a defenseman because he can recover.”

Guhle has already compiled three goals and 10 points in 16 games for the Amerks, who have started 9-5-1-1.

How has Guhle, who played 12 AHL games before this season, developed in his first weeks as a regular pro?

“Just confidence, just going out there and playing and having fun,” he said. “At the start of the year I was just kind of adjusting a little bit, I think. Lately I kind of found my groove a little bit more. I’m just rolling with it and we’re winning.”

“Coming to the rink in the morning, getting practice done with and having the rest of the day to do whatever you need to do, being at home, having my own place and cooking at night, just the guys are great,” Guhle said. “Yeah, I think it’s been good for me, I’ve been having fun.”