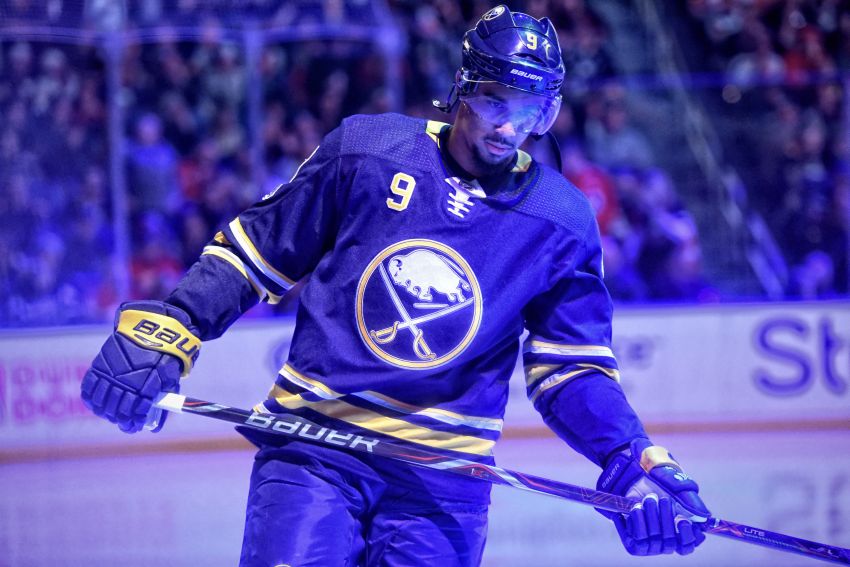 BUFFALO – Fresh off an uninspired loss that rankled coach Phil Housley and, allegedly, his players, the Sabres responded by going the first 17 minutes without a shot on goal.

Oh, the Sabres still generated a scoring chance early in Saturday’s 3-1 loss to the Carolina Hurricanes. For the second straight night, fourth-line winger Jordan Nolan, who has a 24-game goal drought dating back to Jan. 31, enjoyed a rare breakaway.

The crowd of 18,028, which started buzzing when Kane grabbed the puck, responded with a prolonged Bronx cheer.

It was another surly night inside KeyBank Center.

The 5-11-4 Sabres are a mess one-quarter into the season. Saturday was their fifth straight loss (0-3-2). They’ve scored one goal in five of the last seven games and have scored only 46 this season.

Incredibly, Kane, who scored the lone goal Saturday, has 11, a stunning 24 percent of the Sabres’ season total.

A day after Friday’s disappointing 3-1 loss in Detroit, the Sabres mustered a feeble response.

“It is testing my patience,” coach Phil Housley said of the Sabres at the 20-game mark. “I thought the last game in Detroit was really the end of my wick as far as remaining patient and making some adjustments and addressing that.”

He added: “I still feel that we’re not all on the same page.”

The Sabres, the Eastern Conference’s worst team with only 14 points, could be the NHL’s bottom-feeder soon. The 31st-ranked Arizona Coyotes’ 3-2 overtime win against the Ottawa Senators earlier Saturday moved them to within three points of the Sabres.

Despite their struggles against the Hurricanes, thanks to a 10 wild seconds, the Sabres almost eked out a win.

After Kane tied it 12:27 into the third period, he appeared to score again as he bulled his way to the net on the same shift. The crowd, so quiet all night, erupted.

But video replays overturned the goal because Kane kicked the puck past Darling.

“I didn’t agree with it,” Kane said. You go hard to the net. I … was pretty self-conscious of not making a kicking motion and kicking the puck in the net.”

Carolina winger Sebastian Aho then won it at 15:15, beating Sabres goalie Chad Johnson after defenseman Justin Falk mishandled the puck inside his own blue line.

“When I went to go pick it up it had landed and I thought it had settled enough to trust picking it up with my stick,” Falk said. “Soon as I went to go for it, the puck went over. Bad break.”

Housley has been overwhelmingly positive this season, and while he had some strong words following another loss, he also accentuated anything good his team accomplished.

“We battled back in the game,” Housley said. “We make a mistake and it ends up in the back of our net. I think bottom line is they took advantage of our mistakes and we didn’t take advantage of theirs. We had a breakaway, we had a partial breakaway (from center Johan Larsson), we got to score.”

When asked about the negative body language Jack Eichel often displays and the star center not getting back quickly enough on Williams’ goal – a Buffalo power play expired seconds earlier – Housley wouldn’t address it.

“Jack had a better game tonight, definitely was better in his own end and I really liked the speed he brought through the neutral zone,” Housley said.

Six weeks after signing an eight-year, $80 million contract extension, Eichel has compiled five goals and 16 points. At that pace, he would score 21 goals and 66 points over a full season.

Kane cited perimeter play as the reason the Sabres took so long to register their first shot.

“We have to shoot pucks from everywhere – bad angles, off the rush, off the power play, which I thought we did a pretty good job (of doing) except scoring in the second period,” Housley said.

“We put ourselves down, played in our own end, we missed the net on a few shots we had in tight,” Eichel said of the Sabres’ four-shot first period.