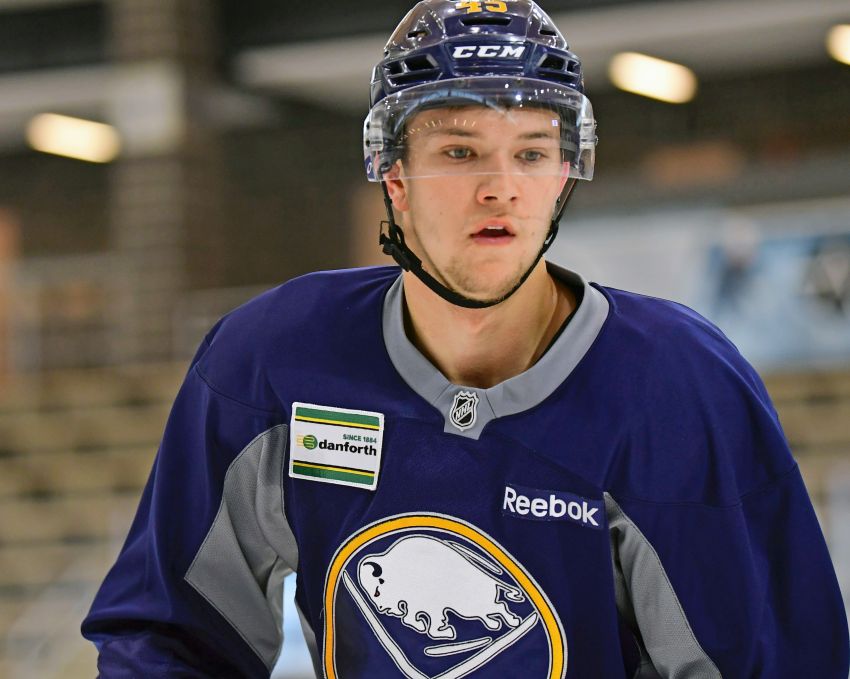 At just 20 years old, Guhle often looks like a veteran, swiftly moving the puck up the ice and getting to the net.

In Saturday’s 7-4 win against the Boston Bruins, Guhle zoomed up and dished across the zone to C.J. Smith before connecting on the return pass at the crease.

Before the Sabres changed regimes, it was widely assumed Guhle, who almost made the big club out of training camp the last two seasons, would stick in the NHL.

So Guhle could be ticketed for the Rochester Americans, at least early on in his rookie season.

The Sabres report for physicals today, the start of their first training camp under Botterill and new coach Phil Housley.

The camp, of course, will be filled with storylines. The Sabres cleaned house following their last-place finish, firing GM Tim Murray and coach Dan Bylsma. They plan to play a faster game, have fresh philosophies and a bundle of new players.

Guhle’s fight to make the team should be one of the most interesting stories to follow during the next three weeks.

Could he impress them enough to force his way into the lineup?

“You see the shot, you see the speed that he can play, join the rush, creating offense out of that,” Botterill said Monday. “He’s a young player, certainly a lot to work on, but that’s what we’re excited about, whether it’s in Rochester, whether it’s in Buffalo.

“We feel we’ve brought in a lot of good people into the organization with the coaching staff that can help defensemen … achieve another level.”

The Sabres, naturally, want to give their young players ample opportunity to make the club. Housley plans to utilize a speedy five-man attack, so maybe, just maybe, Guhle will be in the lineup come Oct. 5, opening night.

“We’re ecstatic to have Brendan in our organization, you look at just what he can bring to a game and the way the game is being played right now, the success of some teams … speed is a huge attribute out there.”

Here are some other stories to follow during camp:

With Brian Gionta, 38, a free agent and unlikely to be re-signed, the Sabres need a new captain. Botterill said he will work “very closely” with Housley to pick a new one.

So who could be in the mix? Center Ryan O’Reilly’s accountability and work ethic sets a high standard for his teammates. It’s often cliche to say a player hates losing and works hard. But O’Reilly, perhaps the Sabres’ best all-around player, takes every loss hard and is usually the last one off the ice following practice.

Winger Kyle Okposo is also well-liked and sets a high standard with his play. When he missed time late last season, Okposo’s leadership void was noticeable, and the Sabres fell apart.

Some fans probably want star center Jack Eichel to become the captain, but at 20 entering just his third season, he might be too young. O’Reilly, 26, and Okposo, 29, are better options.

The Sabres also brought back former captain Jason Pominville. The new regime, however, will almost certainly want a captain that wasn’t around for the Sabres’ struggles years ago.

At some point, whether it’s next week, next month or in July, Eichel will sign a mammoth long-term contract.

Botterill expressed optimism Monday a deal could be reached “shortly,” saying both sides want to get one done.

Eichel seems fine on playing the season without an extension and determined not to let any contract talk distract him.

If Eichel doesn’t sign a new contract before the season, it’ll be a notable story.

Former Sabres forward Jeff Parker passed away Tuesday, according to the NHL Alumni Association. He was 53.

Parker died in Minneapolis of complications from an infection that attacked his heart and lungs, according to TSN.

A sixth-round pick in 1982, Parker compiled 16 goals, 35 points and 163 penalty minutes in 141 NHL games. The Sabres traded him to the Winnipeg Jets with Housley in the 1990 blockbuster deal that brought center Dale Hawerchuk to Buffalo.

Housley and Hawerchuk are both members of the Hockey Hall of Fame.

Parker made his final four NHL appearances with the Hartford Whalers in 1990-91.