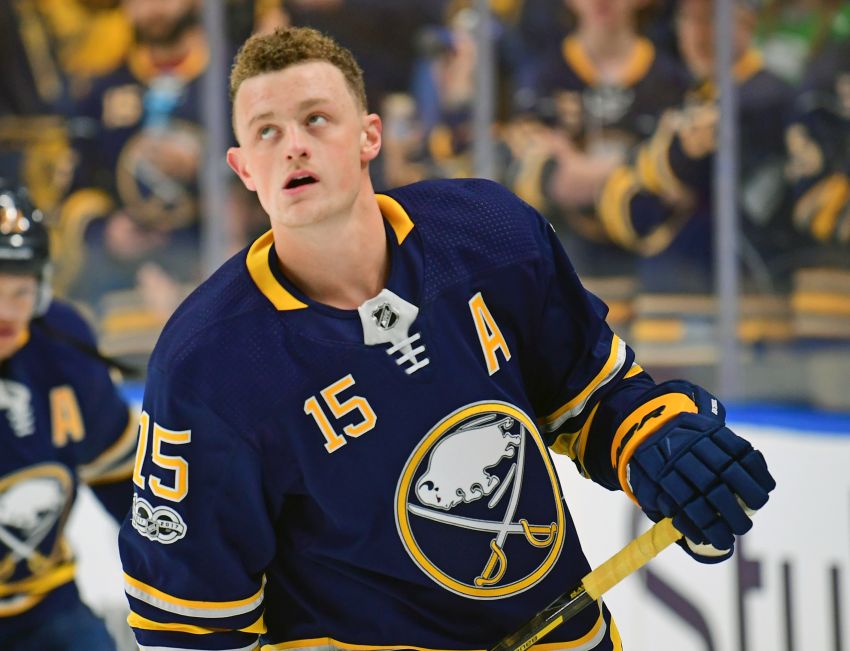 “There’s no third line,” Housley said this morning after the Sabres prepared for tonight’s tilt against the Columbus Blue Jackets inside KeyBank Center.

Eichel has struggled recently, mustering only one goal and five points in the last 11 games. Overall, he has five goals and 16 points in 20 contests, not exactly the production anyone expected after he signed an $80 million extension last month.

With their most dynamic player slumping, the reeling Sabres possess an anemic offense. Incredibly, they’ve scored one goal in five of the last seven outings.

So it’s easy to think moving Eichel from Evander Kane and Sam Reinhart, wingers he has showcased strong chemistry with over the years, is a demotion.

“I don’t think Eichel’s being demoted,” Housley said. “I think he’s such a terrific player I think you can put anybody on his wings.”

Did Housley have a message for Eichel this morning?

“No message, part of the game,” Eichel said.

How does Eichel look at the new lines?

“They changed the lines and I’m playing with two new players,” he said.

Of course, Housley must attempt to ignite the offense. The last-place Sabres have five wins. If they don’t go on a winning streak soon, their season is finished.

“Just giving the guy some fresh teammates, a new look, will revive some confidence and try to create some more balance in our lineup,” Housley said.

He added: “I just tried to look back at the chemistry some of the players had before. … We haven’t generated enough.”

Eichel displayed chemistry with Girgensons, who has one goal this season, and Pominville in the past. Eichel started the season as Pominville’s pivot.

“(Girgensons) works hard, he competes, he battles, he’s a pretty smart player so he understands the game,” Eichel said.

Goalie Robin Lehner will start, his 15th appearance this season.

In other news, center Jacob Josefson, sidelined the last 14 games by a lower-body injury, skated with his teammates this morning. Housley said Josefson is day-to-day.

Meanwhile, Housley said defenseman Rasmus Ristolainen, out the last seven games with an upper-body injury, has started skating but is week-to-week.