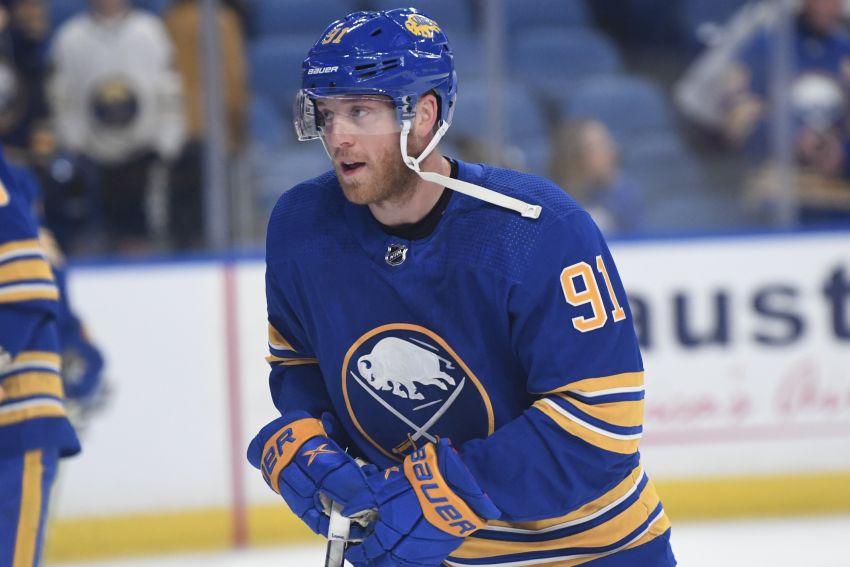 BUFFALO – As Sabres winger Drake Caggiula dropped down the lineup, his confidence in his offensive abilities nearly vanished.

Caggiula, 27, began his NHL career skating on scoring lines and the power play. Having just finished a dynamic college career, he was regarded as an offensive threat.

“I’ve always been an offensive player, all the way up until I got to the NHL,” Caggiula said prior to Tuesday’s 5-2 win over the Vancouver Canucks at KeyBank Center.

When Caggiula started being cast in more of a checking role, he said he lost sight of who he was as a player. He became too timid with the puck.

Caggiula started moving in and out of the lineup and bouncing around the NHL.

When the Sabres claimed him off waivers April 9, he joined his fourth team in two and half years.

But in Buffalo, Caggiula believes he can rediscover his scoring touch. He feels comfortable playing for coach Don Granato, who was an assistant during his first season with the Chicago Blackhawks.

“Having a familiarity with Donny from Chicago, he just kind of let me play,” said Caggiula, who has scored 44 goals and 87 points in 263 career NHL games. “… Kind of take the chains off me, just let me run. I think that’s been a big thing for me and just over the summer is kind of getting my mind in the right space and doing the right things to prepare for the season, being a little bit more selfish, not deferring to anybody.

“Just playing my game and doing what I do and I think the goals and stuff will come. It’s just playing the right way all the time and not being afraid to make plays.”

Caggiula made one of the biggest plays in Saturday afternoon’s 2-1 shootout win over the Arizona Coyotes, grabbing a long stretch pass and zooming into the zone before center Cody Eakin buried his rebound.

“You got to instill confidence in yourself,” Caggiula said of how he can produce more offense. “You got to want the puck.”

Granato believes Caggiula’s competitive side has helped him adjust to a checking role.

The 5-foot-10, 176-pound Caggiula has spent the first three games this season skating at left wing beside beside centers Dylan Cozens or Arttu Ruotsalainen and Anders Bjork.

After a tough few seasons, settling into a regular role has been nice. Caggiula impressed the Sabres enough during his 11-game stint last season he signed a one-year, $750,000 contract July 27.

Last year, he did not did not ink his deal the Arizona Coyotes until days before training camp opened.

“It’s a big difference, obviously, for the mental side of the game, taking care of the family – all that sort of stuff,” Caggiula said of re-signing early. “I mean, those are all things away from hockey, but it plays such a big, important role during the season. …

“It’s a fresh opportunity, somewhere where I felt very comfortable and I was very happy to get it done and I’m very happy to be here.”

Ex-NHL defenseman Dan Girardi, an interim assistant coach in charge of the blue line under Granato last season, has been on the ice with the Sabres all season helping run practice.

Girardi shifted back into his role as a development coach this season.

“I don’t think of Danny as a development coach,” Granato said. “He (has) too much experience. He did a tremendous job last year instilling some confidence in our defensive group, even our whole team. So he’s respected by everybody here. And any time you can get him around our guys more, even our coaching staff, the better.”

The Sabres scratched winger John Hayden and defenseman Christian Wolanin, who was claimed off waivers Saturday.

Ullmark signed a four-year, $20 million contract with the Bruins on July 28.

The Sabres recognized equipment manager Dave Williams during a stoppage Tuesday for his 2,000th career game.