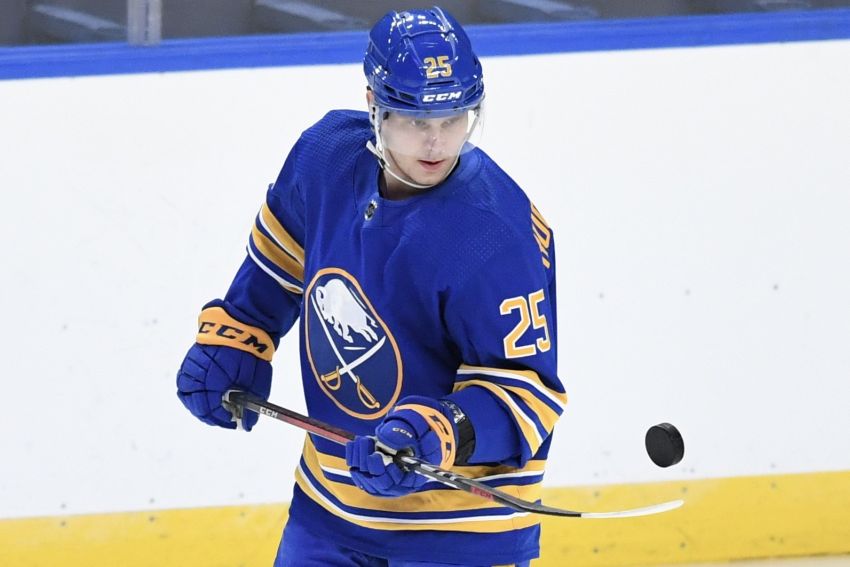 In Ruotsalainen, they sat out one their most intriguing young forwards. The Finn, 23, enjoyed regular duty over the final month last season, compiling five goals and six points in 17 games.

In Butcher, they sat out one their higher-profile offseason acquisitions. The American, 26, compiled 74 points over his first two NHL seasons.

The Sabres, despite their rebuilding status, built up some depth during the summer. So coach Don Granato had some options for Thursday’s 5-1 win over the Montreal Canadiens.

Granato recently said he expects everyone will receive an opportunity as the 82-game season progresses. He doesn’t want to hear any complaints. He believes sitting out one game isn’t a big deal.

“Our players, our group of guys are all competitive people that are capable,” Granato said Monday inside KeyBank Center. “I’m not going to get too worked up on an opening lineup because you play 82 games and that’s how I’ll present it to the three guys who won’t be playing. We play 82 games, spare me the drama of being a healthy scratch. We’re in it for the long haul and so it has nothing to do with being a healthy scratch.

“Just like when I put five guys on the ice, I’m not telling 15 they’re not good enough to go on the ice right now. So we’re not going down that road. It’s just a waste of mental energy. So we’ll have three guys out. There’ll be three good players that won’t play.”

The Sabres honored the late Rene Robert, a member of the legendary “French Connection” line, by painting his No. 14 on the ice behind the nets and playing a pregame tribute video. Robert passed away June 22.

Granato said prior to the game he has no problem mixing up kept his lines.

“I will always move things around based on energy and flow and based on who’s in a rhythm and not in a rhythm,” he said. “It’s just get in moment, read and react. Don’t take it personal. I tell the players that all the time, it’s just, ‘Some nights you have it, some nights you don’t and move on.’ As I said last time, no drama, just play.”

With his second-period power-play goal Thursday, Sabres winger Victor Olofsson has scored 58 percent of his career goals – 21 of 36 – on the power play.

The Swede, 26, has often said he wants to evolve and become a stronger five-on-five presence.

“I feel like I’ve always been a good five-on-five guy,” Olofsson said Tuesday. “It’s just … maybe the transition into the smaller ice (in North America) and, obviously, the NHL is the best league in the world and there’s not a lot of space out there.

“So I got two full seasons now in my bag. I feel like I’ve learned a lot during these two years. I feel like I’m only getting better and better. So I feel confident that it will come eventually.”